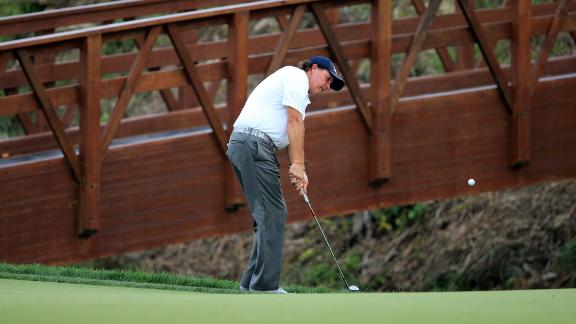 LOUISVILLE, Ky. -- Rory McIlroy celebrated his final birdie with a smile and a slight pump of his fist, knowing that 8-foot putt gave him the outright lead Saturday in the PGA Championship.

He's just not used to it being so crowded at the top.

McIlroy has won all three of his majors with the lead going into the final round -- by eight shots at the 2011 U.S. Open, three shots at the 2012 PGA Championship, six shots last month at the British Open.

More rain in the morning at Valhalla allowed for a deluge of birdies in the lowest scoring round in PGA Championship history. Six players had a share of the lead at some point. McIlroy could see it on the leaderboard. He could hear it on a golf course resounding with cheers from every corner.

The 25-year-old from Northern Ireland found an extra gear, closing with three birdies on the last four holes for a 4-under 67 and a one-shot lead over Bernd Wiesberger. Right behind were Rickie Fowler and Phil Mickelson. Still very much in the picture were Jason Day, Henrik Stenson and Louis Oosthuizen.

"Tomorrow standing on the first tee is going to feel different than how it felt a month ago at Hoylake because you don't have that ... it is going to be a shootout," said McIlroy, who was at 13-under 200. "You know the conditions are soft. Guys are going to make birdies. And you know that you're going to have to make birdies as well."

He did his part late in the round, rolling in a 20-foot birdie putt on the 15th hole, hitting 9-iron from 172 yards that landed with a splat next to the hole for an easy birdie on the 16th hole, and getting up-and-down from a bunker on the final hole.

"It's not the biggest lead I've ever had," McIlroy said. "But I'm still in control of this golf tournament."

Sunday is shaping up as a thriller, typical of the final major of the year.

Wiesberger closed with three straight birdies -- the three putts were a combined 3 feet, 6 inches -- for a 65. Playing in only his sixth major championship, the 28-year-old Austrian now gets to play in the final group at a major with the No. 1 player in the world.

"I've not been in a contention in a major championship, so I don't know how it's going to turn out," Wiesberger said. "I'm just trying to enjoy it as I did today. ... From now on, it's just a bonus, really."

Fowler, a runner-up in the last two majors and the first player since Tiger Woods in 2005 to finish among the top five in all three of them, gets one last crack. He played bogey-free for a 67 and was two shots behind.

Fowler will be playing in the penultimate group with Mickelson, the five-time major champion who turned his game around with a strong finish. Right when he looked to be fading from contention, Lefty turned it on with a long birdie putt on the 14th hole, two more birdies, and then he narrowly missed an eagle putt on the final hole. He had a 67 and was three shots behind.

"That birdie putt on 14 was really the one that got me going, because I needed to finish strong to get back in it," Mickelson said.

Mickelson was at 10-under 203 with Day, who played in the final group with McIlroy on Saturday and had to settle for a 69.

The PGA Championship does not bill itself as the toughest test in golf. It assembles the best field of the majors and lets them slug it out over four days. Add a super soft course from morning showers, and cheers rained down from every corner.

The average score was 69.57, though it felt easier to former Masters champion Adam Scott, one of nine players with a 66 or better.

"Doesn't get any easier," said Scott, who was six behind. "Seems like 4 or 5 under is about even par today."

For all the birdies, two pars early in the round were important. Day hooked his tee shot so badly on the second hole that it cleared the stream and landed in a bog. It eventually was found in knee-high vegetation. Day had to remove his shoes, roll up his pants and wade across the stream to get there. He blasted across the fairway into the rough, hit wedge onto the green to 8 feet and made it.

The tee was moved forward on the par-4 fourth hole, making it play 292 holes. Seven players made eagle. McIlroy was not one of them. He hooked his tee shot into the woods and had to take a penalty drop to get a clear look at the green. McIlroy made a 12-footer for par to stay in the lead, and he made birdie on the next hole.

Back and forth it went all day. Fowler, Day, Wiesberger and even Ryan Palmer and Jim Furyk took turns joining McIlroy atop the leaderboard. Through it all, Boy Wonder never fell back.

And that's what makes it hard on everyone else chasing him Sunday.

McIlroy is coming off a wire-to-wire win at the British Open and rallied to win a World Golf Championship in his next start. He goes after a third straight victory from a familiar position -- in the lead.

Unlike his other three majors, he has hardly any margin for error and a lot more players chasing him.

"I'll take a win any way it comes," McIlroy said. "If that means having to scrap it out with a couple people coming down the stretch, of if I can give myself some sort of lead going down the back nine ... I don't think it would give me extra satisfaction winning by one or two or scrapping it out."

McIlroy Leads After Third Round
Rory McIlroy discusses his third-round 4-under 67, which gives him a 1-stroke lead heading into the final round of the PGA Championship.

Digital Drive: Who Can Top McIlroy?
Bob Harig and Tom Rinaldi recap Rory McIlroy's third round at the PGA Championship and reveal the golfer who could threaten his chances at winning.