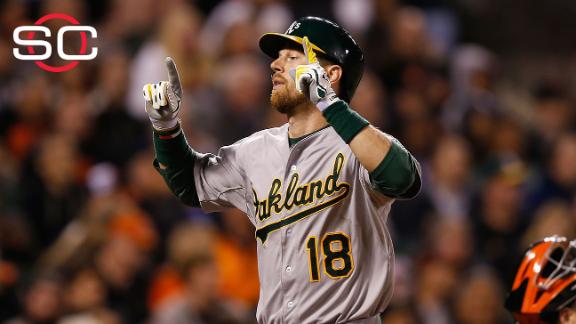 "He's going to be great for us," Royals manager Ned Yost said Tuesday night. "He's a tremendous switch-hitter. He's a really good run producer from both sides of the batter's box. He can play multiple positions. He gives us a lot of versatility. He's definitely got a winner's mentality."

He joins a Royals team that leads the AL Central a season after beating Oakland in the wild-card game on the way to its first World Series in 29 years and a seven-game loss to San Francisco.

"I'm already joining a team that's already a great team," Zobrist said Tuesday. "And the addition of Johnny Cueto, you got to believe there's going to be a lot more wins coming over the next couple months. I'm super excited about it."

Zobrist could fill a void in left field and play some second base. Left fielderAlex Gordonis expected to be out until at least late September with a strained groin he suffered just before the break.Jarrod DysonandPaulo Orlandowere platooning at the position, but Moore sought an upgrade until Gordon's return.

Having Zobrist available to play so many spots also will give Yost an opportunity to rotate players and rest others down the stretch to keep everybody healthy and fresh for what the Royals hope is another World Series run.

Information from ESPN.com's Jerry Crasnick and The Associated Press was used in this report.