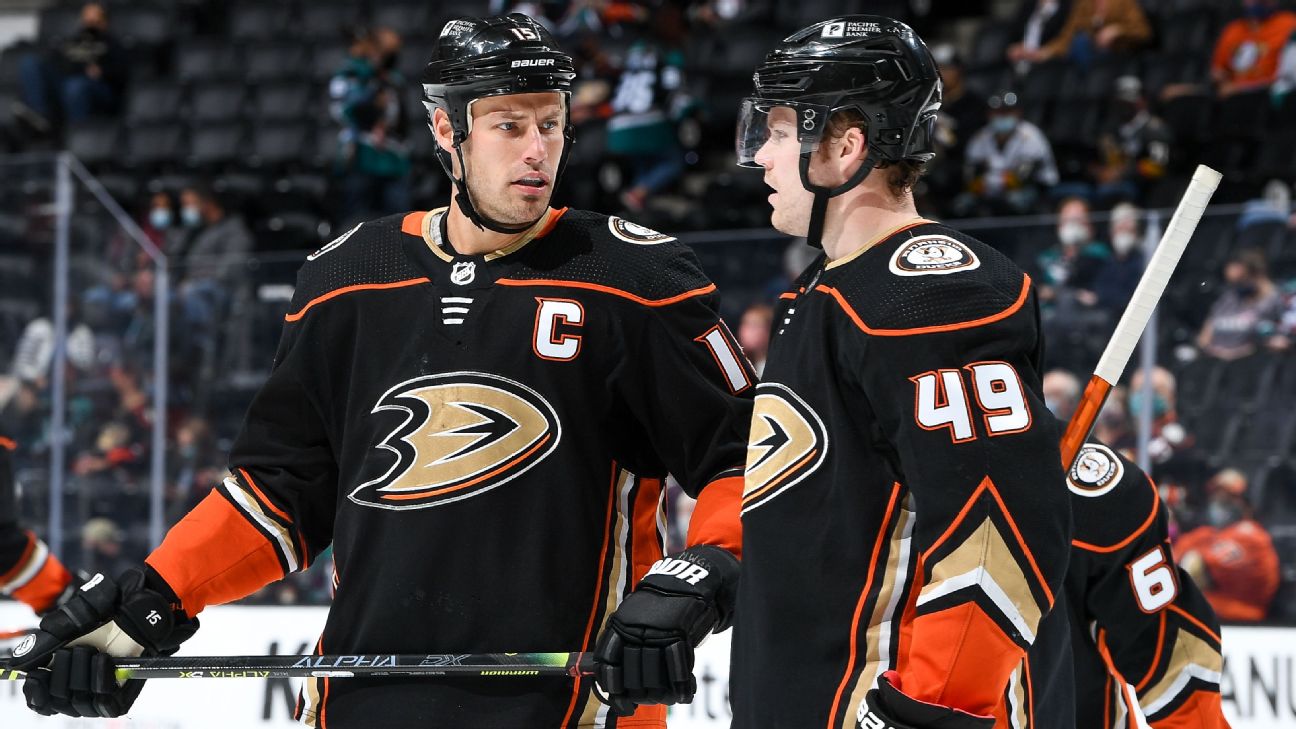 ANAHEIM, Calif. -- After 16 seasons in the NHL, there wasn't much Ryan Getzlaf had not experienced.

Getzlaf finally got his first taste of free agency before agreeing to terms on a one-year contract to remain with the Anaheim Ducks on Wednesday.


"This was a unique opportunity and a unique experience for me, and something I hadn't been through my whole career, so it was a fun day," Getzlaf said on a videoconference call. "I learned a lot of things today and ultimately ended up exactly where I wanted to be."

The deal should allow the 36-year-old Getzlaf to become the franchise's career leader in points this season. He has 982 points in 1,101 games and needs seven to pass Teemu Selanne's 988.

Getzlaf described the upcoming milestone as a "little reward," one that is especially meaningful given the respect he has for Selanne after playing together for nine seasons.

However, it was family considerations that led Getzlaf to stay -- his own and the one he's built with Ducks teammates, coaches and staff.

"When I talked about possibly moving somewhere, possibly uprooting my family, leaving my Ducks family behind, it was a scary thought," Getzlaf said. "There was a lot that went into it and a lot of discussions over the last few days me and my wife had. Even my kids, we talked a little bit. And then there's the Ducks family with everyone around the rink, the staff, and first and foremost the fans that we're excited to have back this year.


"Ultimately, we worked through it ... and just so grateful for the opportunity to be back again."

Getzlaf has been a constant for the Ducks since he was drafted 19th overall in 2003. He made his NHL debut in 2005 and emerged the following season in helping Anaheim win the Stanley Cup, leading the team with 17 points in the postseason.

"It was always our intention to sign Ryan, and we are thrilled he chose to stay," Ducks general manager Bob Murray said in a statement. "His loyalty to this franchise is unique in pro sports, and it is our hope he remains a Duck for his entire career."

Getzlaf had five goals and 12 assists in 48 games this past season, but his role was reduced as the Ducks worked to integrate younger players into the lineup. Getzlaf was used on the wing and as a fourth-line center late in the season to give Trevor Zegras, a first-round pick in 2019, the chance to play as Anaheim's top center.


There were no discussions about how he might be used this season in discussions with Murray and Ducks management, Getzlaf said. That was more than fine with Getzlaf.

"At no point during this day or over the past week have I been looking for any promises about ice time, about where I'm gonna play. To me, that stuff should all be earned during training camp, during the exhibition (games), during the start of the season," Getzlaf said.

No matter where or how much he plays, Getzlaf is excited about the chance to help the Ducks get back to winning, as they have for most of his career.