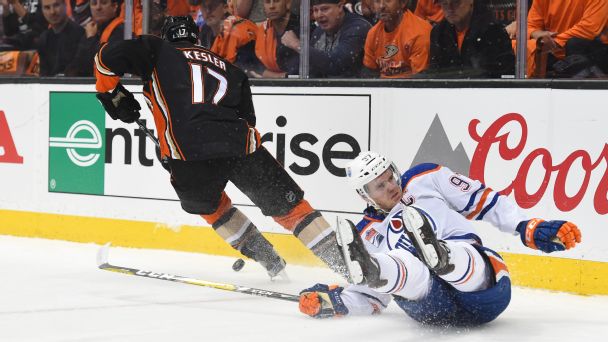 ANAHEIM, Calif. -- Ryan Kesler didn't take long to send the message to the Edmonton Oilers' top line of Connor McDavid, Leon Draisaitl and Patrick Maroon that he was going to make the second-round series with his Anaheim Ducksinto a house of pain.

After an early faceoff in the Oilers' end in Game 1, Kesler leveled a hard cross-check to Draisaitl's head. Unfazed, the young Oilers star skated away as the play headed down the ice. But the gauntlet had been dropped -- Kesler's chops, verbal barbs and stares weren't going to let up. It was on.

For two periods, the matchup worked mostly in Anaheim's favor as Kesler's shutdown line -- completed by linemates Andrew Cogliano andJakob Silfverberg-- did a masterful job containing two of the game's most dynamic young players in McDavid and Draisaitl. And if Edmonton's 5-3 win in Game 1 is any indication, it's a matchup that could ultimately decide this series.

"I need to find a way to create some space. He's always sticking around me," McDavid said of Kesler. "It's hard to create space that way, but that's his role and he's going to play that way. We can expect that. He's that kind of player. He'll get under your skin and all that."

Described as "hard to play against" by even his own teammates, Kesler aggressively worked over his young opponents in Game 1. It backfired momentarily in the first period when he took a tripping penalty against McDavid. Of course, the trip came immediately after Kesler lifted his stick into the superstar captain's face, so he made it count.

Anaheim killed off the penalty as McDavid and Draisaitl were ultimately left with no choice but to settle in for a long night -- and, potentially, a long series. More of the same is expected in Game 2, which is Friday (10:30 p.m. ET).

"Our players, and probably Connor in particular, obviously they'll be a target for their checkers. They understand they have to play through this stuff," Oilers coach Todd McLellan said before Game 1. "I go back to our regular season. There were many nights where we let the matchup happen so that they could grow and experience it. We won't get away from it, but we will play through it."

The Oilers' top line will have to play through Kesler's full arsenal of tricks again in Game 2. So far the tactics include knocking McDavid's stick away and repeated jawing after the whistle. And for 40 minutes in Game 1, the distractions seemed to be working.

"The first two periods, I didn't do much at all," Draisaitl said of his Game 1 efforts. "You try and stay calm. You try not to get too angry or too wound up about it. I thought we did a really good job. We stuck with it and had a few good shifts after."

After two periods in Game 1, Edmonton's line had accounted for no shots. Not a single shot for three players who combined for 86 goals and 219 points during the regular season. Draisaitl set up Mark Letestu's second-period power-play goal, so the contributions were there. But considering the degree to which the McDavid line was shut down, it was impressive that the Oilers opened the third tied 1-1.

Then it happened. The seas parted, McDavid and Draisaitl found space and the Oilers found their game. For a few minutes, at least. But it was all they needed.

"We scored and that forced them to open up a little bit, maybe," McDavid said. "They did a good job battling back."

After McDavid and Draisaitl set up Letestu's second power-play goal of the night to give Edmonton a 2-1 lead in the third, the pair was back on the ice less than two minutes later. And for one of the few times all night, they found themselves playing 5-on-5 without the Kesler line shadowing them. Perhaps spotting the mismatch, Kesler jumped on the ice late in the shift. By then, Draisaitl was carrying the puck into Anaheim's zone as the ice began to open up. A quick drop pass to Adam Larsson, who scored his first of two goals on the night, helped Edmonton's top line to suddenly breathe easier.

They wouldn't see Kesler's line again the rest of the night. Down 3-1 in the third, Carlyle moved the checking line away from McDavid to give the trio better offensive opportunities.

"It was based upon where the faceoffs were," Carlyle said of the decision. "We were down 3-1 and I felt that the way the game's developing that we needed to put our best people on the ice in the offensive zone."

Patrick Eavesand Silfverberg scored for the Ducks to tie it, but it was clear that McDavid and Draisaitl were enjoying their remaining shifts without Kesler whispering sweet nothings into their ears. Their mere presence opened up the ice just enough for Larsson to rush end-to-end before banking the winning goal off Ducks goaltender John Gibson. Draisaitl wrapped things up with an empty-net goal to secure a four-point night, the first in the playoffs for an Oilers player aged 21 or younger since Wayne Gretzky.

All in all, it was a big win for two young stars who spent much of the night battling arguably the league's best shutdown line. They better buckle up, because they'll probably see plenty more of Kesler & Co.