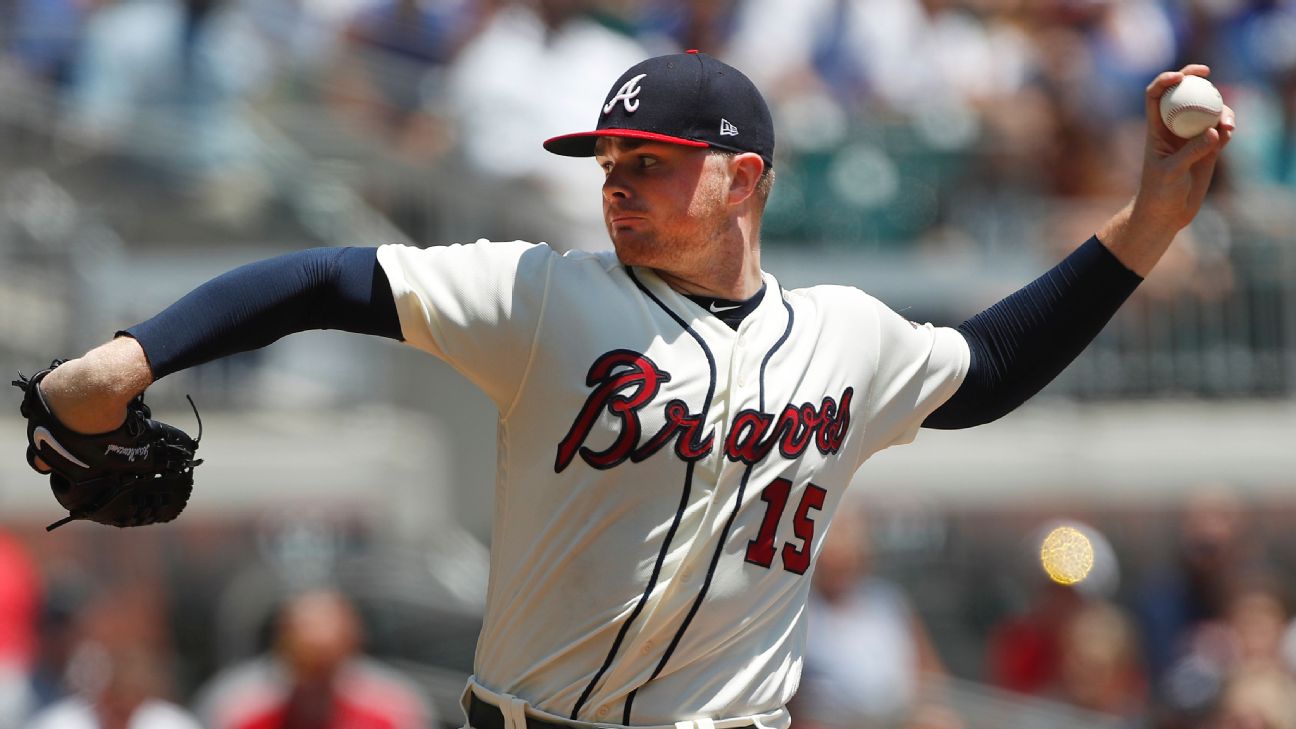 Sean Newcomb had been throwing fastballs all game long. He was one strike away from finishing off the first no-hitter for the Atlanta Braves since 1994, so his 134th pitch of the game was another fastball, his 102nd, easily the most for a pitcher in a game in 2018.

It was one fastball too many -- or at least one fastball in the wrong location. Catcher Kurt Suzuki set up high and away with a 2-2 count on Chris Taylor, but Newcomb's pitch ended up inside and Taylor lined a base hit past diving third baseman Johan Camargo.

Kent Mercker remains the last Braves pitcher to throw a no-hitter, a gem that came so long ago that Chipper Jones, who was elected to the Hall of Fame on Sunday, had yet to play his rookie season with the Braves.

Still, it was a tremendous outing for the big lefty and a much-needed 4-1 victory over the Dodgers as the Braves snapped a four-game skid.

This has been the season of the no-hit bid and Newcomb appeared on shaky ground when he was at 100 pitches through seven innings. He got through the eighth on 17 pitches, striking out Yasiel Puig swinging on a 93 mph heater at the top zone, and even though Newcomb was already at a season-high pitch count, manager Brian Snitker sent him back out for the final three outs.

He almost got there. It took him nine pitches to get Cody Bellinger for the second out, however, finally getting him to fly out to shallow right field after Bellinger had fouled off four pitches. He got ahead 1-2 on Taylor with four straight fastballs and threw a changeup on pitch No. 133, a good pitch off the outside corner that Taylor managed to foul off. That was the pitch Newcomb needed.

Snitker took Newcomb out and gave him the ball back, but Newcomb simply tossed it into the dugout as he walked off mound. Who wants a souvenir from a one-hitter? He joins this unfortunate list, courtesy of Elias, of starters since 2000 who lost a no-hit bid with two outs and two strikes in the ninth:

He threw his four-seam fastball 76.1 percent of the time, the highest rate of his career.

He threw 102 four-seam fastballs, 13 more than any pitcher in a game this season.

His average fastball velocity was 93.5 mph, his third highest of 2018.

He threw 30 four-seam fastballs up and in, tied for fifth most by any pitcher this season.

Newcomb is 10-5 with a 3.23 ERA, and his rise in his first full season has been a big reason for the Braves' success. There's been some inconsistency along the way -- he had three straight scoreless outings in early May, but began July with back-to-back outings of less than four innings -- but it's performances like this one that showcase a pitcher with top-of-the-rotation ability if everything comes together. The walk rate is still a little high at 11.6 percent, but he's tough to hit with a .204 average allowed and a .328 slugging percentage against.

Remember, while Newcomb was a first-round pick by the Angels back in 2014, he didn't come with a ton of experience, playing two seasons at small-conference University of Hartford. He's thrown his changeup twice as often as he did in 2017 with positive results and while he doesn't throw his curveball a lot (14.4 percent of the time), batters are hitting just .111 against it in 57 plate appearances ending with the pitch.

He didn't get his no-hitter, but we're going to be hearing a lot from Newcomb in the years to come and the Andrelton Simmons trade -- a huge risk at the time for the Braves -- now looks a lot better as well.

After the game, it surfaced that Newcomb -- like Brewers reliever Josh Hader -- had posted some offensive tweets while in high school. "I know I've grown a lot since then," Newcomb said after the clubhouse was reopened to the media so he could talk to reporters. "I didn't mean anything by it. It was just something stupid I did a long time ago, and I didn't mean anything by it, for sure."

On what should have been a feel-good day for Newcomb, we're instead left with a sour taste and a reminder that words can be as impactful as actions. Do better, baseball players -- whether you're a teenager chasing big league dreams or a major leaguer chasing a no-hitter.

Here come the Rockies: The Rockies were just kind of hanging around most of the season, not exactly looking like a serious threat in the NL West. They're a serious threat. They completed a sweep of the previously red-hot A's with a 3-2 victory behind German Marquez. The Rockies held the A's to just four runs in the series -- at Coors Field, mind you. The Rockies are 16-5 in July and, really, their hot streak goes back to June 28 as they've gone 19-5 to climb from four games under .500 to one game behind the Dodgers.

The key has been the starting pitching, which has a 1.71 ERA at home in July over 89 2/3 innings. Of course, the starting pitching was also the key to last year's wild-card appearance, although it didn't receive the attention it deserved. As always, you have to factor in Coors Field. The rotation has a 4.74 ERA at home, but 3.88 on the road. Lefties Kyle Freeland and Tyler Anderson have sub-4.00 ERAs and Freeland's 3.13 mark means he's having one of the best seasons ever for a Rockies starter.

The Rockies have made just one minor move so far, getting reliever Seungwan Oh from the Blue Jays. It seems they're banking that Ian Desmond and Carlos Gonzalez will continue their recent hot streaks alongside MVP candidate Nolan Arenado and All-Star Trevor Story, both of whom have an OPS over 1.000 during this 24-game tear.

Is there enough here to beat out the Dodgers and Diamondbacks? I'd like to see another bat added to the lineup, but that seems unlikely at this point. The bullpen -- that high-priced bullpen -- has the second-worst ERA in the majors. The pen has to do better and back up the rotation and an offense that is starting to click. The Dodgers are still the favorites in the West, but if we're lucky we'll get a three-team race.

Catch of the day: Jackie Bradley's diving grab after a long sprint is up there as one of the better grabs of the season, especially with the Green Monster looming as potential danger:

Bradley's catch helped support Nathan Eovaldi in his Red Sox debut as he tossed seven scoreless innings in the 3-0 victory over the Twins. Eovaldi has a chance to make as big an impact as any player dealt this deadline period, as he's now allowed no runs in four of his 11 starts. There's obviously volatility as well since his season ERA is 3.80, but he's going to give the Red Sox needed depth to the rotation.

J.A. Happ also made his Yankees debut and allowed one run in six innings in a 6-3 victory over the Royals. The Red Sox are up 5.5 games. Does either team have another move in them?

Moment of the day: Congratulations to the six new Hall of Famers -- Chipper Jones, Trevor Hoffman, Vladimir Guerrero, Jim Thome, Alan Trammell and Jack Morris. The highlight of the ceremony had to be Thome listening to his daughter Lila sing the national anthem and tearing up as a proud papa.

Also, I'm with Brad Doolittle: Time to put Minnie Minoso in the Hall.