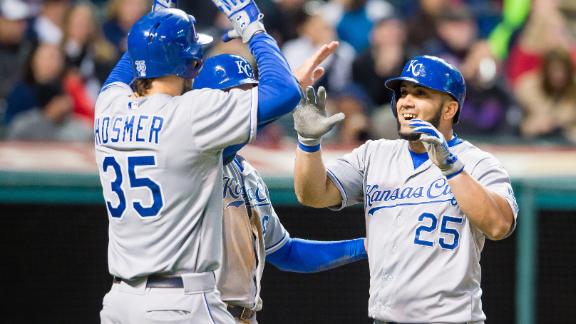 Seven players on the AL champion Royals are on track to start in the July 14 game at Cincinnati in what would be a record total for one team.

"It's really exciting," Hosmer said before the Royals opened a three-game series at Minnesota. "Just to see your name on the ballot is exciting enough. Then to realize there's only three weeks left in the voting and a lot of us are at the top of it, it's really cool and really special for a lot of us."

Fans elected seven Reds to start the 1957 game in St. Louis, but after concluding half the fan ballots came from Cincinnati, baseball commissioner Ford Frick added Willie Mays and Hank Aaron to the NL lineup in place of Reds outfielders Gus Bell and Wally Post.

Voting runs through July 2, and starters are to be announced the weekend of July 4-5.

"It's just a testament to our fans, how special our fans are, that they've really taken the time to get out and vote for these guys," Royals manager Ned Yost. "Seven guys even shocked me today a little bit. We still have a ways to go but so far it's been very encouraging for our boys."

"Obviously a lot of this is people in Kansas City and our fan base, but when you're talking about a guy like Salvi or Cain having 4 million votes, I think it goes a lot farther than just Kansas City," Hosmer said. "They're a big help. Everyone around the country is really taking notice to how we play the game and respecting how we do it."

The long-struggling Royals ended a 28-year playoff drought and advanced all the way to the World Series, where they lost to San Francisco in seven games. They started this season 7-0, were 28-14 on May 23 and also drew headlines by brawling with the Chicago White Sox and emptying the benches three straight days against the Oakland Athletics in April.

"It definitely helped and the beginning of the year we got off to a good start and also had some excitement in some other ways," Hosmer said with a smile. "That definitely drew some more viewers and that had a lot to do with what's going on with the All-Star votes.