Sparks are on the brink, but Lynx look to extend WNBA Finals 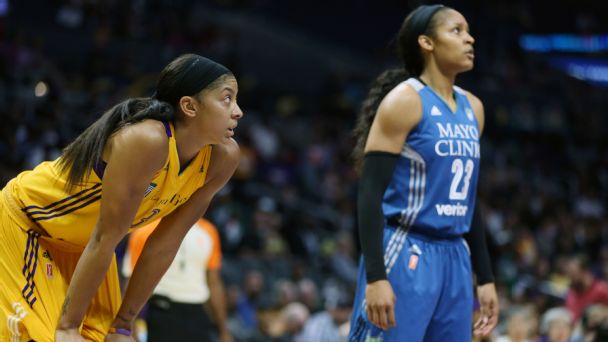 LOS ANGELES -- The Lynx have played plenty of must-win games in the WNBA Finals during their remarkable run of success over the past seven seasons.

But they are realistic in this best-of-five series. Los Angeles has been the league's best defensive team all season, and the Sparks disrupted the Lynx a lot in winning Game 3 on Friday 75-64.

Seimone Augustus was held scoreless for the first time in 53 career playoff games. Lindsay Whalen also didn't score, and Maya Moore was scoreless in the first half before she finished with 16 points.

"Some days are harder than others -- Game 3 wasn't my day," Augustus said. "But I take pride in the energy that I bring the team. I just have to find a way to try to do that [Sunday].

"I couldn't give you an explanation as to why Game 3 was so funky, but we were just a half-step slow, we were late on things. As chaotic as it probably looked is how it felt on the court. As a player who is used to structure and efficiency, it was crazy."

That said, Augustus and the Lynx seemed upbeat when they met with media on Saturday.

"We could have come in here today and had our heads down," she said. "But you can see our spirits are up. We've been in this situation before, and everybody's happy that we do have another game to play to try to push it to Game 5."

The Sparks, meanwhile, have another chance -- like last year -- to close out the series at home and become the first team to win back-to-back titles since the 2001-02 Sparks.

They will rely somewhat on the things they learned in 2016 when they lost Game 4 at Staples 85-79. Alana Beard remembered what coach Brian Agler told them in the locker room after that defeat.

"He said, 'We played to win a championship and not the game,'" Beard said. "And that's something we all can draw on. It's been big for us throughout this year in terms of just focusing on the moment and taking it one step at a time. It's easier said than done, but I think this team gets it."

Even so, the Sparks know that the Lynx are going to put up a mighty battle to stay alive.

"I honestly think we could come out and play a great game and still not win," Agler said. "That's how competitive this series is. My focus is just trying to help our team play as well as we can."

Minnesota's bench played well Friday, and the Lynx have had some success in the series going with a smaller lineup at times.

"I'm hoping we keep improving against that," Agler said. "They put a lot of shooters around Maya and Sylvia [Fowles]. And that can put a different kind of pressure on a defense."

Moore and Fowles, of course, can put pressure on all by themselves. They led the Lynx in scoring during the regular season and are doing the same in the playoffs. Moore had 27 points in Game 1, her second-highest total of the season. Foul trouble hindered her in Game 3's first half, although she recovered in the last 20 minutes.

"I have to be aggressive while being smart -- which I did for the most part in the second half," Moore said. "It's a matter of remembering throughout the game how important being in good defensive position is, and staying confident that I can do it."

Moore -- in high school, at UConn and with the Lynx -- always has been a player who has carried a ton of weight in terms of scoring and taking clutch shots. She knows a lot of eyes and expectations will be on her Sunday.

"If you want to be on the highest stage, you have to be willing to take what it requires," she said. "It's really rewarding when things are working well, but it is devastating when things don't go quite well.

"The highs can be high, and the lows can be low. But it's also a team sport, and I can't get too caught up in taking too much on my shoulders. I have to make sure I do what I do well in the context of the team."

Beard, the primary Sparks player who guards Moore, is prepared to face another challenge.

"It's a different type of focus you must have with Maya than with anyone else, because she's so capable of so many things," Beard said. "You want to do your best to keep the ball out of her hands, because once she gets it, she has multiple moves. Her shot is so quick.

"You saw it [Friday] in the third quarter: She had eight points in a row just pulling up. You can play your best defense on her, but she can still get the shot off. You can't really defend her with one person. You have to bring congestion and make her pass. She's that good."

But the Sparks also have players who are major threats offensively. In their six playoff games, Candace Parker (17.5 PPG) has led the way, followed by Chelsea Gray (16.3), Odyssey Sims (15.8) and Nneka Ogwumike (14.0).

Gray thinks that defense will be the main thing that the Sparks must focus on to try to clinch the title. The Sparks had 27 deflections in Game 3, and the impact those had on Minnesota's possessions made a big difference. And it wasn't as if the Lynx weren't ready for that kind of pressure; they have been practicing specifically for it. But the Sparks still really bothered the Lynx in that way Friday.

"That's been our No. 1 thing, and Brian has really stressed that from the beginning of the season until now," Gray said of the defense. "I'm thankful that Brian really got me prepared last year for what I'm doing this year. Just staying on me about how I have to do certain things at the right times. But I've reaped the benefits of it, and now I'm playing in another Finals."

And she has the potential to win this title in her home state of California. Gray came from Connecticut in a trade before last season and has been a pivotal piece for the Sparks at point guard. Getting Sims in a trade before this season helped them deal with the loss of guard Kristi Toliver to free agency.

And as a team, the Sparks' chemistry both this year and last has been similar to the Lynx, who've set the gold standard since their first championship season in 2011.

The Sparks were able to win the championship on the road last season, but they don't want to have to do that again. Some WNBA fans, though, might be hoping for a Lynx victory simply to extend the series another game, since the matchups between these teams have been so entertaining the past two seasons.

One thing is certain: Both will give their all in Game 4, as they have all series.

"Your season is alive as long as you fight for it," Moore said. "Both teams know each other very well. It comes down to the intangibles in the course of a game. The goal for each team is try to make the other team break. It's a matter, over the course of 40 minutes, what combination of mistakes or runs that gives a team an edge."
Report a correction or typo
Related topics:
sportsespnwnbawnba playoffsrebekkah brunsonnneka ogwumikeespnwcandace parkerwnba finalsmaya mooreminnesota lynxlos angeles sparkssylvia fowlesnews au espnwlindsay whalen
Copyright © 2022 ESPN Internet Ventures. All rights reserved.
TOP STORIES
Man accused of fatally stabbing UCLA grad student arrested
Biden, 1 year in, says nation weary from COVID but in a better place
Family seeks justice for teen found dead along freeway in South LA
Starbucks no longer requiring US workers to be vaccinated
Cardi B offers to pay for funerals of all 17 Bronx fire victims
French actor Gaspard Ulliel dies after ski accident
Vice President Kamala Harris to visit San Bernardino on Friday
Show More
'Weird Al' biopic to star Daniel Radcliffe in title role
Man sentenced to life in prison for violent crime spree in LA County
Felony charges are 1st in a fatal crash involving Autopilot
COVID test sites open in Hawthorne, San Gabriel Valley to meet demand
Northern California teen nails perfect SAT score
More TOP STORIES News