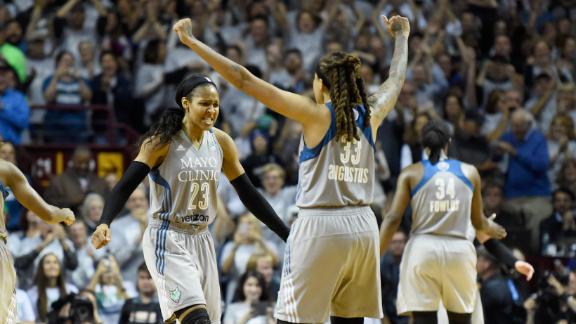 MINNEAPOLIS -- After the opener of the WNBA Finals on Sept. 24, Chelsea Gray was in a joyful Sparks locker room at Williams Arena talking about her game-winning shot. After the last game, an 85-76 loss to the Lynx on Wednesday that gave Minnesota the title, Gray spoke in a whisper befitting the somber setting.

"I love this group and the people surrounding us, all the staff," Gray said. "I'm excited for our future, but this one hurts."

Indeed, the Sparks seemed on track to repeat their 2016 championship after taking a 2-1 lead in this series. They won Game 1 on Gray's jumper 85-84 after Minnesota had fought back from a 26-point deficit.

Last year, they had the chance to close out the title in Game 4 at Staples Center and couldn't do it, then won Game 5 in Minnesota. They didn't want to make a return trip to Minneapolis this year, but they were beaten in Game 4 once again 80-69.

Rebounding hurt the Sparks in Game 4; they lost the board battle by 20. It was almost as bad in Game 5, in which they were outrebounded by 17.

"There's no X's and O's you can really talk about when it comes to rebounding," Sparks forward Nneka Ogwumike said. "You either want it or you don't. You've got to put yourself in position to rebound."

You also have to be in the game, which Ogwumike wasn't for the last 5 minutes because she fouled out.

"Yeah, that was tough for me, but I have faith in my teammates," said Ogwumike, who finished with 11 points and three rebounds. "I try not to put myself in those positions."

It was Ogwumike's first disqualification in two years -- the last one was also in a season-ender against the Lynx, in Game 3 of the 2015 Western Conference finals.

"Obviously, it hurt not having her in the game," said teammate Candace Parker, who finished with 19 points, 15 rebounds and five assists. "But our start wasn't as up to par as we wanted it to be."

As has been the case in all but one game between these two teams over the last two seasons, the winner of the first quarter won the game. The exception was Game 5 last year, and there also was one game in which they were tied after one quarter.

Essentially, the story of this entire series was about who took control early, because the team that did won each game.

Guard Alana Beard felt the Sparks lacked a sense of urgency in the losses in Games 2 and 4, but she didn't think that was the problem on Wednesday.

"We just didn't rebound as a team, and that hurt us, but they were the better team tonight for sure," Beard said. "But I'm extremely grateful for this. I've been very fortunate to be in [the WNBA Finals] two times. I don't take it for granted.

That comment would indicate that Beard, who at 35 is the oldest of the Sparks, is leaning toward returning next season. She started throughout this season and was the WNBA defensive player of the year. But she said that she will wait and see how she feels heading into next season before deciding whether to keep playing in the WNBA. She isn't going to play overseas this winter and instead will focus on her business ventures, which include ownership of a restaurant.

"I'll take time to think about it; it's not something I've really thought about," Beard said of the 2018 season. "I've really trained myself to stay in the moment. I'll play it by ear, and [general manager Penny Toler] and I have a really good relationship and stay in contact. She'll know the way I'm thinking at all times."

Even with Beard, the Sparks were a younger group than the Lynx this year, which is something to consider for the future. Minnesota's starters for this series were age 35 (Rebekkah Brunson, Lindsay Whalen), 33 (Seimone Augustus), 31 (Sylvia Fowles, who'll be 32 on Friday) and 28 (Maya Moore).

"Playing in two five-game Finals -- that's experience you can't get any other way," Ogwumike said. "We have to keep that in mind."

Trades brought Gray to the Sparks in 2016, and Sims in 2017; they combined for 29 points, 11 assists and five steals in Wednesday's loss. Both should be key factors as the Sparks look to 2018. The Sparks went a dreadful 2-of-18 from 3-point range on Wednesday, so more effective and consistent perimeter shooting are qualities both of them can bring.

Ultimately, it was another very close series, and this one just didn't go the Sparks' way.

"Glad everybody enjoyed the series; it was exciting," Parker said. "That's all I've got."