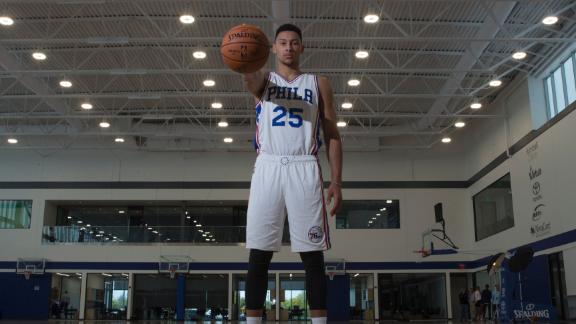 In a survey of 39 rookies conducted by NBA.com, Smith was voted most likely to win Rookie of the Year.

Smith impressed scouts -- and his fellow rookies, apparently -- with standout athleticism and explosiveness in the Las Vegas Summer League, where he averaged 17.8 points per game. He figures to play significant minutes in his first NBA season.

It's worth noting that this poll doesn't have a strong history of predicting the eventual award winner. The players surveyed have correctly predicted the Rookie of the Year just once since 2007;Kevin Durant won the award that season. Last season, then-Minnesota Timberwolves guard Kris Dunn(now with theChicago Bulls) was predicted to win the award, which went to the Milwaukee Bucks'Malcolm Brogdon.

Rookies were also asked to name their favorite player. Somewhat surprisingly, two-time MVP Stephen Curry didn't receive a vote. The voting total for Durant, Curry's Golden State Warriors teammate, decreased significantly from past surveys. Durant had been the rookies' favorite player for the past three years, according to the survey.

This season it was LeBron James, followed by Russell Westbrook and Kawhi Leonard. This is only the second time in eight years that James was named the rookies' favorite player; 2012 is the other.

In other voting categories, Utah's Donovan Mitchell was voted as the "biggest steal" in the draft based on where he was selected. Mitchell, who was picked 13th by the Jazz, also played well in summer league, scoring 24 points per game.

Phoenix's Josh Jackson was voted as the top defender in the rookie class. The Kansas standout received 26.3 percent of the vote, followed by Golden State's Jordan Bell (23.7 percent) and Mitchell (21.1 percent).

Lastly, Ball and Boston's Jayson Tatum were tied in the voting for the rookie most likely to have the best overall career. Jackson and Smith tied for third in the category.