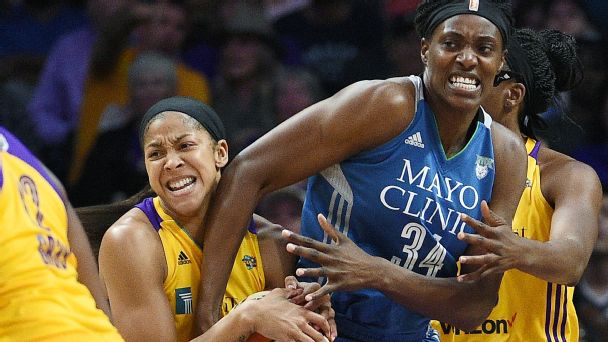 MINNEAPOLIS -- This is why Sylvia Fowles wanted to come to Minnesota.

On Wednesday (ESPN, 8 p.m. ET), the Lynx and Sparks meet for the WNBA title, and who wouldn't want to be on that kind of stage?

"This is what you live for and play for," Fowles said. "We play year-round to get to this point. I wouldn't want to be anywhere else but here."

The "getting here" process was a big part of Fowles' desire to play for Minnesota, too. She knew she could improve, even as an experienced veteran, with a franchise such as this. It wasn't just, "Oh, let me go join a group that's already won a couple of titles and ride the wave." It was, "Let me go see if I can raise my level of play to help make them better."

She has done both. Fowles, the No. 2 draft pick by Chicago in 2008, was very good with the Sky, going to the 2014 WNBA Finals and winning two Olympic gold medals while with that organization.

But she knew she could become an even more impactful player. The mindset at Minnesota has pushed her the way she wanted to be pushed. She was league MVP this season for the first time, and if the Lynx defeat the Sparks, Fowles might become the first player since Lauren Jackson in 2010 to win WNBA Finals MVP the same season she won league MVP.

"She's been unbelievable," Lynx point guard Lindsay Whalen said. "She's come in and set the tone all season for us with her ability to be such a dominant low-post presence."

Coach Cheryl Reeve said, "We're not here without Syl. It's made everyone's life easier. It's been difficult for her: She's getting double-teamed and triple-teamed, getting fouled, and she just keeps trucking along."

In Sunday's Game 4, which the Lynx won 80-69 to tie the series 2-2, Fowles had team highs in points (22) and rebounds (14). She was poked in her right eye late in the game, inadvertently by the Sparks' Nneka Ogwumike, and Fowles acknowledged that her vision was a bit blurry the rest of the contest. But she said her sight cleared up soon after the game.

"I knew the game was on the line," said Fowles, whose eye was still a bit red Tuesday. "It's fine now. Whatever happens, you kind of have to suck it up. Our backs were against the wall, and we needed to win. You just have to get it done, and I think we all stepped up to the challenge."

Last year, the Sparks' Nneka Ogwumike won the season MVP and teammate Candace Parker was MVP of the WNBA Finals. Depending what happens Wednesday, one of them might win the Finals award this year, too.

Parker is leading the Sparks in scoring in the postseason (16.6 PPG) and is averaging 8.3 rebounds. Ogwumike is leading in rebounding (9.6 RPG) and averaging 14.4 points.

Fowles sat out the first part of the 2015 season to force the trade to Minnesota, and some Chicago fans -- and WNBA fans in general -- were upset with her for that. Consider, though, that Fowles had spent seven years with the Sky, and as a core player in 2015 didn't have a way out except via trade. The Lynx wanted her, and she wanted to be with the Lynx.

But when Fowles arrived in late July, both she and Reeve cautioned against the idea that Minnesota had the next several titles wrapped up. They knew how good the rest of the league is.

The Lynx went on to win the title that year, but it wasn't easy, as Indiana stretched them to five games. By that point, the Fever were worn out, in part from defending against Fowles. She had a subpar Game 4 in 2015 but made up for it with 20 points and 11 rebounds in Game 5.

Last year in the WNBA Finals, Fowles had 10 points and nine rebounds in Game 5. She blocked Ogwumike's shot near the end, but it went right back to the shooter. Ogwumike hit her second attempt, and that won the title for the Sparks.

That sequence has stayed with Fowles. Not to an extreme degree; that isn't her personality. But, as was the case for the rest of the Lynx, coming that close and falling short bothered Fowles a lot.

Now she has another chance at a championship. She and the Lynx will play in their third Game 5 in the past three seasons.