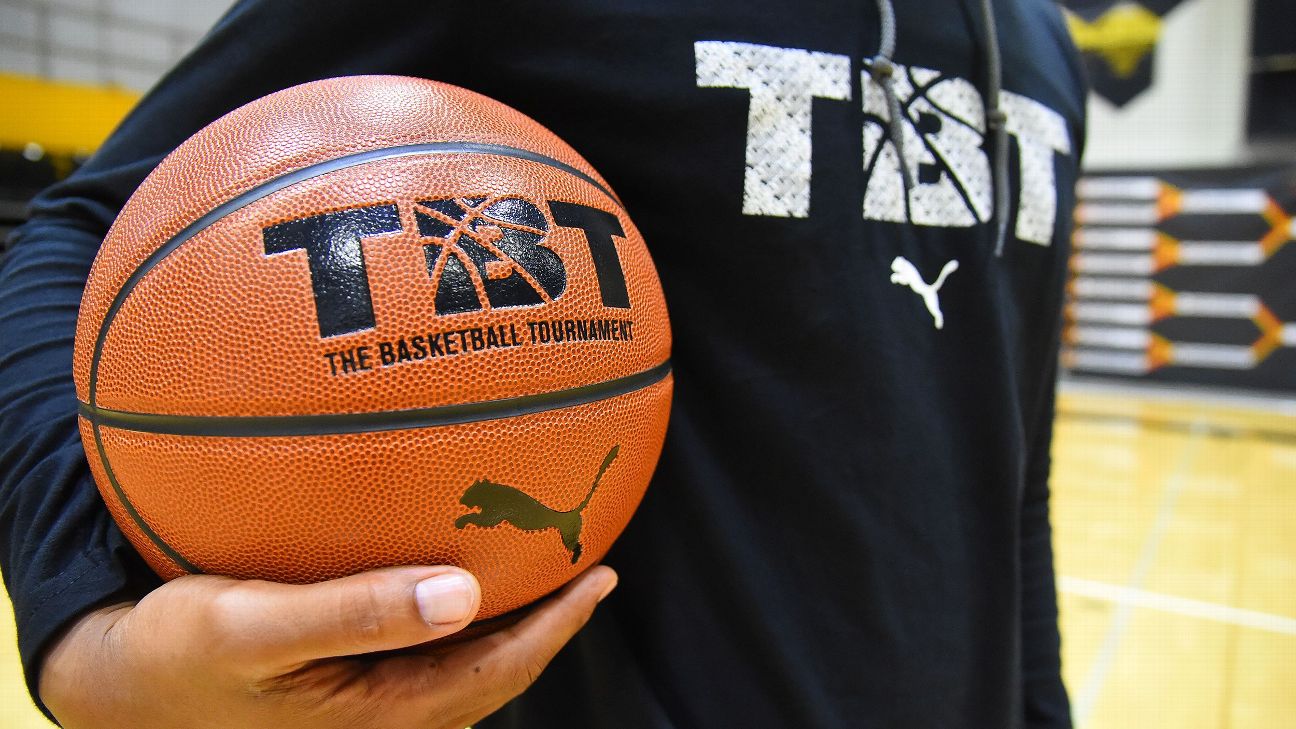 The 2019 edition of The Basketball Tournament (TBT) tipped off on July 19, and the quarterfinal bracket is taking shape. Check below to see who's advanced to the round of 8, as well as the schedule of teams vying to join them this weekend.

Which squads have the best chance at the $2 million prize?

For the complete TBT bracket, click here. For an explanation of how the "Elam Ending" works, click here.

I made the mistake last year of picking against what is now the four-time champion, and I won't do it again. Although Errick McCollum will be missing (he is getting married), this team has plenty of firepower to win the TBT one more time. Former St. John's star D.J. Kennedy is the LeBron James of the TBT, and McCollum will be replaced by former NBA point guard Bobby Brown (Cal State Fullerton). There's also a rumor that Kyle Fogg (Arizona) will return, when many thought he would miss the summer's tournament. Stay tuned.

Six former NBA players make upBoogie Cousins' team -- and he is all-in on the TBT. Speaking to their general manager, Cousins had a draft board and actually recruited players off other teams. They're led by Pierre Jackson (Baylor), who can run the show and score. Willie Reed (Saint Louis) gives them a frontcourt player to complement Quincy Miller (Baylor), and Markel Brown (Oklahoma State) might be the best on-ball defender in the TBT. Darius Johnson-Odom (Marquette) might be the best slasher. Add in Keifer Sykes (Wisconsin-Green Bay) and you have a final four team.

Are we talking about the four-time defending champs? Until further notice, they are the favorites every year. D.J. Kennedy told me they don't even practice; they just have a great natural chemistry, pieces that fit and no ego. Beat 'em, then we will talk!

Every tournament has a Cinderella! These guys from Queens University in Charlotte and Lincoln Memorial University (Tennessee) had enormous success at their respective programs. They might be former Division II basketball players on paper, but trust me, both schools evaluate and recruit Division I prospects and there is talent here. A lot has to break in the right direction, but don't sleep on D2 .

This team has been an inspirational story in the TBT, because it plays in honor of Pete Frates, the former Boston College baseball standout who is battling ALS. Led by former Eagles star Sean Marshall and NBA first-round pick Austin Daye (Gonzaga), this team has talent up and down the roster. Dee Bost (Mississippi State) and MarQuez Haynes (Boston College and UT Arlington) are proven European stars and will anchor the backcourt.

Taylor Braun (North Dakota State) just gets every 50-50 ball. He might be the toughest dude in the TBT. Kenny Kadji (University of Miami) plays inside and out. James Michael McAdoo (North Carolina) has an NBA championship ring, Jerome Randle (Cal) is the most dynamic little guard in the tournament and Donald Sloan (Texas A&M) brings toughness to a very talented Eberlein team.

I like Big Xif they have Jae'Sean Tate (Ohio State) and Paris Lee (Illinois State), though I'm not certain about the status of either. Tate's aggressiveness going to the rim will be a matchup nightmare, supplemented by Lee's NBA-type perimeter game. Also, Big X will have the best coach in the event, as former Michigan and Ohio State guard Andrew Dakich makes his head-coaching debut.

It's the perfect blend of defense and offense. Two-time Big Ten defensive player of the year Aaron Craft handles the defensive responsibilities, and adding former Buckeyes bucket-getter Deshaun Thomas will make a huge difference when the game gets tight.

On paper, this is the most talented team in the TBT. Like Overseas Elite, many of these guys either played in the NBA or at the highest level of European basketball. The team is named for former UNC Greensboro star Kyle Hines, one of the top players in Euroleague. Former Florida Gator Nick Calathes, who played for Rick Pitino this past season year in Greece, could easily make many NBA rosters right now.

Armored Athlete and Team Hines are the two most talented teams in the TBT, in my opinion. Armored Athlete has young legs, experience and size. Xavier Rathan-Mayes (Florida State) can get a shot anytime. JP Tokoto (North Carolina), Terrico White (Ole Miss) and Murphy Holloway (Ole Miss) have the length and athleticism. Keith Hornsby (LSU) is their designated sniper from deep, and oh by the way, Michael Ojo (Florida State) is a mountain masquerading as a man.

My wife is the former Syracuse softball coach, and she loves Jim Boeheim! Last year in Atlanta, I was stunned to see the way Cuse fans packed the house. No way Boeheim's Army loses in Syracuse, and their performance there will propel them all the way to Chicago and on to the final four.

Any team Chris Paul coaches has a chance. The strong inside-outside tandem of ex-UNC stars Kennedy Meeks and P.J. Hairston could advance to the "final four." Meeks won a national championship with the Tar Heels. Dez Wells (Maryland and Xavier) is the X-factor for this CP3 team, as he presents a matchup problem for opponents.

Fran Fraschilla: Self Made (Kansas alumni), No. 3 seed (Wichita Region)

These former Kansas Jayhawks stars are making their first appearance in the TBT. If they are to get to the "final four," they will have to first win in always tough Koch Arena, home of Wichita State's alumni team, the AfterShocks. Wichita native Perry Ellis leads the way for Self Made. This site is likely to be the most raucous of all eight regionals, as ticket sales have been very brisk.

Seth Greenberg: Self Made (Kansas alumni), No. 3 seed (Wichita Region)

Perry Ellis ... is he still in school? I guess he isn't, but he's the adult in the room. Tyshawn Taylor and Elijah Johnson are a dynamic backcourt without a doubt, and Travis Releford gives them a big wing who can score. I like the combination of Kevin Young and Landen Lucas, who do all the little things as they did when they were Jayhawks. Darrell Arthur gives them a beast in the frontcourt.

The Golden Eagles are led by the grand old man of the TBT, Travis Diener. All Diener does is make game winners. Shot-maker Andrew Rowsey joins a team with the most alumni esprit de corps this side of Boeheim's Army.