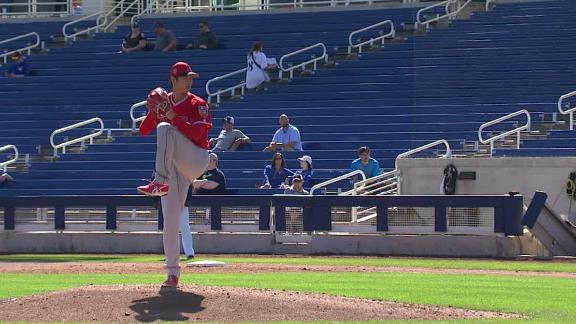 TEMPE, Ariz. -- On a bright and sun-splashed day at the Los Angeles Angels' camp, the best player of his generation is free to hide in plain sight.

During a recent morning at Tempe Diablo Stadium, six-time All-Star and two-time MVP Mike Trout bounded up the steps from the clubhouse, hung a left and took part in early stretching with his fellow position players about 50 feet from three dozen media members who were oblivious to his existence.

The still and video cameras were all trained on Shohei Ohtani as he engaged in some idle chatter near the right-field line with his personal interpreter. Ippei Mizuhara roams the grounds while toting a black backpack that had taken on a sort of mystical quality, like the briefcase in "Pulp Fiction." No one knew precisely what it contained until Mizuhara came clean with some good-natured prompting from Grace McNamee, the Angels' Japanese media liaison.

The backpack carries baseball gloves -- because you never know when an impromptu game of long-toss with baseball's new international sensation might break out.

On Valentine's Day, Ohtani rolled into Tempe with his boundless talent, effortless charisma and an ambitious agenda. He's going to pitch in a six-man rotation for the Angels and moonlight as a designated hitter when manager Mike Scioscia sees fit. He was already ticketed for the same scrutiny as Ichiro Suzuki, Hideki Matsui and Yu Darvish when they came stateside, and the dual nature of his endeavor adds an entirely new level of intrigue.

"He's trying to pitch and hit. That's pretty unique in its own right," said Angels second baseman Ian Kinsler, who played with Darvish in Texas. "Other than that, it's just a pretty normal Japanese superstar coming over to America to play baseball."

From the moment Ohtani unpacked his duffel bag in the home clubhouse, the acclimation process has been dotted with small signposts. He took his first round of batting practice on a back field in the rain, then elicited gasps and high-fives from teammates a few days later by sending balls to the nether regions of Tempe Diablo Stadium.

Ohtani the pitcher struggled with fastball command while recording only four outs on 31 pitches in his Cactus League debut Saturday against the Milwaukee Brewers. After the game, a Japanese TV crew corralled American reporters, handed them large sheets of construction paper and a marker, and asked them to rate the performance on a scale of zero to 100.

Ohtani singled and walked twice in his DH debut against San Diego two days later and followed up with an 0-for-3 vs. Colorado. Writers dutifully mentioned that he slid into second base without incident on a fielder's choice, and his equipment choices were rife for dissection. Why was he wearing both an elbow pad and a shin guard? (He has done it since high school, he explained.) Why did he don a protective glove similar to the one used by Trout while running the bases? (Because the Angels suggested it.)

Ohtani is extremely guarded in his group media sessions, so Scioscia is entrusted with the bulk of the heavy lifting in his dual briefings with the U.S. and Japanese media each morning. On a given day, Scioscia might discuss Zack Cozart's transition from shortstop to third base or the flexibility of his new-look lineup, then spend six to eight minutes on Ohtani-related minutiae.

"For me it's an extra 10 minutes a day, and our players haven't missed a beat," Scioscia said. "No distractions. Guys are getting their work in, so it hasn't changed that much, to be honest with you."

Scioscia gamely soldiers on, but he'll occasionally sneak a peek toward the infield, with the wistful look of a man who would rather be working with the catchers on ball-blocking drills.

Scouts who followed Ohtani during his tenure with the Hokkaido Nippon-Ham Fighters talk about his transition to a slightly bigger baseball, the challenge of longer road trips across time zones and the other small adjustments he'll encounter in Anaheim. In Japan, batting practice pitchers stand on the mound and throw at a deliberate pace. The first time Ohtani stepped in the box at Angels camp, a coach stood 45 feet away and pumped in offerings at a rapid-fire pace. When Ohtani was pitching for the Fighters, the rules allowed him to leave the dugout with two outs while his team was at bat and begin limbering up in anticipation of his next inning. He won't have that luxury in the U.S.

It's too soon to form definitive judgments, but the early take that Ohtani has a higher ceiling as a pitcher than a hitter seems to be holding true to form. His velocity doesn't quite play up to his radar gun readings of 93-97 mph because his fastball is a little flat. But he has a healthy assortment of secondary pitches, a feel for the craft and plenty of athleticism.

"He's going to be a No. 1 starter for sure," a National League scout said. "For me, I would just leave him as a starting pitcher. But the Angels had to tell him what he wanted to hear to get him, I'm sure.

"I figure he might win 12-15 games this year. I don't see him blazing through this league right away. His fastball is pretty straight, and if you throw straight fastballs, these guys over here can hit anything. He's probably going to wind up pitching like Darvish, with a lot of breaking balls. As time goes along, I think he'll make the adjustments he needs to make."

Even the scouts who rave about Ohtani's work ethic and ability have concerns about the magnitude of his undertaking. He has a long swing that will require some maintenance, and his schedule could complicate his efforts to stay sharp as a hitter. If he's pitching on a Monday, he'll take the next day off, serve as the Angels' DH on Wednesday and Thursday, throw a bullpen side session Friday, take another day off, then pitch again on Sunday. The Angels will continue to tinker with the routine as camp progresses.

"He knows what he's doing at the plate and he might be able to beat up on Nos. 3, 4 and 5 starters," the scout said. But if Ohtani is locked into a schedule, it's a coin flip which starter he'll be facing when he's in the lineup.

"He's the best two-way player I've ever seen, and he's smart and competitive," an American League talent evaluator said. "It's not a reach that he can do both. But the time and length of the season will be the real challenge. It's a lot to ask for someone to meet that challenge."

Ohtani approaches his quest with discipline and tunnel vision. In his homeland of Japan, he either lived with his parents or in a dorm with the other players on the Fighters' roster. He comes across as modest, somewhat shy and deferential to his established teammates even as he pursues a course none of them has ever contemplated.

His fellow Angels reached out early in camp and invited him on a golf outing and played pickup hoops with him. They found he's easily approachable and thoroughly invested in the team.

"He's cool," reliever Blake Parker said. "He's a laid-back, humble guy, and that makes it easier. This can be overwhelming at times when you're 'the guy' and it's all eyes on you. But he's handling it well. He doesn't want to be 'Shohei Ohtani, the Japanese Babe Ruth.' He just wants to be a regular guy who's part of the team and is treated like everybody else."

Best of luck with that. As an international superstar trying to do something historic, Ohtani is anything but regular. And no matter how trivial the day's activities might be, he can rest assured someone will be watching.