The highs and lows of Yasiel Puig's time in L.A. 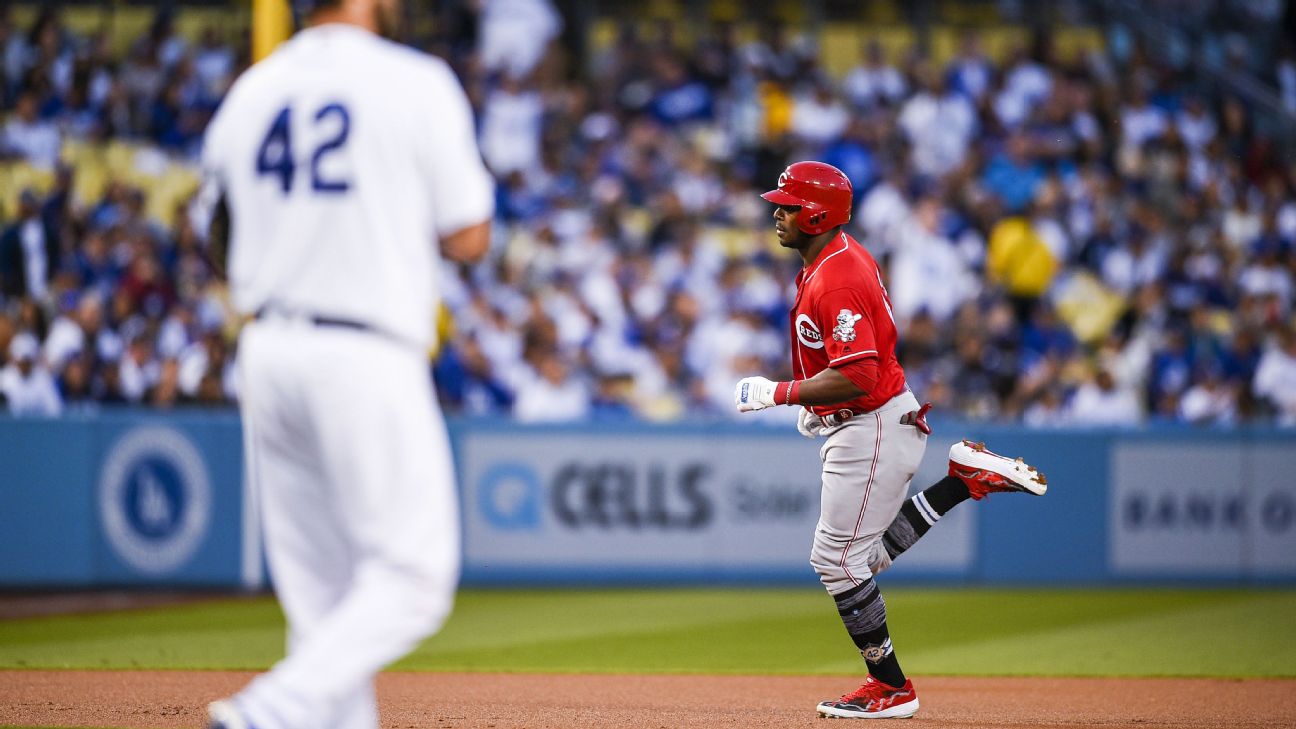 LOS ANGELES -- He showed up late, then homered early.

Yasiel Puig spent more than half a decade tantalizing the Los Angeles Dodgers with his talent and tormenting them with his indiscretions. It was only right that he'd do the same to his new team upon returning to his old place.

Puig arrived 70 minutes late to his scheduled news conference on Monday afternoon, shortly after Dave Roberts and a group of Dodgers executives distributed National League championship rings to the former players who now reside on the other side.

When he finally sat behind a microphone, Puig professed his love for the Dodgers' fans and spoke glowingly about the camaraderie that exists within the Cincinnati Reds' clubhouse, a not-so-subtle nod to the dynamic he felt was lacking on his former team. The fourth pitch he saw in Monday night's game -- from Clayton Kershaw, the type of lefty who would have confined Puig to the bench during his time with the Dodgers -- sailed over the center-field fence for only his second home run in 13 games this season. The crowd saluted him as he circled the bases.

"I miss the fans and seeing the stadium full and chanting my name all of the time when I go to bat or make a good throw," Puig said after Monday's 4-3 walk-off loss to the Dodgers. "My last year, in the World Series, I hit a home run, people were chanting my name, and that made me excited and made me play the best I can every day when I go out. That's what I was feeling today."

Puig's six-year stint in L.A. was complicated. The fans adored him, but members of his organization at times abhorred him. He was dynamic yet reckless, a generational talent in need of perpetual guidance.

Below are the moments that defined Puig's tumultuous time in L.A.

Welcome to the world

The baseball community will never forget its introduction to Puig -- late into the night on June 3, 2013, on a Kyle Blanks fly ball that sailed toward the right-field warning track with one out in the top of the ninth. Puig ranged back, took a couple of steps to his left, secured the catch, brought his momentum toward the infield and fired a laser to first base, nailing Chris Denorfia and -- to the bewilderment of Roberts, at that point the San Diego Padres' first-base coach -- preserving a one-run lead with a game-ending double play.

That throw marked the beginning of what became an extraordinary first month for the Cuban outfielder with the jarring defection story.

Puig became the second player in the modern era to homer four times in his first five games. He recorded 27 hits in his first 15 games, 34 through his first 20 and 44 through his first month. Vin Scully deemed him "The Wild Horse," and the rest of the league compared him to Mike Trout. By the end of the year, Puig had secured a .319/.391/.534 slash line. He spent the first two months in the minor leagues and still finished 15th in MVP voting.

Too fast, too slow

On a Saturday morning near the end of the 2013 calendar year, Puig's white Mercedes was clocked going 110 mph in a 70 mph zone, which led to his second reckless-driving charge in eight months. Charges eventually were dropped, but the Dodgers were alarmed nonetheless.

Less than two months later, he arrived at spring training 26 pounds overweight. Then he showed up late for the home opener, prompting him to be scratched from the lineup and pressing Matt Kemp into action. In Puig's place, Kemp made a first-inning error and let a second-inning fly ball carom off his glove. The Dodgers lost 8-4.

It all began with a subtle bat flip, executed after Puig homered off Madison Bumgarner in May 2014. Bumgarner made sure to position himself near the third-base line as Puig came around and expressed his dissatisfaction with the Dodgers right fielder. Four months later, Puig was hit in the ankle by a two-strike Bumgarner pitch, and the two got into a heated argument once again.

Then, in September 2016, came the tapper, conveniently up the first-base line, and another stare-down, ignited by Bumgarner. "Don't look at me," Bumgarner said repeatedly as he walked toward his dugout, inspiring the infamous T-shirt that was signed by the Dodgers and sent to the Giants. Puig's last benches-clearing incident with the Giants occurred last fall and involved catcher Nick Hundley, who appeared to get upset at the way Puig grabbed his bat after a foul ball.

The ritual began in the clubhouse, as is often the case, when former Dodgers hitting coach Turner Ward found Puig in a foul mood during the summer of 2017. "Come here," Turner said, "I want to tell you something." Puig leaned over and Ward planted an unsuspecting kiss on his cheek. Days later at Citi Field, after Puig hit his 20th home run, he came up from behind Ward, wrapped an arm around his neck and returned the favor.

It became a thing, painting Ward -- now Puig's coach, once again, with the Reds -- as one of the few within the organization who was able to build a real, substantive relationship with Puig. The most memorable kisses occurred in the middle of September last season, when Puig homered five times over the course of 24 hours. Ward was so happy, he nearly kissed Puig on the lips.

By the end of July in 2016, Roberts' first season as manager, the Dodgers had grown tired of Puig. After failing to trade him before the non-waiver trade deadline, they sent him to the minor leagues. Farhan Zaidi, at that point the general manager, framed it as his "chance to work on some things and develop further as a player." His OPS had sunk to .706, but Puig also continued to arrive late for meetings and remained inconsistent with his work habits.

A week later, Puig posted a series of videos on his personal Snapchat account of him carousing on a party bus with his new teammates in Triple-A. The activities seemed harmless in nature, but they were a bad look for a player from whom the Dodgers wanted to see more accountability.

Every boisterous celebration -- the ones that ignited fans and enraged opponents -- spilled out after a decisive home run in Game 7 of the 2018 National League Championship Series -- the one that sent the Dodgers back to the Fall Classic, delivering on a guarantee that Puig made at the start of October.

He flipped his bat. He slammed his arms toward his crotch. He raised his hands and wagged his fingers, arousing an angry Miller Park crowd. He pounded his chest. He pretended to slit his throat. And then, of course, he wagged his tongue.

Seven days later, in Game 4 of the World Series, Puig hit a majestic home run off Boston's Eduardo Rodriguez. The image from that blast -- of Puig's arms raised while Rodriguez slammed his glove -- could have been the iconic snapshot of Puig's time in L.A. But the Dodgers blew a 4-0 lead, then got eliminated the following night. 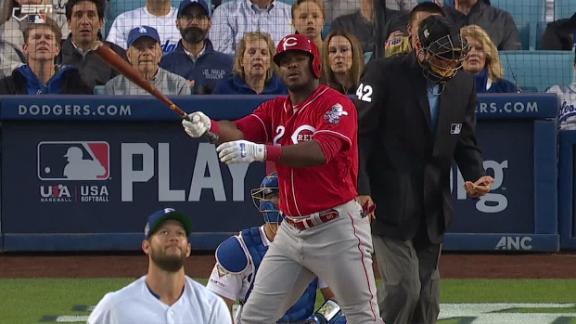