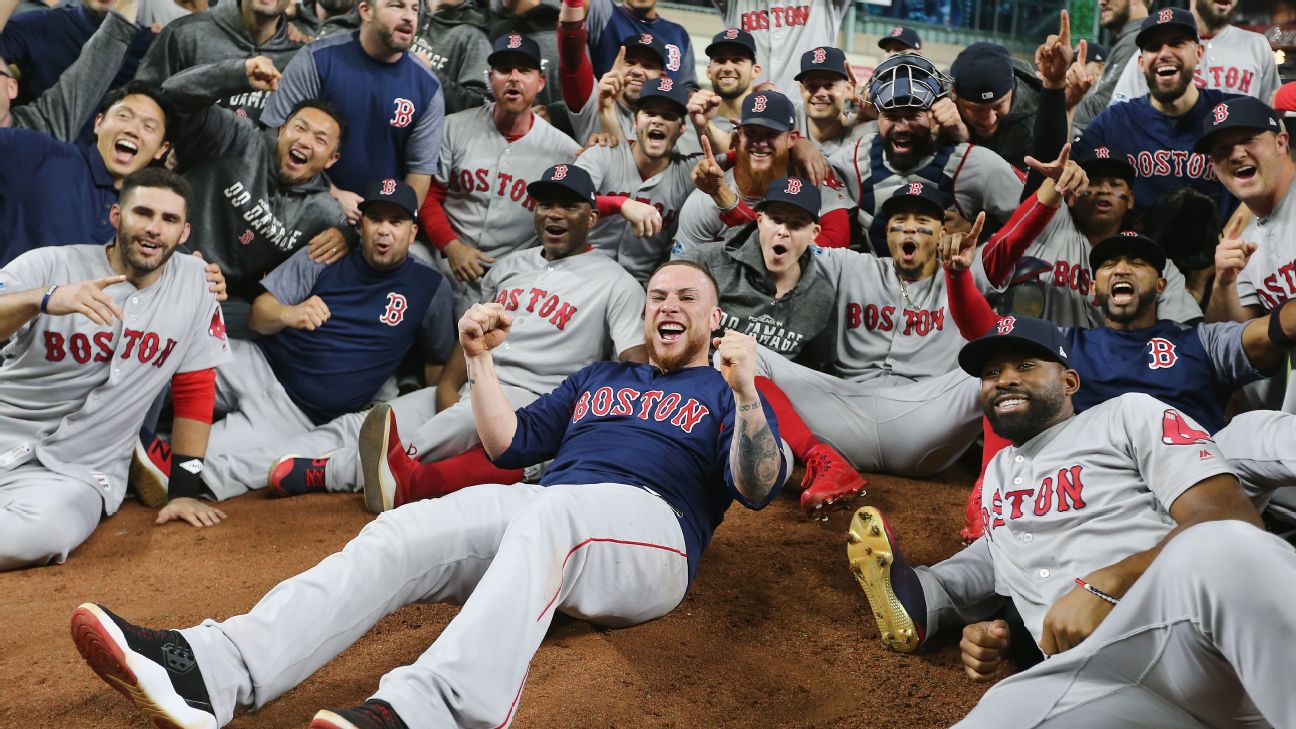 The Dodgers have been playing baseball since 1884, the Red Sox since 1901, and this marks just the second time they have played each other in a postseason series and the first time in 102 years -- when the former was known as the Brooklyn Robins and Babe Ruth pitched all 14 innings to win Game 2 of the Fall Classic for the latter. With that as a wonderful starting point, this could be one of the greatest World Series in recent years.

The Dodgers, who lost in Game 7 of the World Series last season, are trying to win it for the first time since 1988. The Red Sox -- who dethroned the Astros, the team that beat the Dodgers last year -- won a franchise-record 108 games this season. The Dodgers hit more home runs than any club in franchise history. Red Sox manager Alex Cora, a former Dodger, is attempting to become the fifth rookie skipper to win the World Series. Dave Roberts, who has a special place in Red Sox history with his famous stolen base in the 2004 American League Championship Series, is the manager of the Dodgers. Cora and Roberts were teammates with the Dodgers for three seasons. Two of the three oldest ballparks in baseball will serve as hosts. A matchup of two of the decade's best left-handers -- Clayton Kershaw and Chris Sale -- is possible not just once but twice.

Anything is possible here.

1. Offense.The Red Sox knocked around a great Astros pitching staff for 29 runs in five games; Houston had not allowed seven runs in three consecutive games this year until the ALCS. Maybe it should not have come as a surprise given the Red Sox led the major leagues in virtually every important offensive category this season.

The surprise is that Mookie Betts and J.D. Martinez did not carry the Red Sox in the dismantling of the Astros. It was more Jackie Bradley Jr., who won the LCS MVP by driving in nine runs, all with two outs, one short of Yogi Berra's record (in 1956) for most two-out RBIs in a postseason series. That has been the secret of the 2018 Red Sox offense: Nos. 1 through 9, it doesn't always look intimidating, it includes its fair share of soft spots, yet it always seems to produce.

The Red Sox are especially good at home, where they went 57-24 this season, the best record in the major leagues. They averaged 5.8 runs per game at Fenway Park, and allowed 4.0 runs, the second-largest disparity by any team in the past 15 years. Fenway can be especially dangerous for left-handed pitchers, and the Dodgers likely will start three left-handed pitchers.

2. Outfield defense. The Red Sox have the best defensive outfield in the game. They start three center fielders: Andrew Benintendi in left, Bradley in center and Betts in right. Bradley might win a Gold Glove this season. In Game 4 of the ALCS, Betts, the best defensive right fielder in the game, turned a home run by Jose Altuve into an interference call by leaping above the right field fence to make an attempted catch. Benintendi saved that game with a diving catch with two out and the bases loaded in the bottom of the ninth inning. With all the strikeouts in the game today, defense has been de-emphasized on certain days because fewer balls are put in play, but no team can win with a lousy outfield defense, and a great outfield defense such as Boston's can mean the difference in not just one game, but a seven-game series.

3. Chemistry.It is corny, it is clichéd, it is difficult to quantify, but in the case of the Red Sox, the togetherness they show is real. It began in spring training, during which Boston closer Craig Kimbrel had to leave the team to be with his 3-month-old daughter, who needed heart surgery. When he returned, the team embraced him; the players and coaches stood in the middle of the clubhouse, held hands and prayed. "I have never seen that before in my career," Martinez said.

At the end of spring training, pitcher Eduardo Rodriguez took the whole team out to dinner. "Everyone showed up," Cora said. "Of all the teams I've been on, I've never seen that." In mid-August in Philadelphia, Rodriguez pitched a simulated game at 2 p.m. before a 7 p.m. game. Betts, who wasn't in the lineup that night, was there to watch the simulated game. David Price, the highest-paid player on the team, was there, standing behind the mound, acting as the umpire, and support-giver.

"I've never seen anything like that," Cora said. "This team is different."

One reason I will be completely wrong

The Dodgers did not play particularly well in the National League Championship Series against the Brewers -- they looked terrible in their three losses -- but still won in seven games. That's what great talent can do: rise when it has to. And the Dodgers are so talented. They hit the most homers in the NL this year. There are great arms in their rotation, including Kershaw, who throws lots of curveballs and sliders these days, and Walker Buehler, who mostly throws gas. Their bullpen was surprisingly good in the postseason, led by closer Kenley Jansen. They have a deep, versatile bench, one that would allow them to match up with anything the Red Sox have to throw their way. They have a lot to play for, avenging a loss in the 2017 World Series.