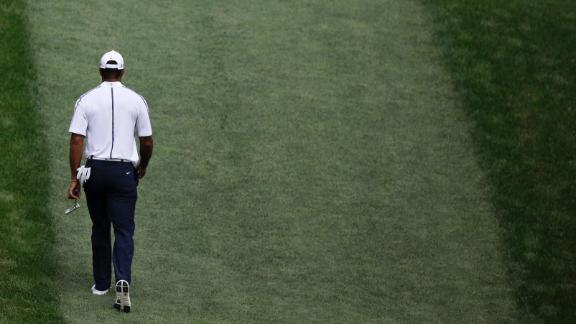 LOUISVILLE, Ky. -- A recurrence of the back issue that forced him out of last weekend's WGC-Bridgestone Invitational struck Tiger Woods on the driving range Friday at the PGA Championship -- with a predictable result.

Woods tried to play through it but could manage only a 3-over-par 74 at Valhalla Golf Club, missing the 36-hole cut for just the fourth time in a major championship as a pro and just the 12th time worldwide overall.

Playing in obvious back pain, Woods was 15 strokes behind leader Rory McIlroy. He played the front nine in 4-over 39, double-bogeying No. 6. Wayward tee shots on that hole, No. 7 and No. 10 all went into the crowd.

"It was sore. No doubt about it," Woods said after totaling a 6-over 148 to miss the cut by five strokes. "It went out on me on the range. Just had to play through it."

Whether that was a good idea undoubtedly will be debated until he plays again -- which is unclear because his 2013-14 PGA Tour season is over, with Woods having played just seven tournaments. He won't be eligible for the FedEx Cup playoffs that begin in two weeks.

Woods struggled from the outset, and appeared especially distressed on the front nine as he played a four-hole stretch in 4 over. At times, he had difficulty picking up his tee, crouching over to read putts, even standing over them.

There appeared to be a chance he might withdraw after nine holes, given that his courtesy car was a short distance from the ninth green. But Woods headed to the 10th tee and actually settled down over the closing nine, making two birdies, a bogey and six pars.

Asked if his body was telling him not to play, Woods interrupted and said, "It was telling me on the range (it) probably wasn't a good idea, but I'm not exactly a non-stubborn person."

"Stubbornness," LaCava said when asked why Woods continued. "I asked him if he could make it worse and he said he didn't think so. When he said that, I was fine with it. I didn't fear something worse was going to happen."

Woods has suffered with back issues most of the year, and they became acute in the spring when he had to withdraw from the Honda Classic during the final round. He tried to play a week later, managed to shoot a third-round 66, then hobbled during a final-round 78 at Doral, where his 25th-place finished turned out to be his best of the year.

But three weeks later, on March 31, he had a surgical procedure known as a microdiscectomy to alleviate a pinched nerve in his back. He missed the Masters and the U.S. Open. He missed the cut at the Quicken Loans National in June, finished 69th at the Open Championship and then withdrew with nine holes to play Sunday at the WGC-Bridgestone.

Woods said the injury, which is different from the one that required surgery, was a different kind of pain that he said was alleviated by work with a physical trainer. He didn't arrive here until Wednesday, played what appeared to be a pain-free practice round and started the tournament Thursday, shooting 74.

He made just three birdies in two days on a soft, benign courses that is allowing low numbers in droves.

Woods said he had no regrets about attempting to play this week.

"No, as I said, it's not where the surgery was," he said. "It's a different area. When I fell out of that bunker last week, it's the same feeling, the same pain and same spasms."

Asked if a long rest was necessary, Woods said, "I need to get stronger. As I said the other day, I need to get my glutes strong again, my abs and my core back to where I used to have them. They are just not quite there yet.

"Obviously by playing you can't burn the candle at both ends. I need to get stronger physically and be back to where I was."

Woods' struggles this year, and even in 2013, when he was winning five times on the PGA Tour but unable to add to his total of 14 major championships, have long been the source of conjecture in the game, especially as it relates to his golf swing.

It might simply be a matter of his back problems not allowing him to do it properly.

"It's hard because you want the bigger muscles controlling the golf swing. I have got to rely on my hands to do it. The (club) face is rotating so fast through impact because I'm just not able to get my arms and the body in the correct spot."

Woods' other major championship missed cuts came at the 2006 U.S. Open, 2009 Open Championship and 2011 PGA Championship, where he also was coming back after a long layoff due to injury. He holds the PGA Tour record for consecutive cuts made at 142, from 1998 to 2005.

"Only he knows his body; if he was ready he was ready," Woods' agent, Mark Steinberg, said. "We have to take it week by week. I'm listening to him. He's got to get it stronger. If that's what his doctors and trainers are saying, and he didn't do any damage to the surgical part, then I have no doubt that Tiger is going to go get his core and his back stronger so that this is not a regular occurrence."

Neither Woods nor Steinberg ruled out the possibility of him playing in the Ryder Cup, which is still seven weeks away. But Woods will require an at-large pick from captain Tom Watson on Sept. 2. Watson could pick him and Woods could withdraw prior to the competition if there were any lingering issues, but all of that appeared far from Woods' mind early Friday evening.

On Thursday, Phil Mickelson noticed that Woods' game was off and that he was dealing with issues and described his effort and showing "a lot of heart."

When told what Mickelson said, Woods replied: "That's always the way I play."

For the first time since turning pro, Woods has failed to post at least one top-10 finish in a major championship. And his season earnings totaled just $108,275.