Tiger Woods to play in PGA 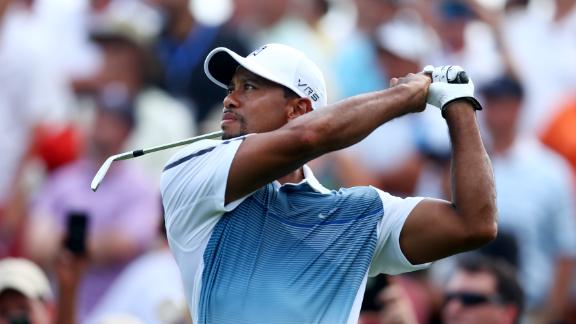 LOUISVILLE, Ky. -- Tiger Woods arrived at Valhalla Golf Club on Wednesday afternoon and, after a nine-hole practice round, pronounced himself ready to play in the PGA Championship, which begins Thursday morning.

Woods said the pain that caused him to withdraw from the WGC-Bridgestone Invitational on Sunday was unrelated to earlier back surgery that has forced him to miss two major championships this year.

"I felt pretty good about how I played and the shots I hit," Woods said. "I have to get used to how this golf course is playing."

Asked if he is in any pain, Woods said: "Pain-free, yes, except for the headache of talking to you guys."

That quip would suggest business as usual for Woods, but given how he looked just three days ago, that he was upright and hitting solid golf shots and talking positively about competing is somewhat remarkable.

Woods had to be helped into a golf cart after he hit his tee shot on the ninth hole of the final round and had difficulty changing his shoes and getting into his courtesy car to leave. It put not only this week's tournament but also the rest of the year in doubt. He traced the pain in his back to when he hit a shot from an awkward lie on the second hole at Firestone, and his momentum carried him back into a gaping fairway bunker. The force of the landing, he said, caused a problem he described as a sacrum bone being displaced.

"Yeah, basically when I landed in the bunker, my sacrum went out," he said. "So pinched the nerve, and hence the spasm. My physio put it back in, and we've just been treating it.

"My physio is here," he added. "If it does go out, he's able to fix it. One of those things, again, I still need to build strength, still continue to get stronger. Just going to take more time."

Woods returned to Valhalla for the first time since he won the 2000 PGA Championship, when he beat Bob May in a playoff for his third consecutive major win and fifth of his career. He was 24 at the time.

Now 38 and having dealt with numerous injuries that caused him to miss six majors since 2008, Woods had a long practice session and then teed off before a huge throng of spectators and media that was perhaps similar to what a regular event might see during an actual tournament round.

After he hit a driver into the fairway and knocked an iron approach onto the green, Woods and practice-round partners Steve Stricker -- who on Wednesday was named an assistant captain for the U.S. Ryder Cup team by Tom Watson -- Davis Love III and Harris English headed across a bridge. Woods then began walking toward the ninth tee -- not the second -- and had to be redirected.

So much for course knowledge.

"I need to get more feel for how this golf course is playing," he said. "I'm not used to seeing the chipping areas like this. We didn't have that in 2000. It was just deep, blue grass. That's a bit of a different look and different options."

Woods maintained that the injury he suffered Sunday was not related to the microdiscectomy surgery he had March 31, when a pinched nerve was alleviated.

"It was a different pain than what I had been experiencing, so I knew it wasn't the site of the surgery," he said. "It was different, and obviously it was just the sacrum."

Woods missed the Masters and the U.S. Open and didn't return to competitive golf until June at the Quicken Loans National, where he missed the cut. He had his worst 72-hole finish in a major at the Open Championship last month -- 69th -- and was heading toward a middle-of-the-pack result at the Bridgestone on Sunday when his troubles on the second hole led to numerous poor shots.

Something appeared amiss on the seventh hole, when he bladed a bunker shot and then grabbed his back after the tee shot at the ninth. Asked why he decided to try to play, Woods said, "Oh, I feel good. Once the bone is put back in, it's all good. The inflammation has been down. I've had range of motion. As you saw out there, I got my speed, my power, and I just need to obviously keep moving."

Woods said he decided Tuesday afternoon that he would likely play.

"My range of motion was good," he said. "I started my firing sequence ... it was back to normal. The sequencing was good. If my sequencing is good, it's all good."

The practice round was played before a tournament-like crowd, which prompted English's caddie, Brian Smith, to quip, "Things will be a lot quieter for us when the tournament starts."

That is unlikely to be the case for Woods, who tees off at 8:35 a.m. with former PGA champions Phil Mickelson and Padraig Harrington. His swing coach, Sean Foley, was on the range prior to the round and walked the entire practice round with Woods while giving bits of advice and counseling as they went.

"It was excellent on the range and very good on the course," Foley said. "I understand the nonsense that's out there [about Woods' game]. What I don't understand is that this is going to be just the 11th round of golf he's played competitively since April. That's what I don't get."

That is some important perspective, some that Woods himself is not always quick to embrace. For example, the idea of playing for the U.S. Ryder Cup team would seem remote, but Woods was asked about it anyway and asked what he felt he had to do to impress captain Tom Watson.

"Just play well," Woods said. "That's the only thing I can control. Try to go out there and win this event. That's all I'm focused on."