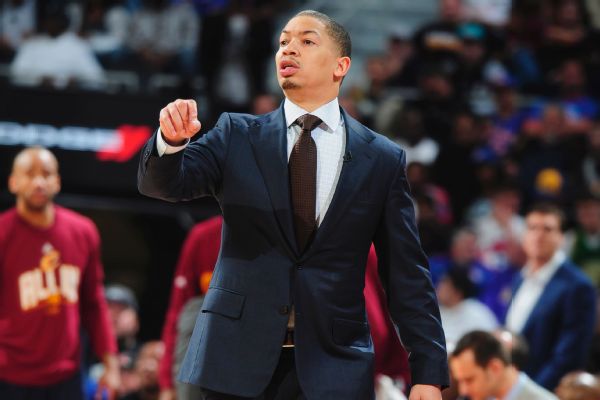 INDEPENDENCE, Ohio -- It wasn't exactly a case of, "New phone, who dis?" but Cleveland Cavaliers coach Tyronn Lue andCleveland Indiansmanager Terry Francona had a bit of a runaround trying to connect through text messages in recent months.

First Francona checked in to congratulate Lue after the Cavs beat the Golden State Warriors in the NBA Finals. The two met years ago in Boston when Lue was a Celtics assistant coach under Doc Rivers and Francona was managing the Red Sox to multiple titles.

"He sent me a text during the Finals," Lue said after practice Friday. "He had changed numbers, so I didn't really know who it was. When I was texting him the other night, I saw a text came from him, and I said, 'Oh s---. My bad.' He said, 'No, I understand. You got busy.' ... We cleaned it up, and I had a chance to talk to him the other night."

The Indians' run to the World Series has given Lue reason to reciprocate some four months later. With Francona's number now confirmed in his phone, Lue got in touch to congratulate him on his team beating the Toronto Blue Jays in the American League Championship Series this week.

"Just two professional guys in sports," Lue said of his relationship with Francona. "He's a great guy, and had a chance to meet him in Boston when he was with the Red Sox. Now coming here, it's just great to see him doing well -- happy for him."

Incidentally, Lue and Francona's connections don't stop at their shared time in Boston and Cleveland. They also are both linked to Michael Jordan, with Francona managing Jordan during his minor league baseball stint with the Double-A Birmingham Barons and Lue playing basketball alongside Jordan years later with the Washington Wizards.

The Cavs will receive their championship rings Tuesday when they host the New York Knicks on opening night at Quicken Loans Arena. The league moved the start of the game from 8 p.m. ET to 7:30 p.m., and the ring ceremony will begin at 7. That means Cleveland sports fans can watch the ring ceremony without conflict but must then choose between the Cavs opener and the Indians, who will be hosting Game 1 of the World Series at Progressive Field at 8 p.m.

Lue was asked how he would feel if fans with access to both games chose the Indians over the Cavs that night.

"Why would I be offended? The World Series is in town, and you have tickets to both, so you can do what you want," Lue said. "You paid money for the tickets, and you're going to support both teams. It's not like you're not supporting one team. If you think about it realistically, we already won and it's over, and they were there to support that. So now the Indians are going to the World Series, and it's a great time. Whatever they decide to do is on them."

Lue, who said he has watched some of the Indians' playoff performances with assistant coach Damon Jones and even attended an AL Division Series game against Boston, shared what he admires in Francona.

"Just changing the culture, bringing a team together, bringing individuals together and making them play hard together and like each other," Lue said. "That's what he does well, and he's going to continue to do that. He's done it so far this year."

The Indians' success has already rubbed off on the Cavs. Lue boasted about the "genuine" chemistry created in his team in training camp through group watch parties for Indians games.

"Just going to be very supportive," Lue said of the Tribe. "They deserve it, and the city of Cleveland deserves it."