Unburdened Candace Parker has Sparks one win away from repeat 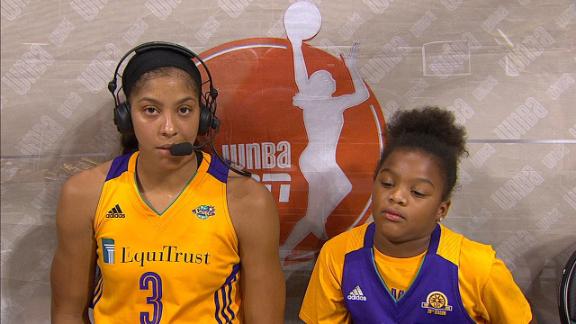 LOS ANGELES -- Candace Parker made the same walk last year. The exact same walk. From the press room to the Los Angeles Sparks' locker room, with her team leading the best-of-five WNBA Finals over the Minnesota Lynx 2-1 and an WNBA title within her grasp once again. Yet she felt entirely different this time. Lighter. Brighter. Unburdened.

Last year on this walk, the first time Parker had come to this precipice -- one game away from winning the championship that most observers thought she'd have a bookcase full of after her stellar college career at Tennessee -- the entire weight of her decade of unfulfilled expectations, frustrations and insults from a women's game that never truly knew how to embrace her, crashed down upon her.

She felt off in a way she couldn't quite put her finger on, but she knew she could discuss it only with a kindred spirit.

"I think sometimes people think great players don't have doubts," Parker told ESPN after the Sparks' 75-64 victory over the Lynx at Staples Center on Friday put them within one win of a repeat. "But people have doubts. People have weaknesses. They have things that are clouded in their minds."

She'd been feeling it all series and trying to work through it.

"I think it's a mind block," she said. "And that energy can kind of manifest itself in other situations."

She racked her brain for solutions. She'd won in high school and college before. She'd won gold medals at the Olympics. Come on, why was this different?

One night she got a text from an Orange County number. It was from Kobe Bryant. He'd been watching.

The next game, Bryant showed up courtside with his daughter to watch as Parker tried to put the advice into action, and boy did she try ... way too hard. This time, it wasn't doubt that got her. It was desire.

She started focusing on winning a title and not on the game. Everything became too big. In-game, she usually dominates by doing a million little things better than just about any women's player on the planet.

When Parker is rolling, she's filling up every corner of the stat sheet, not trying to drop 50 points. Like Friday. It was a classic Parker line -- 13 points, 7 rebounds, 5 assists, 5 steals, 3 blocks -- and a smooth control of the game at both ends of the court.

But in last year's Game 4, she lost that flow. Or maybe she just tried to grab a hold of it way too tight. Lynx star Maya Moore dominated with a relentless aggression and sent the series back to Minnesota.

The Sparks were still one game away from winning a title, but they'd have to do it on the road. Parker ran back the entire ugly 4-for-14 shooting night in her head. What happened? She'd been ready for the moment. She wasn't afraid of it, yet it slipped through her hands.

"For me to doubt myself in situations where I've prepared to do all that I can possibly do, I'm just cheating myself," she said Friday. "I think that's the biggest hump. Just mentally getting over that hump. I hate to use this example, but look at LeBron. He got to the Finals, and he had to learn how to win."

This time, she really was ready. In Game 5, Parker did everything she hadn't been able to before, finishing with a game-high 28 points and 12 rebounds as the Sparks won on Nneka Ogwumike's last-second game winner.

Everything afterward has been different. The game is easier, life is happier. All of the burdens she was carrying are lighter. Her team is even better.

"You think I'm laughing, but I'm like Tim Duncan with these ladies," she jokes of Duncan in his golden years with the San Antonio Spurs. "I don't have to do as much, and I don't want to.

In particular, she mentioned Sparks guards Chelsea Gray and Odyssey Sims, who dominated the Lynx on Friday.

"They're unbelievable with the ball," Parker said. "I enjoy playing with them. We make each other better. ... Odyssey and Chelsea are so different, and I think that's what makes them special."

Now Parker is back again, to the same precipice she fell off of last year. And the lessons are the same as they head into Game 4 at home on Sunday (ESPN, 8:30 p.m. ET).

"Last year we got ahead of ourselves," she said. "We can't focus on it being a championship. It's more so about us doing what got us here. I think our mind has to be right here, in the moment, on the game. You can't worry about what's happening ahead of you, because that's when your focus slips."

This time, on the long walk back to the locker room, Parker took her time. The title is just as close. She wants it just as much. But you can't rush these things. You can just be in the moment and try to enjoy it.

Sims ran over to Parker as she walked.

Sims smiled and ran off.

"She doesn't even know how good she is yet," Parker said, loudly enough for Sims to hear her. "You can tell that she's been knocked down. That's her story, that's our story. Everybody here has been knocked down, not wanted. That's what built our character." 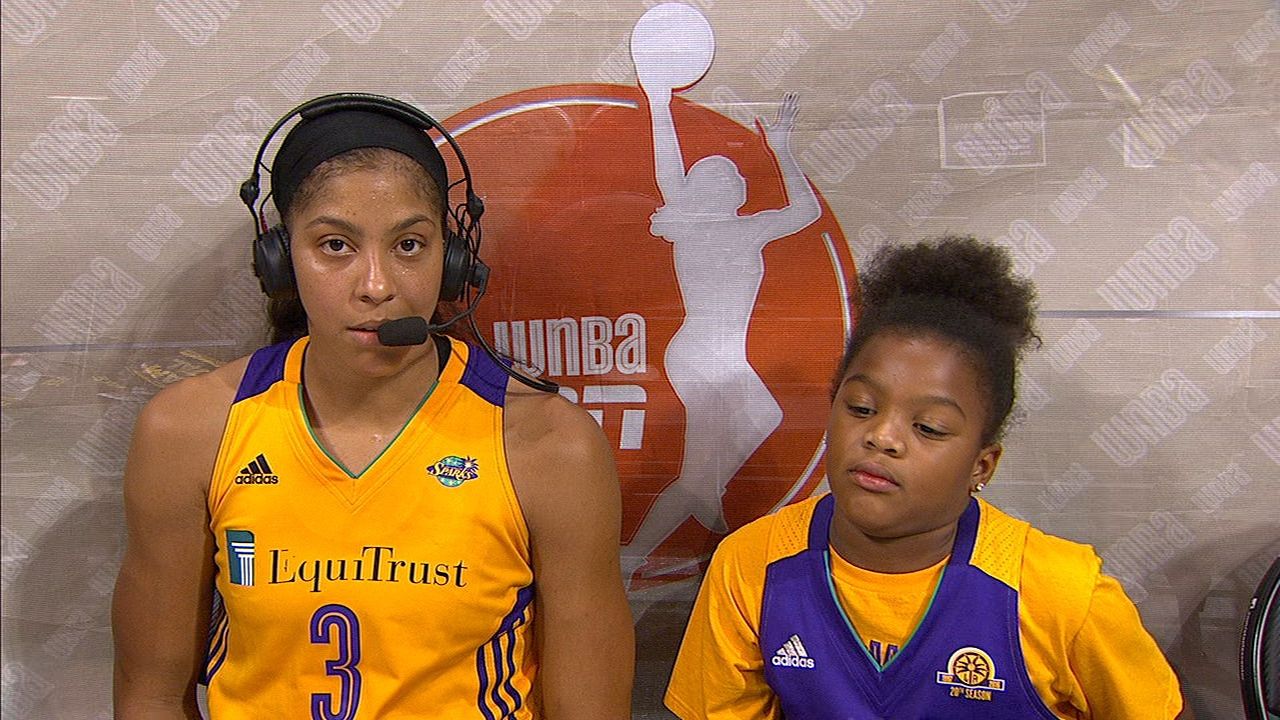 Parker credits defense for Sparks' Game 3 win
After filling the stat sheet for Los Angeles in Game 3, Candace Parker joins SC with her daughter, Lailaa, to talk about the Sparks' win over the Lynx in the WNBA Finals. 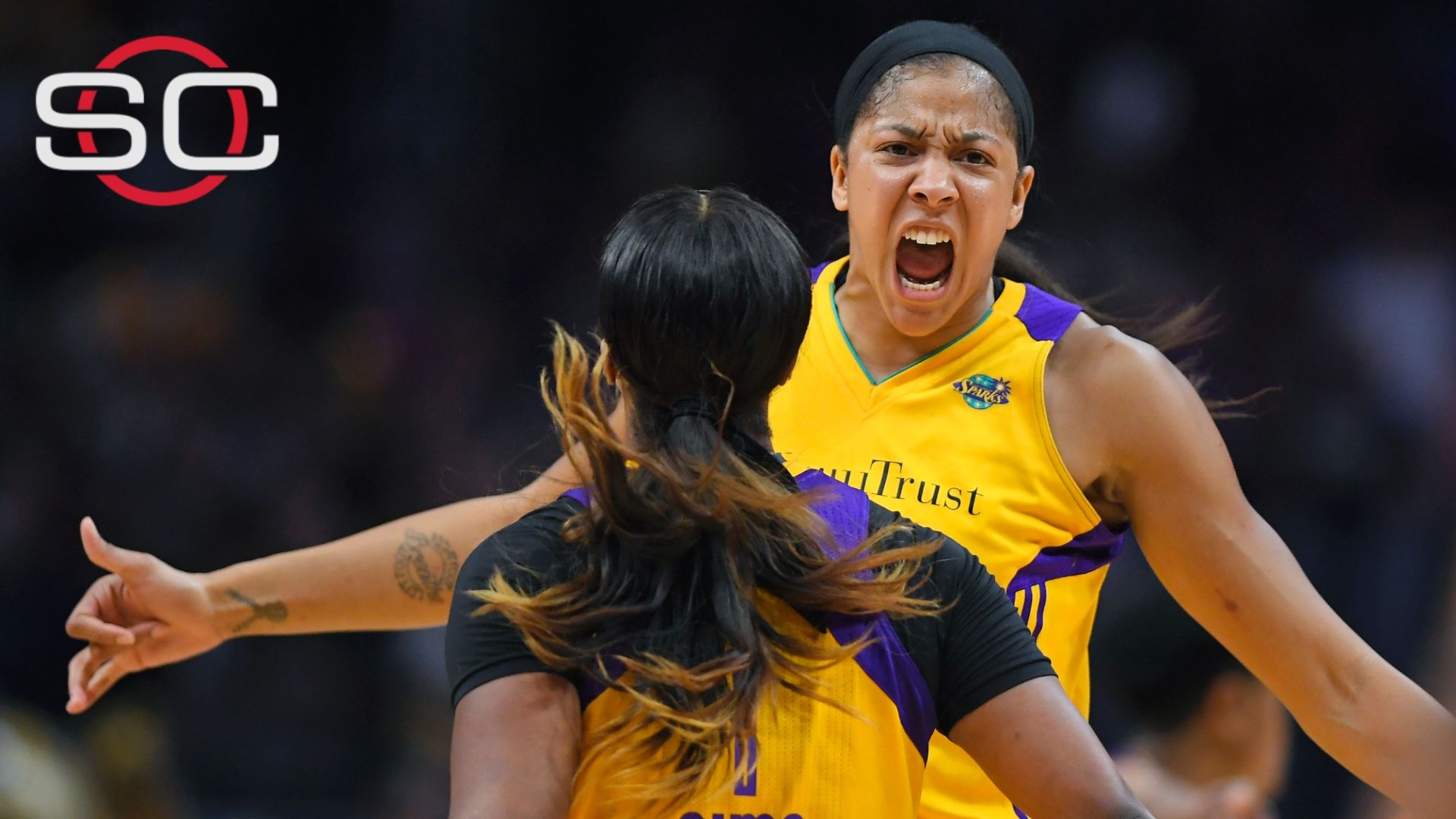 Sparks a win away from repeating
Candace Parker dominates on both sides of the floor and Nneka Ogwumike records a double-double in Los Angeles' 75-64 win over Minnesota, giving the Sparks a 2-1 lead in the WNBA Finals. 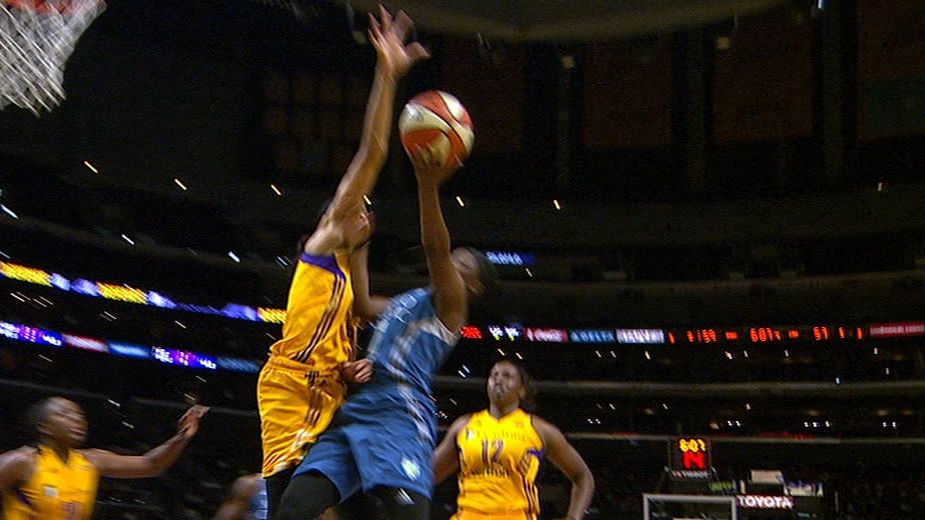 Parker makes big-time block in Game 3
Candace Parker denies Alexis Jones on a layup in the fourth quarter of Game 3, as the Sparks look to hold on to a tight lead. 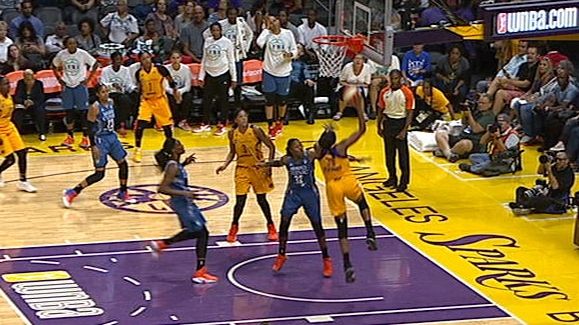 Gray drops no-look dime to Ogwumike
In the third quarter of Game 3, Chelsea Gray looks off the defense and finds Nneka Ogwumike for the finish. 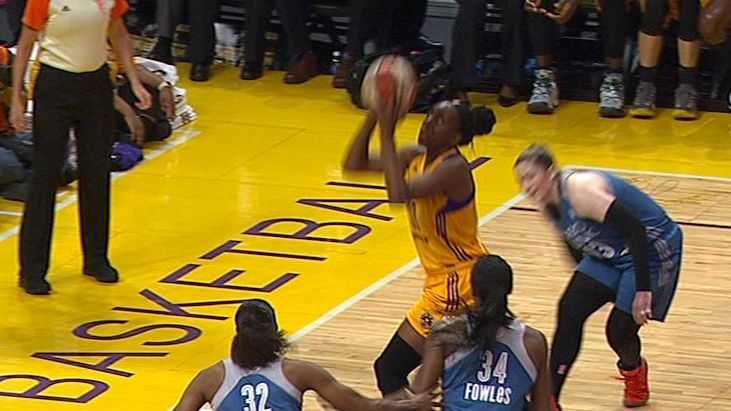