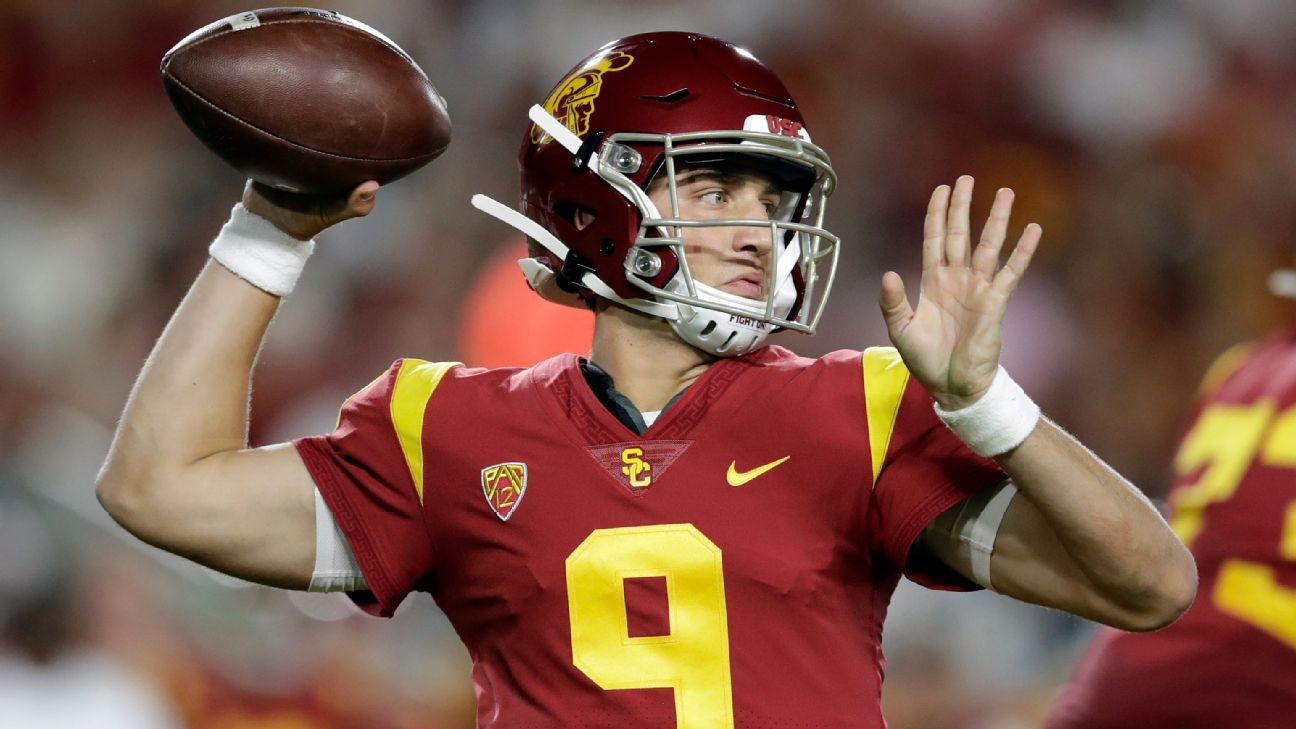 Slovis had been in concussion protocol for the past few weeks after suffering a concussion in the first series of the Trojans' 30-23 win over Utah on Sept. 20.

"We're glad to have him back," Helton said.

Both Slovis and redshirt junior Matt Fink are preparing as if they'll be the starter against the Irish this weekend, Helton said. Fink threw for 351 yards and three touchdowns with one interception after replacing Slovis against Utah, but threw for just 163 yards and three interceptions in the loss to Washington two weeks ago.

Slovis said Tuesday he "feels great" and has no concerns about playing on the road Saturday. "I don't think it makes a big difference whether I'm on the road or in the Coliseum. Just be disciplined, going through the reads, not letting the last play affect what I do the next time," he said.

Slovis, who has thrown five touchdowns to four interceptions since replacing former starter JT Daniels (ACL) during the opener against Fresno State, returns to face a Notre Dame defense that has allowed more than 200 passing yards in a game just once this season and has limited opposing quarterbacks to just three passing touchdowns in five games.

Although Slovis wasn't cleared to go through normal practice reps until Monday, Helton said that the freshman used the bye week to work and throw with receivers, and looked sharp the past two days.

"He does not look out of form to me," Helton said. "He looks really good. He came out today and I thought was very decisive with his decision-making, looked really good. Hopefully that continues and carries into South Bend."

With the practice time Slovis lost, offensive coordinator Graham Harrell said the key to getting Slovis game-ready is to get him as many reps as he can this week.

"He'll be ready," Harrell said. "He did a good job while he was out of getting mental reps and stuff ... he has a little bit of rust and stuff, and you can see it. His arm might not be as crisp as it was because he took some time off, but I do think it probably feels good because he gave it a little break. We got four more days to get him right and I think he'll be ready."

Helton also said that sophomore safety Talanoa Hufanga, who was also dealing with a concussion, has been medically cleared and the staff anticipates that he'll play this weekend. Sophomore cornerback Olaijah Griffin, who missed the Washington game because of a back injury, is "getting very close," Helton said, and practiced Monday and Tuesday. His status for Saturday is still unclear.
Report a correction or typo
Related topics:
sportsespncollege footballkedon slovisusc trojans
Copyright © 2020 ESPN Internet Ventures. All rights reserved.
More Videos
From CNN Newsource affiliates
TOP STORIES