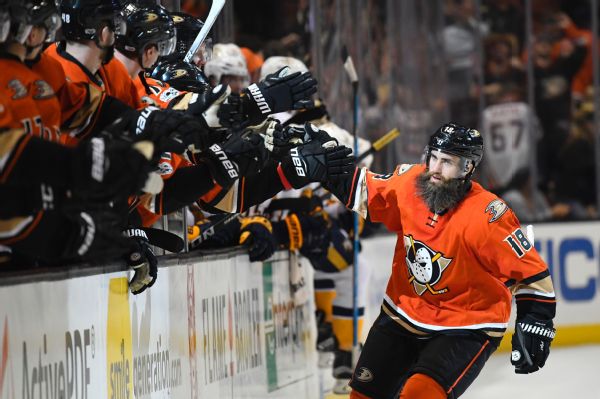 ANAHEIM, Calif. -- Patrick Eaves felt comfortable from the moment he stepped into the Anaheim Ducks' dressing room as a late-season rental player.

He decided to stick around a whole lot longer.

Eaves, a goal-scoring forward, agreed to a three-year, $9.45 million contract with the Ducks on Friday, choosing a long-term future with a Stanley Cup contender over a dip into unrestricted free agency.

"I spoke to my agent to tell him, 'This is where I want to be,'" Eaves said in a phone interview. "My agent knew that Anaheim, it meant something to me, and I wanted to be a part of everything that they're doing. Today, it all came to a head. I'm so excited to be there."

Eaves will return in the same important role that he played down the stretch and in the postseason for the Ducks before a sprained right ankle scuttled his 32-goal season before Anaheim reached the Western Conference finals.

The Ducks gave up a first-round pick to grab Eaves from the Dallas Stars in late February for the playoff push. Eaves fit right in with Anaheim on the ice, scoring 11 goals in 20 regular-season games alongside captain Ryan Getzlaf.

Eaves also enjoyed the competitive vibe around the Ducks, the five-time defending Pacific Division champions. Anaheim has the core of a perennial winner, and the 33-year-old Eaves wasn't interested in taking more money from a non-contender.

"Being in that locker room is something special," Eaves said. "I noticed that on day one. That was a big deal for me, for signing for three years. It was just something that I completely wanted to be a part of."

The contract also includes a no-movement clause of some sort for the duration, allowing Eaves to put his children in school in Orange County without worrying about another move.

Eaves' 32 combined goals for the Stars and Ducks were the most of his 12-year NHL career. He was a phenomenon on the power play, racking up 13 goals and five assists with the man advantage between Dallas and Anaheim.

Eaves then scored two goals in seven playoff games for the Ducks, but he severely sprained his right ankle and missed the Ducks' final 10 postseason contests. Anaheim advanced to the conference finals for the second time in three years, but ran out of offense with Eaves and Rickard Rakell sidelined by sprained ankles.

Eaves said his ankle should be fully healthy long before training camp in September.

Eaves also has suited up for Ottawa, Carolina, Detroit and Nashville. He reached the deal with Anaheim on an already special day: His parents celebrated their 38th wedding anniversary on Friday as well.