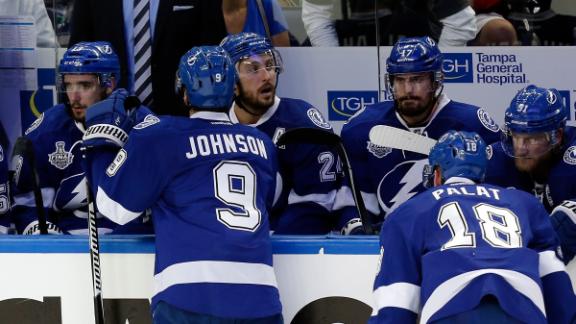 And while both were talking, neither player seemed interested in carrying on about the alleged incident and instead preferred to focus on Game 2 on Saturday night.

Shaw and Hedman got tangled up late in the first period Wednesday night behind the Tampa Bay net after Hedman pushed Blackhawks star Patrick Kane into the boards just after play had been stopped on an official's whistle.

After the scrum was broken up, Hedman was seen on the Lightning bench lifting his jersey to show a spot on his side to a team trainer. Hedman appeared to say that he had been bitten.

"Obviously, you see what I said," Hedman said after Friday's practice. "If you saw that, I don't have to say any more."

Said Shaw:"I'm not going to get into details. We're here to focus on the next game and, you know, hockey."

The NHL reviewed the incident, a source told ESPN.com. The league spoke to the four on-ice officials and watched video but found no evidence of the alleged bite. So, unless some evidence surfaces, there will be no discipline.

Hedman even went as far to compliment Shaw on the type of game he plays.

"He's a player you want on your team, obviously," Hedman said. "You want a player like that who can get under people's skin. He's just a great player. He's a big presence in front of the net. He's tough to play against. I really like players who play the style that he does."

And the feeling was mutual.

"He's one of the best players, and he's a highly skilled, big, strong defenseman with a lot of speed, and he went after one of our better players [Kane]," Shaw said of Hedman. "It creates scrums. ... I expect battles with him at the front of the net the rest of the series, as well."

The apparent bite is the latest in a strange history of players using their teeth in the Stanley Cup finals.

Boston's Patrice Bergeron accused Vancouver's Alex Burrows of biting his finger during a scrum in Game 1 of the 2011 series. Burrows wasn't suspended when the NHL couldn't find conclusive evidence of a bite. A year earlier, in 2010, Philadelphia's Daniel Carcillo accused Boston's Marc Savard of biting his finger. Carcillo now plays for the Blackhawks.

Pierre LeBrun of ESPN.com and The Associated Press contributed to this report.