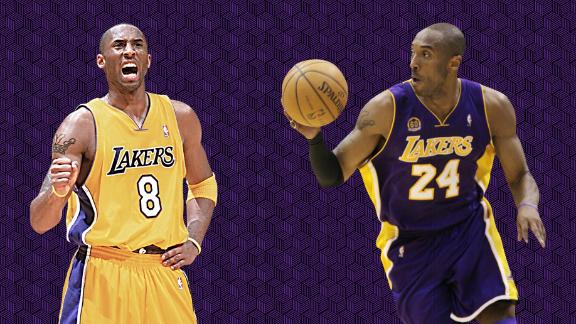 OAKLAND, Calif. -- When the Los Angeles Lakers hang the jerseys of Kobe Bryant in the rafters during halftime of Monday night's game against Golden State, Warriors coach Steve Kerr said the defending champs will be on the court taking in the festivities.

"Just the experience in seeing one of the greatest players in the history of the game getting his jersey retired and we happen to be there," Kerr said after practice Saturday. "I'm not going to keep them in the locker room to watch tape of the first half. The players would look at me like I was nuts. There's something interesting going on the floor. Let's go out there."

Bryant will have his No. 8 and No. 24 jerseys retired at Staples Center.

Warriors starKevin Durant said he received in-depth tutelage on competitiveness from Bryant during his rookie year when he played for the Seattle SuperSonics. The forward said Bryant's tenacity was unmatched and added that "it was a great early-season lesson."

"It was my first taste of fourth-quarter basketball in the NBA. He fouled me all of the way up until I got the ball. It was a blatant foul, and the referee just stared at him, looked at him and didn't call the foul," Durant said. "It was a level I knew I had to get to. That's what made me realize that there's certain players on different levels, and that you have to wait to get to that point."

When asked of his fondest memories playing against Bryant, Durant responded with the Oklahoma City Thunder advancing past the Lakers in the second round of the 2012 playoffs.

"That was a proud moment, playing so well, and finally beating his team in the playoffs," Durant said. "A couple of years before, they eliminated us in the first round. So, I can say that I won in one-on-one against Kobe in the playoffs. Not too many people can say that. But he does have five championships."

Warriors guardNick Young played three seasons with Bryant, and retold the story of how Bryant threw his Adidas in the trash when he asked the future Hall of Famer to sign them after his last game. Bryant has an endorsement deal with Nike.

"That's Kobe," Young said, laughing. "I knew something like that was going to happen if I went to him with some Adidas. But he did sign some Nikes of mine that I had."

It doesn't sound as if Young, this time around, will ask Bryant to autograph his shoes come Monday.

"I'm kind of scared," he said, chuckling. "There's too many cameras out there. He might throw my shoes in the crowd."

With Bryant's departure, the league is still in great shape with superstars such as Durant, LeBron James, Stephen Curry, Russell Westbrook, Kawhi Leonard and James Harden.

But Durant said there's still something about Bryant that will be missed.

"I do miss that intensity that he brought to the court," Durant said. "He raised everybody's -- opponents, coaching staff, just everybody's -- level of play. That's what great players do. You can learn a lot from watching somebody like that."