Who is the best former UConn player in the WNBA right now? 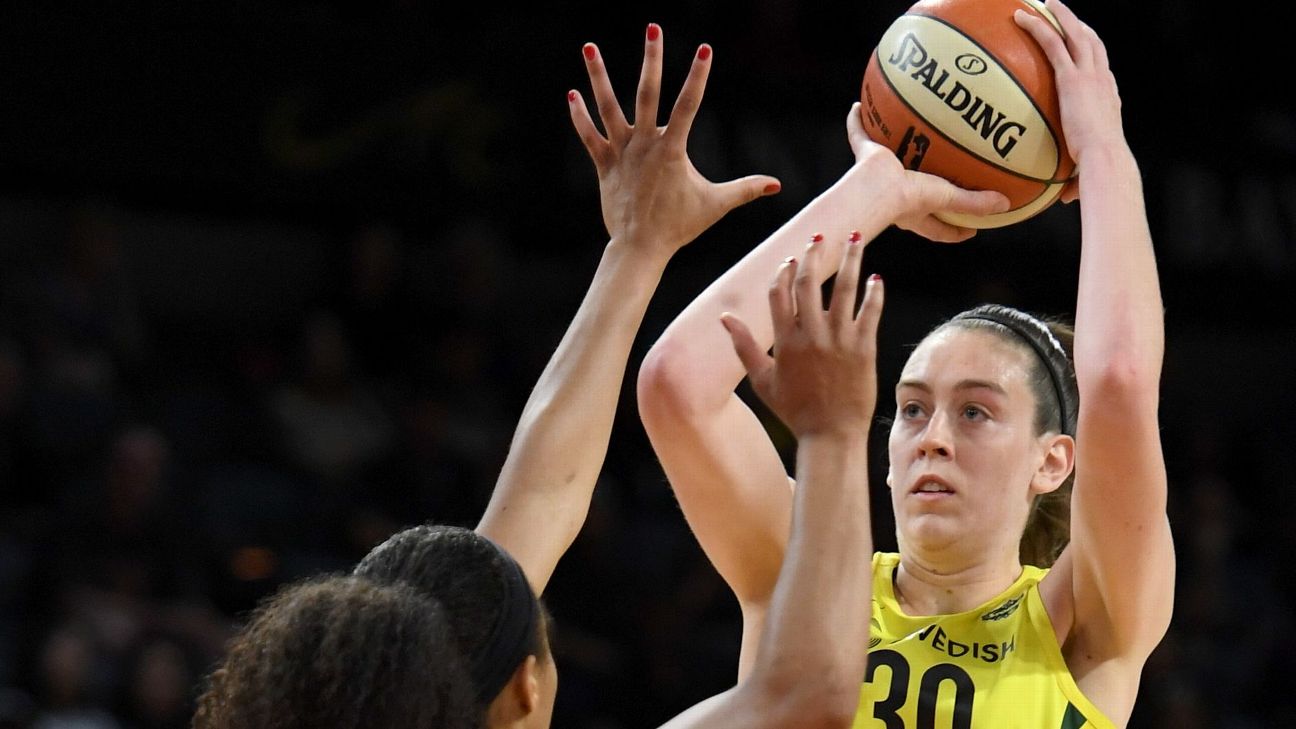 Two of the most successful franchises in WNBA history meet when the Mercury visit the Lynx on Friday (ESPN2, 8 p.m. ET). Minnesota has four league titles, Phoenix three. A collection of some of the best individual talent ever, in both college and the WNBA, will be on the court, with two passionate fan bases, neither much of a fan of the other, watching.

Surprisingly, both teams are 2-3, a position that's especially unfamiliar to the Lynx over the past seven seasons. During that period, they've won all of their titles, and have had a ton of success against the Mercury.

Minnesota has won its last 13 in a row against Phoenix, counting playoff series in 2015 and '16. The Lynx are 32-10 versus the Mercury (including 10-2 in the playoffs) dating back to the start of the 2011 season -- when forward Maya Moore came to the Lynx as the No. 1 draft pick.

She and guard Diana Taurasi, who went to the Mercury at No. 1 in 2004, will face off Friday. Their status as two of the all-time greats in their sport is already secured.

And they'd get the nod as the two best UConn grads ever in the WNBA, although Seattle point guard Sue Bird -- who has two championships and is the league's all-time assists leader -- also would be in that conversation.

But that leads us to a different kind of list: Who are the top five former Huskies right now in the WNBA? Not career-wise or reputation-wise or championship-wise. No, we're taking the temperature at this very moment, as the calendar turns to June 2018. Based on what we've seen so far, what's a current power ranking for UConn grads in the WNBA?

Hayes is the most undervalued UConn player ever in the WNBA draft, and has been a gem for the Dream. She went to Atlanta in the second round, the No. 14 selection overall, in 2012. Seven of the players picked ahead of her are not in the WNBA now. She was an All-Star last season, averaging 16.3 points and 3.8 rebounds, and has been an effective player throughout her WNBA career.

In this, her seventh season, Hayes is averaging 17.5 points and 2.3 rebounds for Atlanta (2-2), and scored 20 points in a 76-74 victory over the Lynx on Tuesday. She's also shooting a career-high 93.1 percent (27 of 29) from the free throw line. Hayes' 36 percent shooting from the field is below normal for her -- she has been over 40 percent in four of her seasons, including the past two -- but she and the Dream are still adjusting to new coach Nicki Collen's system.

No, we don't expect the preseason favorite for league MVP to be fourth on the list of Huskies in the WNBA for long. Moore and the Lynx are not used to the position they're in right now: below .500 and having lost two buzzer-beaters at the start of the season. Moore had a challenging opening game (11 points, 4-of-14 shooting) in the May 20 loss to the Sparks and against Alana Beard, the defender who has been her primary nemesis in the WNBA.

Moore is at 15.8 PPG, her lowest average since her rookie season, and is shooting a career-low 38.5 percent from the field. Her rebounding average (6.4) is up a bit from the past two seasons, though. And we can reasonably predict that she and the Lynx will figure out some things they've been struggling with in the first five games. They'll need to do that soon: Friday's home game versus the Mercury is followed by road games against three of the top teams in the league: Los Angeles, Washington and Connecticut.

The Mercury have had an uneven start, but Taurasi remains the leader and is still capable of making huge shots. She's averaging 16.2 PPG, while shooting 43.1 percent overall and 42.2 from behind the arc (14-of-33). With some of the changes in the Mercury's personnel, Taurasi isn't the playmaker she has been in the past. She's averaging 2.4 assists per game, and was at 2.7 last year. (Her peak was 6.2 APG in 2013.)

In her 14th WNBA season -- and first as a mom -- Taurasi continues to work on fostering leadership qualities in the rest of Mercury. Phoenix's 103-95 home loss to Washington on Wednesday was disappointing, especially the Mercury's lackluster defense against a Mystics team that didn't have Elena Delle Donne. And no team has been a bigger thorn in Phoenix's side the last several years than the Lynx. So we'll see how Taurasi and the Mercury respond Friday.

The Liberty are just three games into the season, but Charles has been impressive. She leads the league in scoring (23.7 PPG) and is fifth in rebounding (8.7 RPG). Her 34-point, 10-rebound performance against Dallas and 6-foot-8 center Liz Cambage in a 94-89 victory Tuesday was especially notable. Charles had 18 of those points in the fourth quarter as the Liberty got their first victory of the season, and also the first of Katie Smith's head coaching career.

Charles, the 2012 WNBA MVP, has been the centerpiece for the Liberty since being traded to the franchise in 2014, and also very involved in charitable causes. Throughout the challenges the Liberty face -- their current move to Westchester County and their impending (at some point) sale -- you can expect Charles will remain their leader.

In her third WNBA season, the Seattle forward is off to a great start. Same for her teammate, Jewell Loyd, and the Storm (4-1) as a whole. Heading into Thursday's game against Las Vegas, Stewart was in the top five in the league in scoring (21.4 PPG), rebounding (9.2 RPG) and blocked shots (1.6 BPG).

Stewart, the 2016 rookie of the year, came into the league as a pro-ready player on both ends of the court, and consistency has been one of her hallmarks. She has also embraced an active and courageous role on social media and other forums in regard to various causes close to her heart, including the #MeToo movement. Her visibility as a spokeswoman for the league continues to grow as her game is also still on the ascent. And she doesn't even turn 24 until the end of August.