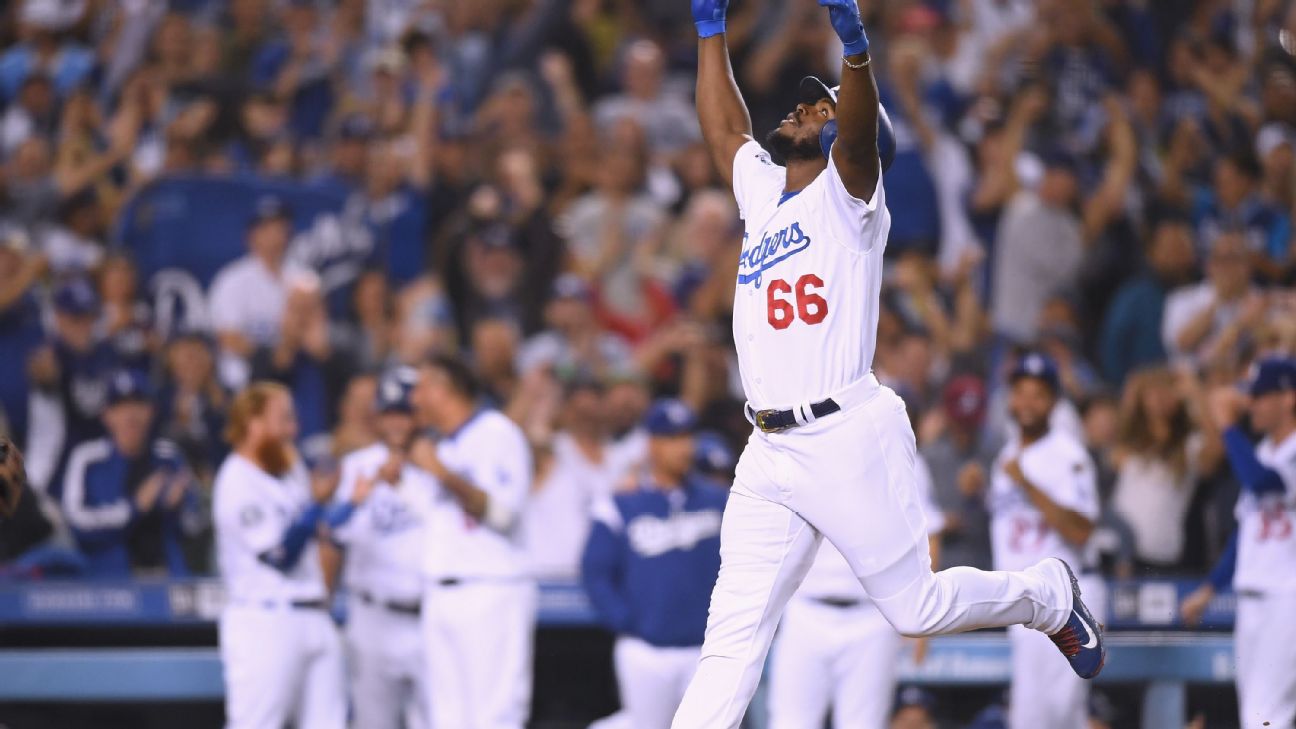 LOS ANGELES -- Yasiel Puig couldn't decide which celebration fit best, so he basically used all of them. He rubbed his fingers and flexed his biceps, clapped his hands and raised them to the sky, crossed his arms on his chest and brought them to his helmet, all while rounding third base and heading home to celebrate the game-winning, pinch-hit, three-run homer that keyed another Los Angeles Dodgers triumph.

Puig's home run -- with two on and one out in the bottom of the seventh -- ignited a 5-2 win and a three-game sweep of the Colorado Rockies on Wednesday, pushing the Dodgers to a season-best 2 games ahead in the National League West with only nine remaining in the season.

"This game, this series, was emblematic of our ballclub," Dodgers manager Dave Roberts said, "of how many people had their hands in this series to help win three games."

The Dodgers have won seven of their past eight, and Puig's prowess at the plate has mirrored their dominance.

Puig was out of the starting lineup these past two nights because his reverse splits made him a bad matchup against the Rockies' left-handed starters. He then pinch-hit for Brian Dozier against a right-handed reliever, Scott Oberg, and belted his sixth home run in his past 18 at-bats.

The most recent homer came about 24 hours after his home in Encino was burglarized on Tuesday night, the fourth such reported instance in a span of about 18 months.

"I didn't sleep too much yesterday," Puig said.

The outfielder halfheartedly said that "everything's OK," and police said Thursday that burglars caused $10,000 in damage while attempting to steal a safe.

Puig left Tuesday's game early to attend to the matter. He said he thought about making it back to Dodger Stadium before Chris Taylor's eventual 10th-inning walk-off homer, but there was too much traffic.

According to the Los Angeles Police Department, the suspects broke into Puig's home, ransacked the residence, found a safe in the second-floor master bedroom and dragged it downstairs to the front door before fleeing, leaving the safe in the entry way.

Police are seeking the public's help in identifying three suspects, including the driver of a black four-door Toyota vehicle with paper license plates. The same suspects are believed to have been involved in another burglary attempt at Puig's home on Aug. 30.

"Obviously there's been some things with him, but with athletes, a lot of times, when they get here, this is their kind of safe zone, where they can kind of get away, escape reality," Roberts said. "There's been so many guys for me in my three years that have really grown. And Yasiel is right at the top of the list. He was on the bench the entire game, watching the game, watching the pitcher, getting down there, taking swings, getting ready for a certain spot, and he was prepared."

Puig, 27, entered with an OPS against righties that was 286 points higher than his OPS against lefties since the start of 2017. But Rockies manager Bud Black elected to keep Oberg in the game to pitch to Puig, even though first base was open and lefty Chris Rusin was warming up in the bullpen.

Oberg threw a second straight slider slightly low and away, and Puig sent it 420 feet away to left-center field for his second career pinch-hit home run.

"I didn't try to hit a home run," Puig said. "I tried to hit the ball in the air, do something to not hit a ground ball."

Puig took it easy before Wednesday's game. He took some swings in the batting cage and watched a little bit of video, but he wasn't on the field with his teammates during customary pregame batting practice. It didn't matter, because Puig, a .400 hitter this month, is on another level right now.

He was asked if he had ever experienced a stretch like this.

The Dodgers might not be going home any time soon.

Their lead is starting to balloon, with FanGraphs giving them a 91.9 percent chance to win the division. Their starting rotation is as strong as it has been all year, especially with Walker Buehler, who allowed two unearned runs in six innings, looking like a legitimate co-ace. The back end of their bullpen might be starting to round into form around Kenley Jansen. And their lineup is consistently coming up with timely hits lately, none more timely than Puig's.

"We're going to win the West," Puig declared, "and go to the playoffs."