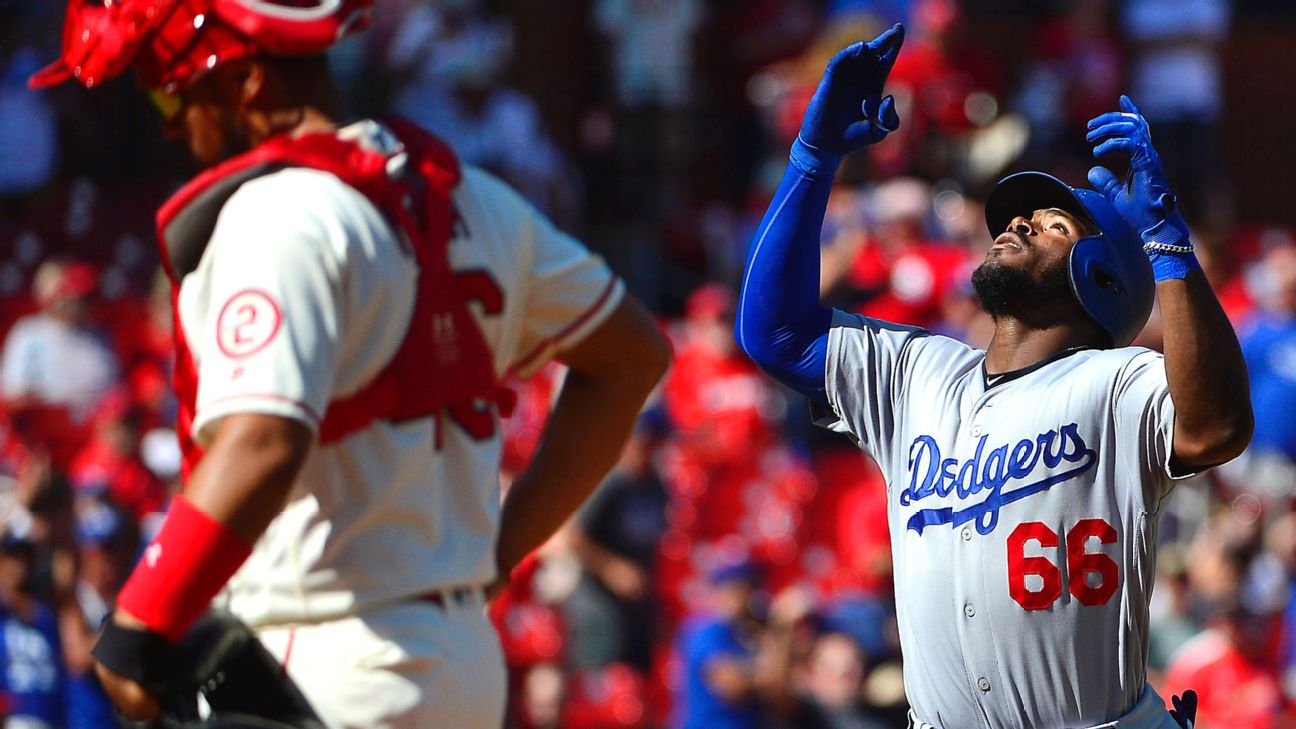 ST. LOUIS -- The Los Angeles Dodgers arrived in St. Louis for a four-game series with teetering playoff hopes and a need for their marquee players to get hot at just the right time. With three home runs on Saturday, and five in two days, Yasiel Puig has moved beyond hot into sizzle territory.

Puig drove in a career-high seven runs on Saturday in a 17-4 rout over the Cardinals while enjoying the first three-homer game of his career. It was an impressive follow-up to Friday, when he belted two home runs against the Cardinals.

"I feel good at the plate," Puig said. "I'm trying to look for good pitches to hit and trying to hit the ball in the air, like my teammates and my coaches talked to me. They told me I needed to stop hitting ground balls."

With the win, the Dodgers moved a game ahead of the Cardinals for the second wild-card slot in the National League. L.A. has taken the first three games of the series, with the finale set for Sunday.

The Dodgers also moved into a tie for the lead in the NL West with the Rockies, who play at San Francisco later Saturday. After a year of some surprising ups and downs, the Dodgers look like a team that is coming together just in time.

"We know we're talented," manager Dave Roberts said. "You see guys pulling for each other. Part of what you love about this is how is to compete and to be a part of something. We understand the importance of it. You can see our guys having a good time with it."

Puig made sure of that, showing off his tender side by kissing hitting coach Turner Ward on the cheek after leading off the fourth inning with a homer as the Dodgers built an early 3-0 lead.

That good vibe disappeared with one swing of the bat by the Cardinals'Patrick Wisdom, who made L.A. starter Rich Hill pay for walking the bases full in the fourth by clubbing a grand slam, giving St. Louis a 4-3 lead and injecting life into a sellout crowd at Busch Stadium.

"I made too many bad pitches in a row," Hill said. "We're swinging the bat at the right time. What Yasi was able to do last night and today, and the way the offense has come around as a whole has been huge."

The Dodgers didn't sulk for long: L.A. scored 14 unanswered runs, including five in the half-inning after Wisdom's blast. That rally was capped by a laser-beam, three-run shot from Puig. According to Statcast, the ball rocketed off Puig's bat at 114.7 miles per hour, the fastest exit velocity of any Dodgers player this season.

And the dugout fun continued, with Ward kissing Puig on the cheek.

By the time Puig hit his third homer, the rout was on. He hit a shot to left in the eighth for his second three-run homer of the day.

And the celebration? Puig wanted a smooch on the lips, but as Ward went in, he put his hand between their mouths.

Said Puig: "That's a little bit too much."

Puig now has six home runs in September and 21 for the season. Over his last three starts, he is 9-for-12. Sizzling. It couldn't have come at a better time.

"We play hard every day because we want back in the playoffs every year," Puig said. "We [want to] win the West for the sixth time in a row. We need to play like a team, like family, hard every day and every pitch."

With 17 runs on the board, obviously the Dodgers' performance wasn't merely a solo act by Puig. Teammate Cody Bellinger drove in a career-high six runs -- and it wasn't even a team high. It could be a sign of things to come.

"[Puig] is a specimen," Bellinger said. "I think he's been really close to doing what he knows that he can do. It's going to be pretty scary."