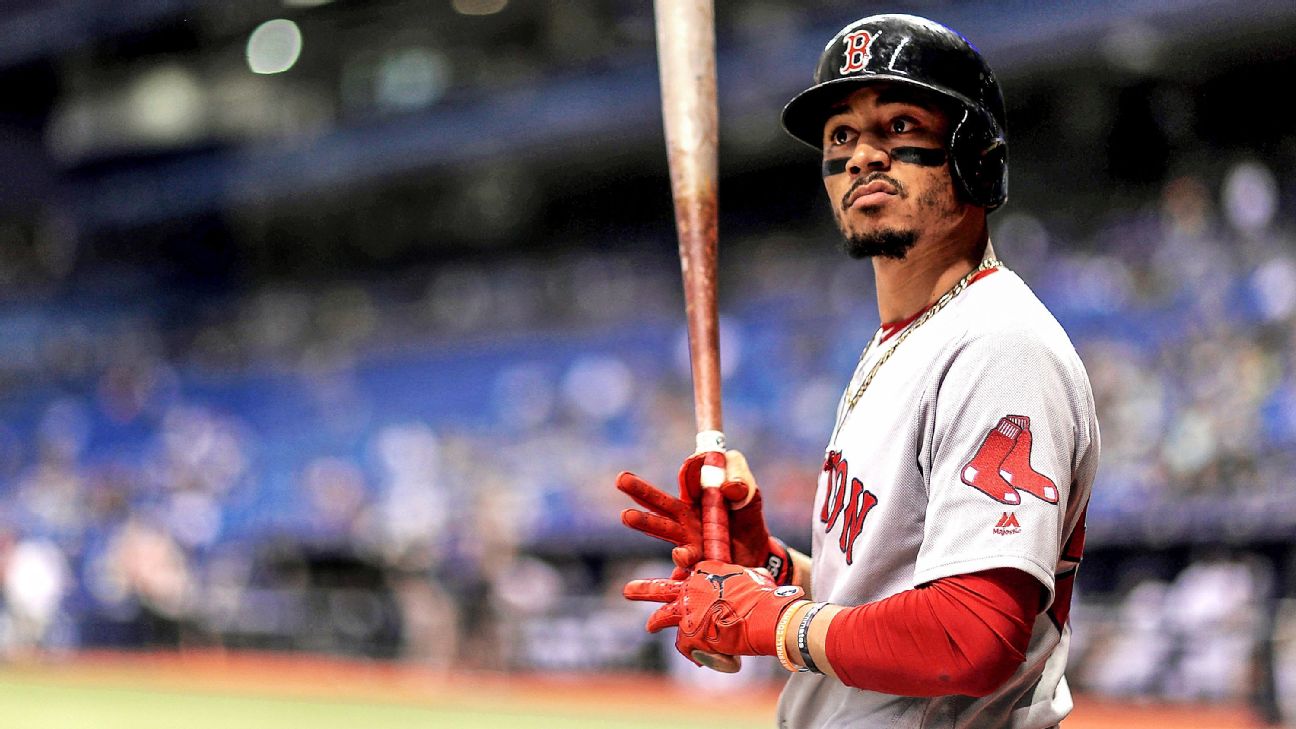 Two weeks ago, after Mike Trout crossed the quarter mark of the season, we wrote he was on pace to challenge, by wins above replacement, the greatest season in history. Outrageously, we put his name alongside Babe Ruth's and declared Trout might be better. Naturally, this raised the ire of many readers, who were aghast, appalled, that we would dare put Mike Trout ahead of Babe Ru-

That's Mookie Betts through the 48 games he has played this season, against Mike Trout the first 48 games he played this season. We wrote about Trout, but Betts is also insane and phenomenal and very arguably playing as well as Ruth did during the best season in major league history, when Ruth produced 14.1 WAR. As long as we're talking about "on pace," Betts is on pace to hit 50-plus homers, steal 40 bases, win the batting title, score more runs than anybody since Lou Gehrig and put up the highest American League slugging percentage since Ruth. He almost certainly won't do any of those things -- "on pace" is a trap for overzealous sportswriters -- but he has done them for a third of a season. We didn't try to rebut the Mookie supporters because there was no reason for rebuttal. We support Mookie!

We wrote about Trout, not Betts, in part because Betts has played fewer games, which matters a lot for "on-pace" reasons. Betts missed the Red Sox's 15th game with a bruised foot, their 21st game for a routine day off, their 27th and 28th games with a tight hamstring, and he has since missed their 53rd, 54th and 55th games with tightness in his side. (Trout has played every game so far.) Because of those missed games, Betts wasn't on pace to break Ruth's record for single-season WAR, and he still isn't. If he's exactly this good for the rest of the season, and plays every game, he'd end up at 13.2 WAR, which would be only the second-greatest season in history. Psh.

But "psh" aside, there's no reason not to write about Betts. The point of the Trout piece was more to talk about what a 14-WAR player looks like over 40 games, and Betts has been every bit as good and, in some ways, more interesting doing it for now 48 games:

This is the main offensive component of WAR; it takes the value of every individual offensive act, tallies all of those offensive acts, adjusts them for offensive environment (e.g., ballpark), and estimates how many runs those acts were worth in sum. (Ten runs, roughly, make one win above replacement.) Betts' raw numbers get a little bit of a boost from his hitter-friendly ballpark, while some of Trout's are suppressed a bit by his being walked so often, but batting runs helps put those raw numbers in context. Sure enough, Betts really has outhit Trout this season, with more hits and total bases, and fewer strikeouts, overwhelming his OBP disadvantage.

Here's my favorite Betts fact so far: Every player will, inevitably, swing at some pitches out of the strike zone. No matter how good a player's eye -- and Betts, with a 10th percentile chase rate on pitches outside the zone, has an excellent one -- he will sometimes be tricked or cajoled or backed into chasing after a pitcher's pitch. Twenty-two times this year Betts has hit a pitch that would likely have been called a ball, according to ESPN Stats & Information. On those 22 batted balls, he's hitting .409, and slugging .909.

In fact, consider what Betts has done this year, relative to previous Mookie Bettses:

WAR, which ignores the timing of a player's hits (runners on vs. bases empty, close game vs. blowout) probably undersells Betts' value this year. By win probability added, he has helped the Red Sox quite a bit more than Trout has helped the Angels, and his 2.60 WPA is the best in baseball. (Trout, at 1.54, ranks eighth.) Nobody has outhit him with runners in scoring position, and only Andrew Benintendi has a higher OPS in "high-leverage" situations.
Put simply: If Trout keeps hitting the way he has, it'll be the best offensive season since Barry Bonds' four-year peak. And if Betts keeps hitting the way he has, it'll be even better.

Betts has one more stolen base than Trout, but he was twice thrown out attempting to steal, while Trout has been perfect. In addition to those caught stealings, Betts has been out on the bases (attempting to advance an extra base, or doubled off on a fly ball or line drive) three times this year, while Trout has been out on the bases only once. And Trout has taken the "extra" base -- going first to third on a single, scoring from second on a single, or from first on a double -- in 50 percent of his opportunities this year, while Betts has taken the extra base 41 percent of the time. Added up, that's one extra base for Trout, and four extra outs from Betts. But Betts is still excellent, ranking 17th in all of baseball. (Betts has been a more valuable baserunner than Trout in each of his previous major league seasons.)

The defensive component of WAR combines two things: how many runs a player has saved relative to an average player at his position, and a positional adjustment depending on which position he plays. This is where it gets complicated, controversial and inconclusive, because Betts plays right field -- which has a lower positional adjustment than center field -- but he could play center field, and probably play it pretty well. He plays right field -- in a notoriously large and challenging park for right fielders -- because Boston center fielder Jackie Bradley Jr. is that good, not because Betts is in any way bad.

In theory, this should wash out. Betts would get a smaller positional adjustment than Trout (10 runs over the course of a full season) but his defensive ratings would be exceptional, because he'd be playing a position he's overqualified for and he'd be compared to sluggish corner outfielders who play the rest of the league's right fields. In practice, though, positional adjustments are inexact, drawn from the limited pool of players who played multiple positions, and might be wrong.

Whether this hurts or helps Betts isn't clear. Over the past two years, Betts -- as a right fielder -- had the highest defensive WAR of any outfielder, second in dWAR only to shortstop Andrelton Simmons. The positional adjustment hurt him, but being compared to right fielders really, really helped him.

This year, though, he has only pretty good defensive numbers in right field. According to Sports Info Solutions, which provides the defensive data for Baseball Reference's WAR, Betts has saved 5 runs relative to an average right fielder, which puts him among the league's best corner outfielders. That's quite a bit lower than his defensive runs saved in previous seasons. Trout has saved 7 runs compared to the average center fielder, a much better defensive cohort. That suggests he's having the best defensive season of his career, or at least since he was a rookie.

That's four paragraphs to tell you this: A big part of each player's defensive WAR is based on a difficult-to-calculate adjustment that might benefit Betts, might penalize Betts, and -- just to make all of this extra frustrating -- will quite possibly change sometime in the future, meaning Betts' 2018 WAR might change long after the 2018 season ends.

What we do know is Betts has been a very good defensive outfielder as a major leaguer, an elite right fielder with the tools that suggest he'd be at least a good center fielder. So, in three statements:

1. There's a pretty good case to be made that Betts would be a better center fielder than Trout, and is in a broad sense a more valuable defender than Trout.

2. There's a pretty good case, though not a conclusive one, that this year specifically Trout has been the better, more valuable defender.

3. There's a really good case that two months of defensive metrics, laid atop an inexact positional adjustment, do not answer either question, and that WAR is neither omniscient nor the final say on a player's value.

But there's another reason, the biggest one. On-pace articles, we said, are traps for the overzealous writer. Betts almost certainly isn't going to keep this pace up, any more than Charlie Morton is going to go 20-0, Justin Verlander is going to have a 1.11 ERA, or Kevin Pillar is going to hit 60 doubles. It's interesting to see what those periods of exceptional performance look like, and worthwhile to celebrate them, but "on pace" very rarely means "in the process of," and there's a reason Babe Ruth holds records that have stood for almost 100 years. Most players, even in their best seasons, even when everything breaks right, simply aren't capable of surpassing them.

Except, maybe, with Trout. It's Trout, not Betts, who has led the league in WAR every full season of his career, and very nearly in a non-full season. It's Trout who has produced the second-most WAR in history through age 25, who has the most ever in ages 20-25. It's Trout who testsand inspires our imagination for what's possible. Trout is not just "on pace" to challenge the Babe's best season. He is demonstrably capable of it. To say he might be having the greatest season of all time isn't merely an observation, but a leap of faith.

Since Trout played his 48th game, he has batted .409/.536/1.091, with four homers and three doubles and two steals in six games (entering Tuesday). He has passed Betts in batting runs, and added almost an entire win above replacement in those six games, improving his record-WAR pace to 14.7.

He probably won't finish ahead of Ruth. "On pace" is a trap, and regression is the thwack of that trap. But the season was a quarter over when we wrote about his better-than-Babe pace, and now it's a third over. His pace is even better now, because he's Mike Trout, and that's something he can do.

Maybe it's something Betts can do, too. I'm certainly not looking away. I believe Mookie Betts is one of maybe a half-dozen active players capable of matching a typical Mike Trout-like season. If I had to vote for an MVP today, I would probably consider the clutch stats, consider my relative confidence levels in offensive and defensive stats, and vote for Betts.

But he's not going to beat Babe Ruth. That's not a leap of faith we're prepared to take. He can prove us wrong, but, really, even if he doesn't, there's no shame in a player being not quite the best of all time.