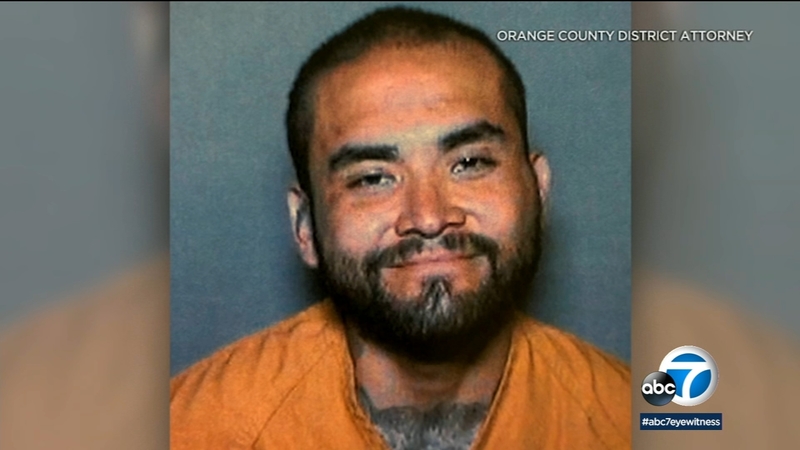 GARDEN GROVE, Calif. (KABC) -- A known gang member pleaded not guilty after he was charged Friday with 11 felony counts in connection with a stabbing and robbery spree in Orange County earlier this week that left four people dead and two others hospitalized, according to court records.

Police have said that Zachary Castaneda, a 33-year-old convicted felon, has refused to work with law enforcement. The Orange County District Attorney's office said they were once again dealing with the uncooperative suspect after he refused to leave his cell to be formally charged in court. Castaneda was arraigned from his cell Friday afternoon.

Shortly after the charges were announced, which include four counts of murder, officials released the name of the fourth victim who had yet to be identified. Gerado Fresnares Beltran, 63, was one of the two people fatally stabbed in a Garden Grove apartment complex, according to the Orange County coroner's office. Authorities said Castaneda also lived in the complex, but it's unknown if he knew the neighbors.

Castaneda was taken into custody by undercover Garden Grove police detectives at a 7-Eleven in neighboring Santa Ana on Wednesday. He "could have injured or killed many other people," had he not been apprehended, Garden Grove police Chief Tom DaRe said.

The arrest came after a deadly two-hour rampage that began with a residential burglary and ultimately comprised of seven crime scenes in two cities. Among those locations was an insurance office in the 12800 block of Harbor Boulevard, where a 54-year-old female employee was attacked by a man wielding two large knives, police said.

The man accused of stabbing six people, killing four of them in #GardenGrove and #SantaAna Wednesday, Zachary Castaneda, faces 11 felonies, including murder. His arraignment is scheduled to start at 2:00 at the Central Justice Center. @ABC7 pic.twitter.com/eqeKIbn014

Authorities released disturbing surveillance video of that attack, which left the victim hospitalized in critical but stable condition. She and another wounded victim, a man whose nose was almost severed off by an assailant at a Garden Grove gas station, are expected to survive.

The suspect is eligible for the death penalty after also being charged with several enhancements of multiple murders and committing murders during a robbery.

If convicted on all charges, Castaneda faces a minimum sentence of life in prison without the possibility of parole.