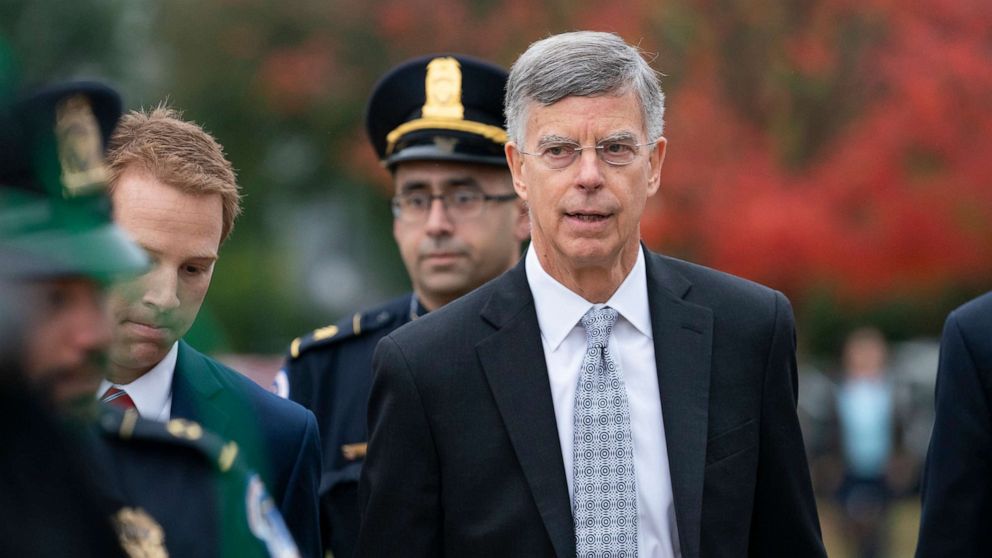 The top U.S. diplomat in Ukraine told members of Congress that that President Trump himself ordered a hold on foreign aid to Ukraine until the country's president publicly declared that they would investigate Joe Biden, his son Hunter and debunked theories about the 2016 election.

During his closed-door testimony, William Taylor described some of the conversations he had with his diplomatic colleagues including Kurt Volker and current ambassador to the European Union Gordon Sondland.

"During that phone call, Amb. Sondland told me that President Trump had told him that he wants President [Volodymyr] Zelensky to state publicly that Ukraine will investigate Burisma and alleged Ukrainian interference in the 2016 election," Taylor said his opening statement obtained by ABC News.

Russia and Turkey came to an agreement Tuesday to share control of Syria's northern border, just as the agreement between the U.S. and Turkey to pause the fighting reached its deadline.

ABC News' James Longman explains that as part of the agreement, the Kurdish people will be pushed out of even more territory: "This is sealing the Kurdish defeat...in northern Syria."

Facebook founder and CEO Mark Zuckerberg is set to testify before the Financial Services committee today, days after the social network announced it had taken down a number of accounts linked to Russia and Iran it says were attempting to meddle in the 2020 election.

New York Magazine writer Brian Feldman tells "Start Here" that "the pitch Zuckerberg is putting forward is essentially that Facebook has grown up."

Lester Eubanks, who was convicted and sent to death row for the 1965 murder of a 14-year-old girl, has been missing for 46 years after escaping from a prison-sanctioned shopping trip.

The U.S. Marshals have recently made the Eubanks case one of their "Top 15 Most Wanted."

ABC News Senior Investigative producer Matthew Mosk has been embedding with the Marshals for the new ABC News podcast, "Have You Seen This Man" and tells us about the manhunt.

'Our entire city is in mourning': Authorities believe they have recovered the body of a missing Alabama toddler who was kidnapped while attending a birthday party earlier this month.

'On the edge': One teenager was shot, allegedly by another student, near a Northern California high school Tuesday morning, authorities said.

'Disgusting': Oregon police have released body camera footage of the controversial arrest of a black college student who clashed with officers after they stopped her for allegedly riding her bike on the wrong side of the road.

'Clear top tier of candidates': The still-very-crowded Democratic presidential primary has been polled pretty extensively this year, giving observers a sense of who's doing well in their efforts to win over likely Democratic primary voters and caucusgoers and who is having a hard time gaining traction.

"Harry and Meghan: An African Journey" -- which airs in the U.S. on Wednesday at 10 p.m. ET on ABC -- follows Harry and Meghan, the duke and duchess of Sussex, through their 10-day tour of Southern Africa earlier this month and explores what has been happening behind the scenes for the couple.

Both Harry, 35, and Meghan, 38, spoke candidly with ITV News at Ten anchor Tom Bradby about the struggles and pressures they are experiencing in the public eye, including how they have navigated being newlyweds and new parents in the public spotlight.