Spielberg channels his inner kid to make 'Ready Player One' 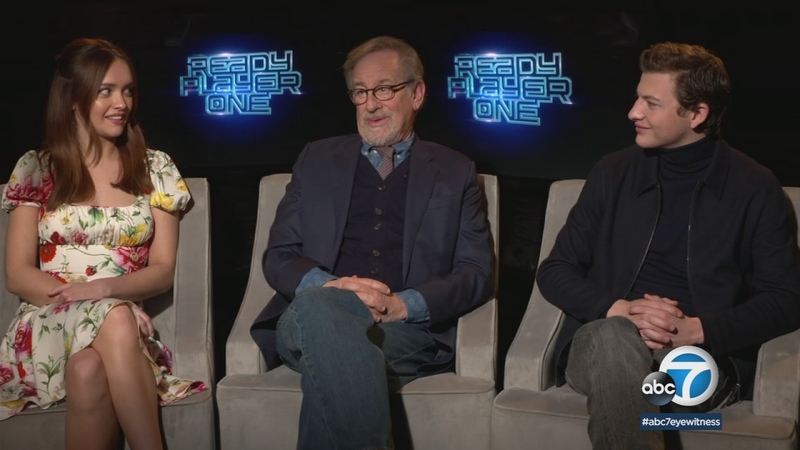 Spielberg channels his inner kid for 'Ready Player One'

LOS ANGELES (KABC) -- Director Steven Spielberg is considered one of the masters of his craft.

"Schindler's List," "The Color Purple" and "Saving Private Ryan" represent some of his more serious films.

"Close Encounters of the Third Kind," "Raiders of the Lost Ark" and "E.T." show his more adventurous side.

And so does his latest movie, "Ready Player One."

The film is based on the best-selling novel of the same name, and takes place in 2045, when things are bleak.

To escape the real world, most people spend a lot of time in a virtual world known as "Oasis." It's there they can be anyone they want to be in a much more exciting place.

However, when the man who created this world dies, it's up to a small group to save Oasis from the dark side.

Spielberg chose actors Tye Sheridan and Olivia Cooke to play his leads, because he thought they both had a "sparkle."

"Olivia came in and the light was there when she walked through the door. It's not a switch she has to turn on. It comes with her," said Spielberg. "The same thing with Tye. And I also thought, 'what are they going to be like together?' So I put them in a room together and did a scene and they were magical."

"It's very big in scale and when you watch it, it's a big adventure movie," said Sheridan. "But it's crafted in a way that is so graceful and elegant and it is easy to follow and it doesn't seem like it's too much - even though there's a lot happening in this movie."

There is plenty of action in "Ready Player One." And when it comes to also playing their "avatars," Cooke was awestruck with the end result.

"I feel like they really captured the performances and the chemistry that Tye and I had on the day," said Cooke. "And so watching that and seeing my mannerisms and facial expressions and my little idiosyncrasies, it was just mind-blowing."

For the director, this movie magic is all in a day's work. And he let us in on his secret for appealing to that "inner teenager" no matter your age.

"Before I could return you to your youth, I had to return myself to mine," said Spielberg. "And I think that's what both the book and the screenplay - and working with these great actors - brought out of me. I felt I was a kid again making movies, actually the kind of movies I used to make in the '80s. I felt I was not imitating that but I felt I was in that world again."