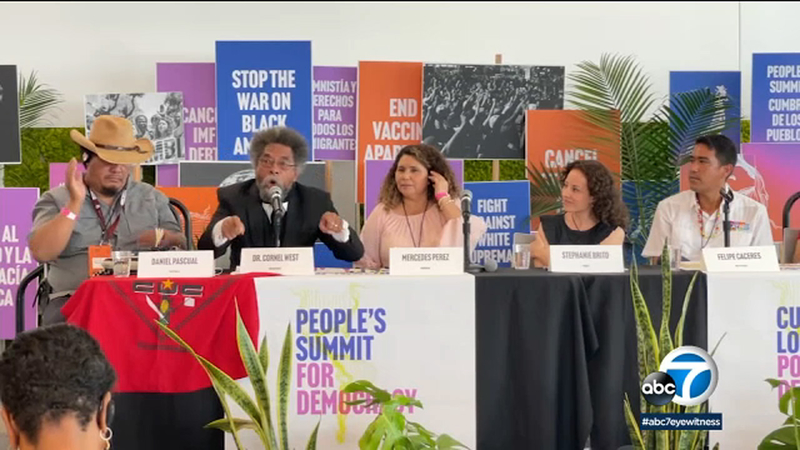 People's Summit in LA counters Summit of the Americas

LOS ANGELES (KABC) -- Less than two miles from the Summit of the Americas, a counter summit was underway.

The summit's organizers stress they are elevating topics and people who were left out of the Summit of the Americas.

"What does it mean for Black and brown people to be the ones fighting against police brutality? Those are conversations that are not being had at the Summit of the Americas because it's not convenient for the leadership of this country to hear from the voices of those who are experiencing these conditions," said De La Cruz.

President Joe Biden, Vice President Kamala Harris and local leaders formally opened the 9th Summit of the Americas Wednesday in downtown Los Angeles, but it was met with some opposition.

On Friday, a panel on transnational organizing for labor justice featured speakers from Central America, Mexico and the U.S. covering the intersection of policy, migration and justice.

Among the speakers was author, activist and philosopher Dr. Cornel West.

"I have solidarity with my brothers and sisters because they are human beings, who in their body's come from various genders and skin pigmentations, but they choose to be freedom fighters, and love warriors, and wounded healers and joy spreaders," said West.

More than 200 groups were represented at the summit from different parts of the world and different cultures, including Anggie Hernandez from Venezuela. She spoke of the impact of U.S. sanctions on women in Venezuela, who are often providers for their families.

They suffer not only for themselves, but for their children, Hernandez said.

"There has been high levels of participation from different organizations, community members from L.A.," said De La Cruz. "We understand that this is a huge responsibility, too, to be able to continue to build upon this ground that has been the People's Summit which is part of a larger legacy of struggle and movement building in this country."