San Pedro man with muscular dystrophy honors person who made him a die-hard Rams fan: his brother

"My brother made me who I am today," said Beto of his brother, who also had muscular dystrophy and died in 2013.
KABC
By Christiane Cordero 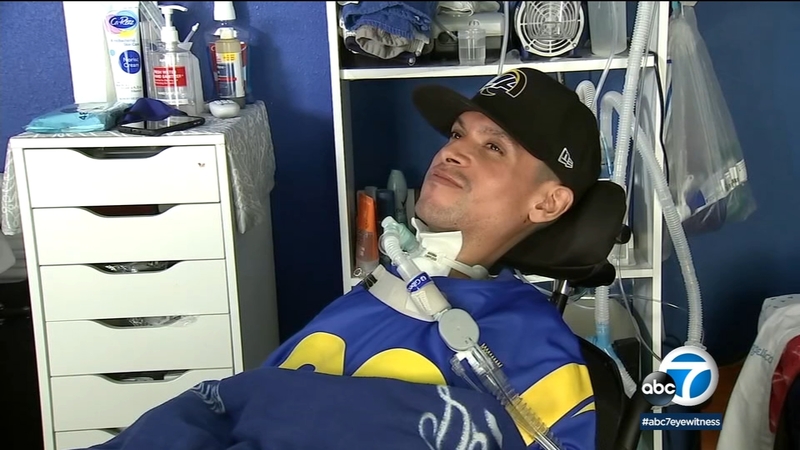 SAN PEDRO, LOS ANGELES (KABC) -- If you step inside 29-year-old Alberto Rodriguez's bedroom at his family home in San Pedro, it's evident that he's one of the most loyal Rams fans there is.

The walls are bright blue and Rams décor brings the entire room to life. He said he loves the team's defense and his favorite player is Aaron Donald.

"He's a beast," said Alberto, who goes by Beto.

Rocking a pair of Rams socks to match his jersey, he proudly showed off his team spirit during an interview with Eyewitness News. The 29-year-old's infatuation with sports has followed him throughout his entire life.

Beto was born with muscular dystrophy, which causes progressive weakness and loss of muscle mass.

Though he's never been able to run, watching sports became an outlet, marveled at what the human body is capable of. He said he lived his life vicariously through the players. As a Rams fan, however, that's easier said than done.

"Stressed out," said Beto on this year's post season. "I've been stressed out all the time, but it's been exciting. It's been good."

As the big game approaches, the Rams wanted to make sure an Inglewood beauty supply story continues to thrive.

One might think he's been a Rams fan as long as he's been a sports fan, but doing so wouldn't tell the whole story. Believe it or not, Beto's home was once a house divided.

He would talk a big game against the Rams when he would watch games with his older brother, Ramon.

If you ask Beto about his brother, surprisingly, he runs out of words.

Ramon was also born with muscular dystrophy. He died in 2013 at just 24 years old.

"My brother made me who I am today," said Beto. "Happy, outgoing, and happy."

It just felt right for him to inherit the team that brought his big brother so much joy. Three years after his brother passed, Beto got all the confirmation he needed.

"It's crazy that I became a Rams fan and they came to L.A.," said Rodriguez. "They came back."

They came back, alright.

The Rams will take on the Cincinnati Bengals for the Super Bowl at SoFi Stadium, and Beto will most certainly be watching.