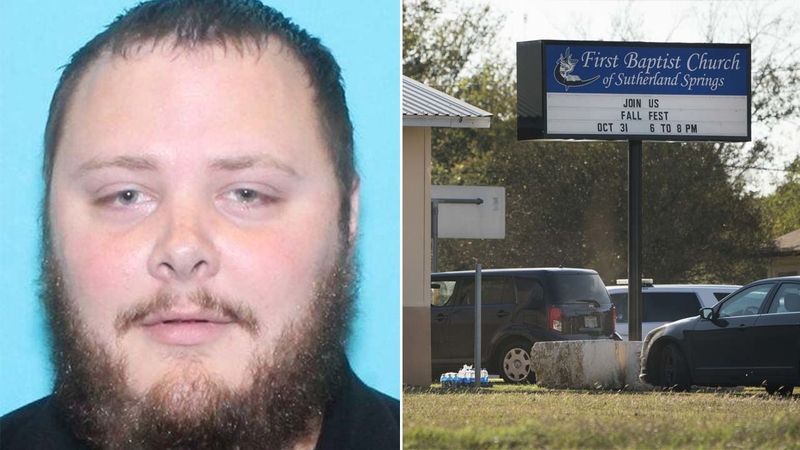 A day after the mass shooting at the First Baptist Church in Sutherland Springs, Texas, a collection of law enforcement, including Texas Department of Public Safety and the Bureau of Alcohol, Tobacco, Firearms and Explosives, gave updates on the investigation during two press conferences.


According to authorities, at least 23 people, whose ages ranged from 18 months to 77 years old, died at the church. One person died outside the sanctuary, and another two died at the hospital.

An armed resident who encountered the gunman Devin Kelley shot at the suspect as he tried to make his escape, authorities said. Kelley had dropped his assault-style rifle and was shot during this face-off.

That neighbor was able to fire two to three rounds at Kelley as he left the church. Kelley returned fire with a handgun before getting in his vehicle and speeding from the scene.

The 26-year-old shooter also used his cellphone to tell his father he had been shot and did not think he would survive, authorities said.

Kelley led two private citizens on a pursuit for six miles that ended with his vehicle running off the road and into a ditch. He was later found dead with a self-inflicted gunshot.

Three weapons were recovered. A Ruger AR-556 rifle was found at the church, and two handguns were found in the gunman's vehicle, according to the Bureau of Alcohol, Tobacco, Firearms and Explosives. Kelley did not have a license to carry any of the firearms, according to the ATF.

The shooter, who DPS officials in an afternoon press conference refused to name as to not glorify him, sustained three wounds - two from the citizen who shot him in the leg and torso - and a third wound that was self-inflicted to the head.

DPS Regional Director Freeman Martin said investigators collected a substantial amount of evidence, including hundreds of shell casings from the scene, along with at least 15 empty magazines that held 30 rounds each.

Authorities also said Kelley's mother-in-law attended the church and that there was domestic tension between the two leading up to the shooting. It was not known if Kelley's relative was attending services when the shooting happened.

It is not believed that the shooting was racially or religiously motivated, and terrorism is not under investigation.

Investigators also revealed that Kelley had been confronted about domestic violence at least twice in the last five years, including an assault on his ex-wife and a child that ended his Air Force career and another report of violence against a girlfriend who became his second wife.

Authorities confirmed that Kelley had served in the U.S. Air Force and that he was dishonorably discharged, which would result in him being restricted from firearms purchases.

An Air Force record of the Kelley court-martial says he pleaded guilty to multiple specifications of assault, including striking his wife, choking her with his hands and kicking her. He also was convicted of striking his stepson on the head and body "with a force likely to produce death or grievous bodily harm."

Under Pentagon rules, information about convictions of military personnel in crimes like assault is supposed to be submitted to the FBI's Criminal Justice Investigation Services Division for inclusion in the National Criminal Information Center database.

For unspecified reasons, the Air Force did not provide the information about Kelley as required.

Acknowledging its mistake, the Air Force said in a written statement that the top two Air Force officials - Air Force Secretary Heather Wilson and Chief of Staff Gen. David Goldfein - have ordered a review of the Kelley case by the Air Force Office of the Inspector General.

Later Monday, the Pentagon issued a written statement saying it had asked its inspector general to work with the Air Force to review the handling of criminal records in the Kelley case. It also said the inspector general will "review relevant policies and procedures to ensure records from other cases" throughout the Defense Department have been correctly reported to the FBI.

"Our church was not comprised of members or parishioners. We were a very close family," said Sherri Pomeroy, the wife of the church pastor, who was out of town with her husband when the attack happened. "Now most of our church family is gone."

The couple's 14-year-old daughter, Annabelle Pomeroy, was among those killed.

Wilson County Sheriff Joe Tackitt spoke to ABC7's sister station KTRK-TV Monday morning and said 12 to 14 children were among the victims of the shooting.

Investigators said Kelley entered the church from the back and fired as he walked to the front.

"He just walked down the center aisle, turned around and my understanding was shooting on his way back out," said Tackitt, who said the gunman also carried a handgun but that he didn't know if it was fired. Tackitt described the scene as "terrible."

The church has posted videos of its Sunday services on a YouTube channel, and authorities said they were reviewing footage recorded inside the church.

The sheriff has spoken with the neighbor who shot Kelley, but that man doesn't believe he's a hero. He does not want to speak publicly about what happened. Investigators said if he hadn't been there the shooter would have gotten away.

Investigators said most of the people in the church had been shot or wounded. Many of the parents attempted to shield their children from the gunfire.

Kelley's wife and child are safe in New Braunfels, Texas.

All of the bodies of the victims have been removed from the church and taken to the medical examiner's office.