The couple has been banned from Walmart for a year, a spokesperson for the retailer said.
CNNWire 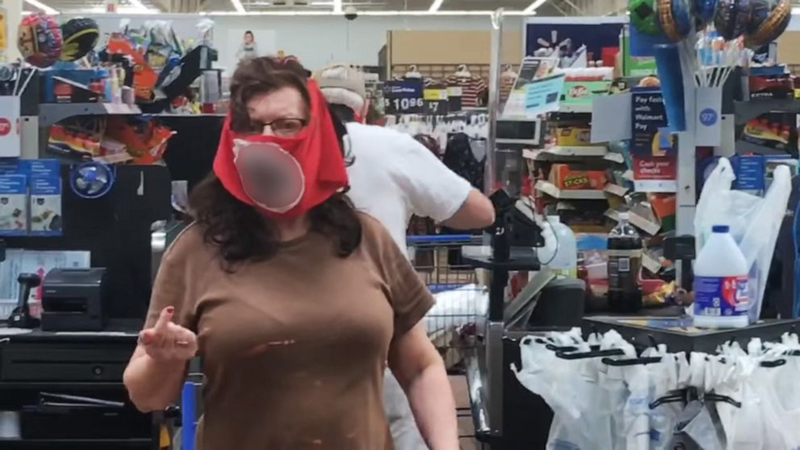 MARSHALL, Minn. -- When Raphaela Mueller saw a couple wearing swastika masks in a Minnesota Walmart, she knew she had to say something.

"I never knew that I'd see this with my own eyes," Mueller said. "But we have to be aware and be prepared to step in."

Mueller was born in Germany, and her great grandmother fought in the resistance against Nazis during the 1930s and 40s.

Her personal history compelled her to speak out against the use of the hate symbol, she told Don Lemon on CNN Tonight Monday. "I thought to myself that if I don't say something now, what did my great grandmother risk her life for all those years fighting against the first wave of Nazis?"

Mueller and her partner, Benjamin Ruesch, were in a Walmart in Marshall Saturday, the same day an executive order requiring masks in all public places and businesses took effect.

When they saw the unidentified man and woman checking out their groceries with swastika masks draped across their faces, Ruesch began confronting and recording the couple. "You're sick ... You have an illness," he told them as the unidentified woman appeared to pose for the camera.

'I have a right to my pizza': Woman who refuses to wear mask goes on tirade after she's denied service
EMBED More News Videos

Video captures an irate woman at a pizza place berating staff for refusing to serve her order because she wasn't wearing a mask.

"You can't wear that mask. You cannot. We literally had a war about this," he continued. "You're wearing a swastika!"

The woman wearing the mask responded, "I'm not a Nazi. I'm trying to show you what's going to happen in America. If you vote for (Joe) Biden you're gonna be in Nazi Germany. That's what it's going to be like." The man with her added, "We're living under a socialist state."

"That was one of the most shocking parts of all of this," Mueller explained, "that she was so proud to, to be wearing a mask like that."

She said that other shoppers mostly kept their head down and tried to ignore the situation with the exception of one man who stepped in.

Neither Walmart nor authorities identified the couple.

The video has brought international attention to the town, with the mayor telling CNN affiliate WCCO people have been reaching out to him from near and far.

"The incident that played out on Saturday was just a small snapshot and is not reflective of the entire picture of Marshall," Mayor Bob Byrnes said in a statement Monday, WCCO reported.

"We were surprised it unfolded at all anywhere in Minnesota. It's unfortunate that it happened in our community," Byrnes told the affiliate.

Byrnes said the couple is not part of any hate group and will not face legal trouble, WCCO reported.

Marshall Police did not respond to requests for comment from CNN but told the Star Tribune that they served a 59-year-old man and 64-year-old woman with trespass notices at the Walmart and warned them they would be arrested if they returned. The two left without incident and charges were not pursued.

"We strive to provide a safe and comfortable shopping environment for all our customers and will not tolerate any form of discrimination or harassment in any aspect of our business," Garcia said. "We are asking everyone to wear face coverings when they enter our stores for their safety and the safety of others and it's unfortunate that some individuals have taken this pandemic as an opportunity to create a distressing situation for customers and associates in our store."

The couple has been banned from Walmart for a year, Garcia added.

Antisemitic attacks on the rise in the US

The disturbing display comes on the heels of a report by the Anti-Defamation League that antisemitic incidents and attacks are more frequent than ever in the United States.

More than 2,100 acts of assault, vandalism and harassment were reported last year, according to the ADL, which has been tracking these incidents since 1979. An Audit of Antisemitic Incidents released in May showed a 12% increase in incidents and a 56% increase in assaults in 2019.

"This was a year of unprecedented antisemitic activity, a time when many Jewish communities across the country had direct encounters with hate," ADL CEO Jonathan A. Greenblatt said in the May release. "We are committed to fighting back against this rising tide of hate and will double down on our work with elected leaders, schools, and communities to end the cycle of hatred."

But despite attempts to educate the public about the atrocities of the Holocaust, as well as the discrimination and danger Jewish people face in the US and globally, a swastika mask still made its way onto the faces of two people in a Minnesota Walmart.

"It's been shown that trauma gets passed down in the DNA, so I know I'm carrying what my great-grandmother went through," Mueller told CNN. "I didn't lose anybody in the Holocaust but I know that so many other people did. So just the thought of them having to see this, it's heartbreaking."

Mueller said she thinks the woman in the store may not have even known exactly what that mask represents, and others still don't grasp how hurtful the swastika is.

"It's also very apparent that she doesn't quite understand the difference between socialism and democratic socialism and national socialism," Mueller said. "I also get the feeling that she may not entirely understand just how offensive that symbol is to a lot of people."

Mueller said that while she's gotten a great outpouring of support from people on social media, she can't believe that something like this is still happening.

"There have been so many incidents and so many people have shared their story, and said how much it hurts them to see symbols like this," Mueller explained. "And they're still not listening. So quite honestly, I'm at a loss for words there."
Report a correction or typo
Related topics:
societyminnesotaface masknazisswastikacoronaviruscoronavirus pandemicu.s. & worldcovid 19
TOP STORIES
Corona shooting: 'Look at me!' victim's dad yells at suspect in court
Disney joins list of companies requiring vaccine for nonunion workers
Mud, debris flow forces closure of Highway 38
CDC COVID map shows areas of high transmission in SoCal
3.2-magnitude quake hits Redlands area, USGS says
ABC7's Adrienne Alpert signs off after 25 years at KABC
Osteria la Buca restaurants to require proof of COVID vaccination
Show More
2 dead after small plane crashes in Banning
Monster trade: Dodgers get Max Scherzer, Trea Turner from Nationals
Ex-police chief who rescued baby pleads guilty to assaulting kid's dad
CDC document warns delta variant spreads as easily as chickenpox
Disneyland Resort visitors react as indoor mask mandate is reimposed
More TOP STORIES News