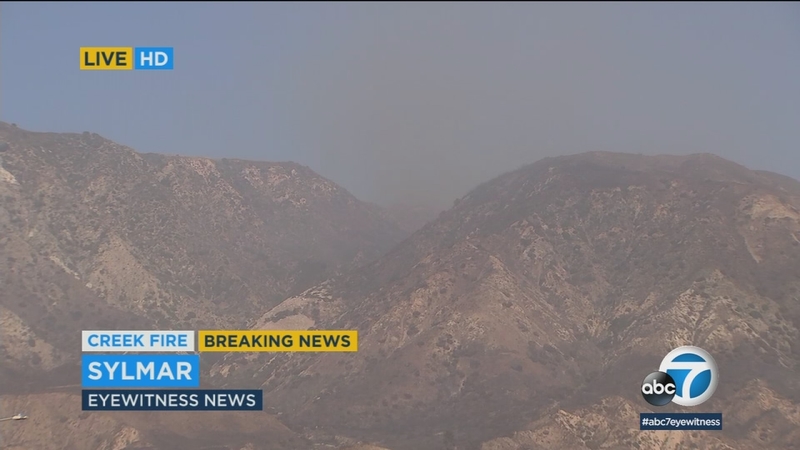 SUNLAND, Calif. (KABC) -- The Creek Fire in the Sunland-Tujunga and Sylmar areas had scorched more than 12,000 acres by Wednesday evening.

Fire officials said the blaze was estimated at just 5 percent containment after burning 12,605 acres as firefighting efforts continued well into the night.

Early Wednesday morning, the California Highway Patrol reopened both sides of the 210 Freeway, though some off-ramps remained closed.

Approximately 120,000 people were impacted by evacuation orders due to the Creek Fire.


Police are monitoring the evacuated neighborhoods to prevent looters.

With the fire moving on from some Sylmar neighborhoods, some residents were lined up in their cars hoping to be allowed back home.

But officials said the evacuation orders would remain because the winds were expected to kick back up again Wednesday night, keeping the fire danger real.

"We want to go home," said Kelly Aquino, who had waited around for hours trying to be allowed back to her house in the Mountain Glen II development. "Right now we're at a hotel. Bottom line is we just want to go home back to our own house, find out what's going on with our properties."

She believes her home was spared from the flames, but did suffer some damage from the winds. Other neighbors down the road at Santiago Estates weren't so lucky, where a number of properties were burned.

More than 800 firefighters from different agencies and more than 50 engines were assisting in the firefight.

Several firefighters were injured battling the blaze - three were reported to be in stable condition, and at least two were expected to be released from hospitals on Wednesday.

Gov. Jerry Brown also declared an emergency in Los Angeles County for the Creek Fire, as well as the Rye Fire.