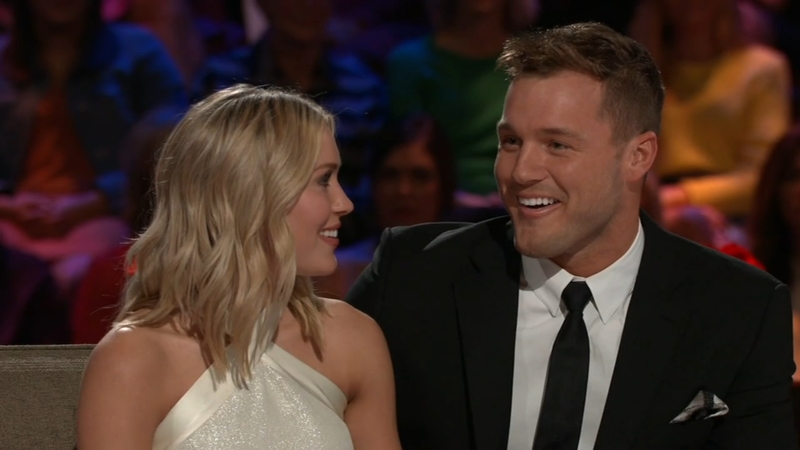 NEW YORK -- At long last, it was time to learn the final outcome of this extremely dramatic season of "The Bachelor." We watched Colton knock on Cassie's hotel room door and she seemed surprised, yet happy to see him. He asked her to take a walk downstairs so they could sit outside and talk. He told her that he "sacrificed and gave up everything." Cassie said, "Sacrificed everything...what?" Her eyes were like saucers and she gasped when he told her. He said he could have gotten everything he wanted with both of the other remaining women, but it wouldn't be with who he wanted. Colton said he just wanted to take their relationship day by day.

Cassie had a hard time forming a sentence for a bit and then said that she was worried that what they felt on the show might not be real. She wanted to be sure about what she felt without the pressure of the show. She said that she was worried that he would resent her in the future, and Colton said that compromise and sacrifice are just part of loving someone. He told her he is 100 percent sure that he loves her and he wants to show her that. She smiled and kissed him! Then, he told her about his fence jumping episode and she thought that was hilarious. He asked her if she would meet his family, and he said they are waiting in Spain if she wants to continue. Cassie said yes! She added that she doesn't know what she's ready for but that she felt good at that moment.

Colton and Cassie headed to Mallorca, Spain to meet his family. Anyone else wonder what Cassie's dad was thinking as this was going on? Colton met up with his family first and told them the whole shocking story about what has happened so far and why they are only meeting one woman. He told his family that he was no longer a virgin, but then quickly said he was just kidding. He was very honest in telling them that he is in love with Cassie and that she isn't quite there in her feelings for him. He's hoping that this week in Spain helps prod that along. Cassie had a major freak out session going into meeting them and she worried about the situation not being what they expected.

Cassie was very clear with his family that she didn't want to take any opportunities away from Colton. She was very honest and said there was a lot of things that have happened that she didn't expect. She is upset that she can't live up to that right now. His mom is seeing tons of red flags and she's terrified he's going to get his heart broken.

Meantime Colton's dad told her that when Colton falls in love he loves all the way. She said that freaked her out. She told his father that she loves Colton and cares about him but she wants clarity. Cassie admitted that it's pretty much a make it or break it week. Colton's mom asked her why she broke up with him initially. Cassie said it was the pressure of the commitment and the fact that he's always a step ahead of her in their relationship. She needs to find that same level of confidence. The thought of Colton getting his heart broken again brought his father to tears.
WATCH: Colton talks about Cassie and 'The Bachelor'


So now we got to just watch Colton and Cassie date in Spain and see if anything more could develop for her. She seemed jubilant going into their date so that was good. They drove in a jeep to the edge of the ocean where they would have a picnic - but they would have to rappel down the mountain to it! Nice Colton, make her freak out even more! But they managed to conquer their task and made it to the picnic. He asked her what scares her about being in a relationship with him. Cassie said it's not being in a relationship with him, but just being in one, in general, it is a commitment and that scares her because she dated someone in college and he even planned the proposal, but then it got very controlling. She basically doesn't want to lose herself. He told her he wants her to have her own interests, friends and be able to be herself. Cassie said that the things he said made her excited about being in a relationship with him.

It was sort of weird because the show was over, but it fell right back into the fantasy date format. It was like the evening they didn't have before was finally happening. Cassie said that if she does commit to being in a relationship he should know that it's because she sees their relationship going the distance. She told Colton that he has shown her what a good relationship can look like. She told Colton that however they leave it, she wants to be all in. Then Colton pulled out the fantasy suite card. I think it's weird they weren't staying in the same room this whole time! They should be spending every moment together so that they can figure this out. Anyway, she accepted. It was funny, they almost forgot to take off their microphones, but they remembered and shut the door. Did the magic happen for Colton?

Sydney, Onyeka, Demi along with Jason, Goose, and Ben were out as a roundtable to kind of talk about what could happen with Colton and Cassie. It didn't add much to this whole experience. Goose was surprisingly eloquent and it was nice for him to say that you shouldn't assume anything and maybe Colton and Cassie just had a really long talk to figure their situation out.
The next morning, Colton says he feels like a new man and says they had an amazing night that allowed them to grow as a couple. Cassie was giddy as Colton brought her breakfast in bed. Colton said that he's very happy and that people can "use their imagination." Cassie said that she was glad they had that night together. Cassie said, "What's next?" Colton said, "Give it our best shot...together." They both seemed excited to see where things could go. Aww! Please don't break Colton's heart Cassie!

On the live show, Colton and Cassie made their grand entrance. Chris Harrison said, "I am exhausted with you!" to Colton. Colton and Cassie said that they are in love. Cassie said they've talked about getting engaged but Colton joked that Matt Randolph is holding him back. Colton said that he just wants to be able to ask her father his permission again. Colton moved to Las Vegas for Cassie! They aren't living together just yet and will be traveling a lot so they aren't rushing things. They seem so happy though!

They have been having their happy couple weekends that the "Bachelor" allows and Cassie says that Colton is her best friend. She said she doesn't regret anything, but she wanted to be sure to let Colton know her true feelings. She told Colton that she absolutely loves him. Cassie revealed that she wrote that in her journal pretty early on. "I love you more than anything," Cassie said to Colton. YAY! Finally! Cassie said that she's glad he jumped the fence and ran to her. Colton then offered Cassie the final rose which she happily accepted! The show also gave them a 7-night stay in Thailand where they had their first one-on-one date. Air Supply came out to perform "Making Love Out of Nothing at All." They were great!

So...who is our next "Bachelorette?" SHOCKER of the season...it's Hannah B! Oh my goodness, this sort of came out of nowhere, but she's very compelling and I think it will be a great season. Chris Harrison had FaceTimed her to tell her a few weeks ago and she freaked out! She cried tears of joy. Then back in the studio, they paraded out five men for her to meet. The first was Luke who told her that she was the only one that he wanted to be "The Bachelorette." Hannah was blown away and started to feel a bit more comfortable. Next out was Dustin who brought out two champagne flutes to do a toast. Hannah likes to say, "same, same" a lot... Cam is from Austin, Texas and he dropped a beat and rapped. It was awful, but she thought it was fun. A very dapper and young looking Connor (Conner?) came out to meet her and made her a stepstool so that they could see eye-to-eye in their relationship (he's tall.) Lastly, Hannah met another Luke...this time Luke S. who dropped some sexual innuendo. He totally looked like Nick Viall! Even Chris Harrison thought so. Hannah decided she wanted to hand out a rose! She gave it to Cam the rapper! Just watch this guy be "the one!" Aw, he does actually seem to set her at ease! I think she'll have a really fun season. Hannah's season premieres on May 13th!
Report a correction or typo
Related topics:
arts & entertainmentcolton underwoodabc primetimethe bachelorettethe bachelorcominguproses
Copyright © 2021 KABC Television, LLC. All rights reserved.
COMINGUPROSES
Michelle meets the parents during hometowns...and your next 'Bachelor'
7 things to know about your new 'Bachelor' Clayton Echard
Michelle picks her final four men on this week's 'The Bachelorette'
Chris interrupts Nayte and Michelle's date on 'The Bachelorette'
TOP STORIES
Parents charged in school shooting arrested, plead not guilty
Bellflower residents are assaulted after finding home ransacked
CNN fires Chris Cuomo following suspension, investigation
Air regulators issue violation notices for Carson-area stench
Omicron COVID outbreak linked to Wisconsin wedding: health officials
Redlands burglary suspect arrested, allegedly touched sleeping boy
Hawaii to see blizzard with at least 12 inches of snow
Show More
Suspects in police vests beat, rob LA residents on doorstep
Money found inside megachurch walls possibly tied to 2014 theft
LA smash-and-grab arrests highlight concerns of zero-bail policy
How unusual to charge parents in school shooting? EXPLAINED
Homeowners burn down house in attempt to get rid of snakes
More TOP STORIES News