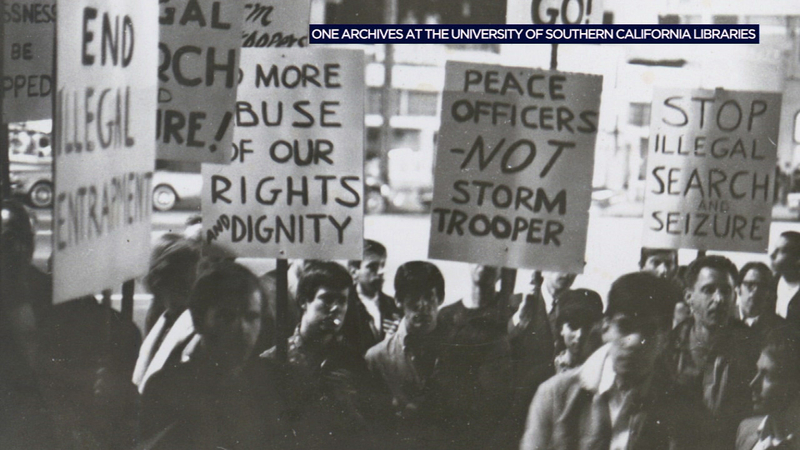 SILVER LAKE, LOS ANGELES (KABC) -- It was a frightening time to be a member of the LGBT community 50 years ago, and a historical marker at The Black Cat in Silver Lake reminds us of when and where citizens decided to make a stand.

Today the marquee of a smiling black cat blends with the bustling strip of Sunset Boulevard, but 50 years ago the site was at the forefront of a civil rights revolution.

It happened on New Year's Eve, as gay men kissed at the stroke of midnight as they rang in 1967.

"They began to grab people to arrest them for lewd conduct because at that time two men kissing was illegal," gay rights activist Alexei Romanoff said.

Undercover officers with the LAPD, without identifying themselves, started beating people at the gay bar.

"I felt rage that human beings could be treated like that for something that shouldn't be against the law," Romanoff said.

The gay community had enough. It was time to come out of hiding, and Romanoff would help organize the first known LGBT protest in American history on Feb. 11, 1967.

But assembling wasn't simple because being gay in public at the time was dangerous.

"The problems that gay men and women had in the 60s was it was illegal to be gay or to act on it in any way. It was also considered to be a mental illness and that was true in all 50 states," historian and Romanoff's husband David Farah explained.

Farah described a time in the 1960s when the LGBT community had no rights and was vilified. Even showing the slightest affection could mean going to prison.

"Lewd conduct at that time meant touching another man in any way. Just touching a shoulder or in the case of the New Year's Eve raids, it meant kissing for any length of time," Farah said. "If you were convicted you would then have to register as a sex offender."

That was the fate of many gay men arrested that New Year's Eve, including a man caught pecking another man's neck.

Actor George Takei recalled his fear of being a young gay man in Los Angeles.

"I was going to gay bars in Los Angeles and I always stood near the exit just in case," Takei shared. "These people were marched out, put in a paddy wagon, photographed, fingerprinted, their names on a list."

In 1967, it took enormous courage to protest, but surprisingly, mainstream news outlets decided not to cover the story, which was actually a good thing.

"It saved people from being outed. Because any one of these people, their family could see them," Romanoff said.

"That was the first time 500 to 600 men and women came together, that could be identified as being gay, in the United States and protested in public," Farah said.

On the 50th anniversary of the protest, the media was on hand as a crowd of people showed their appreciation for those who made their voices heard in 1967.

"For the first time people stood up and said, 'I'm queer and I'm OK and you either like it or leave me alone,'" Romanoff said.