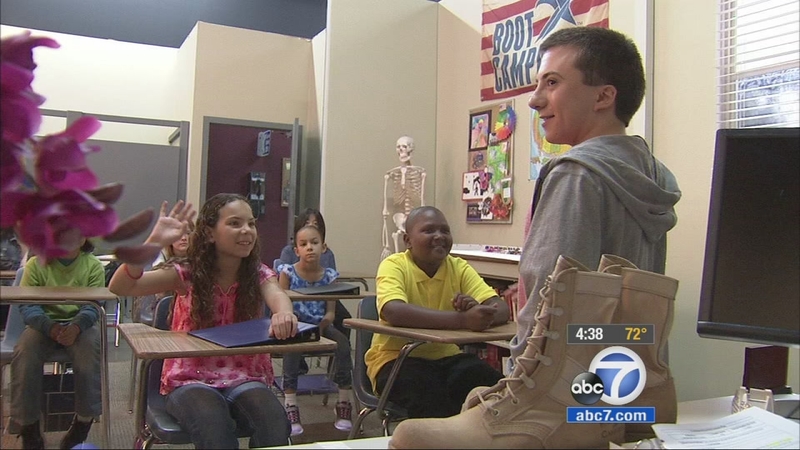 LOS ANGELES (KABC) -- Atticus Shaffer spends most of the year playing Brick Heck on the ABC comedy series, "The Middle."

But the 17-year-old actor has another job this summer: serving as celebrity ambassador for the Boot Campaign's new Patriot League Initiative, an educational program empowering teachers to promote patriotism among America's youth.

"Ever since I was little I've had a fascination with military, from what my Dad has told me, my Mom has told me," he said. "I've always wanted to give back to the military and find something I can do to kind of help with that passion."

Shaffer got involved with the Boot Campaign, a non-profit organization that focuses on raising awareness for the military, promoting patriotism, and providing assistance to veterans. It's then he was introduced to the Patriot League.

"They brought up the Patriot League to me, and I was like, 'this would be perfect for me. If you would give me the honor to be being able to be a part of this I would take it 110 percent,'" he added.

This week, Atticus and a group of young students shot a public service announcement that aims to help get the word out about the program's goals for young students.

"By the end of the week, or the end of the time through Patriot League, they can write critically about being an American or a patriot," said Joey Jones, Boot Campaign spokesman and retired U.S. Marine Corps. staff sergeant. "They can understand terms like honor and sacrifice, soldier, veteran, patriotism. So they learn those more patriotic and wholesome ideas that we believe make this country strong."

Shaffer has high hopes for his young counterparts.

"The youth are our next generation of patriots, the next generation of Americans," he said. "At some point, one of them is going to be running the country. So we need to make sure that everyone is holding true to that sense of patriotism and what it really means to be free and have the privileges that we have now in this country that in other countries are really only dreams."