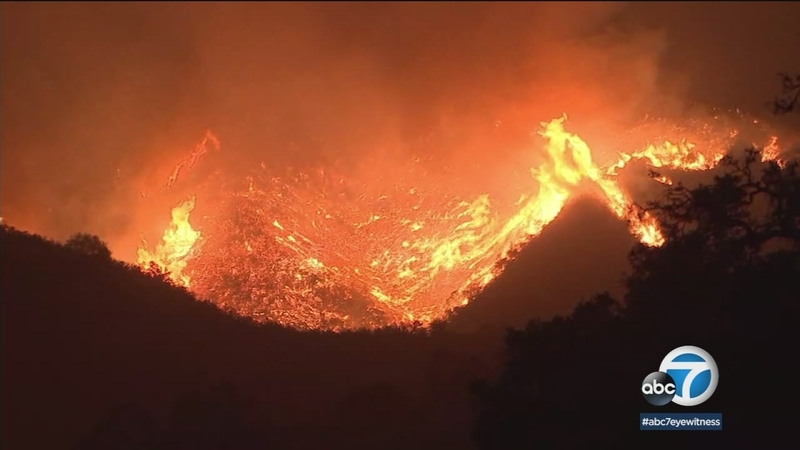 Winds pushed the fire west overnight, increasing its total area to 236,000 acres. Containment was estimated at 25 percent. It remains as the fifth largest wildfire in California history.

Fire officials said the blaze made its way further into Santa Barbara County, threatening the communities of Carpenteria, Summerland, Montecito and surrounding areas.

Thick smoke blanketed the area around Carpenteria as ash and soot rained down from the skies. It was difficult to see even two blocks down the street due to the thick haze.

Many residents were forced to wear masks and some businesses remained closed amid the toxic air conditions.

"This is pretty bad today. I think it's worse than it was yesterday," said banker Leo Fortunato. He said if his bank decided to open today, he'd consider wearing a mask even inside.

Firefighters were also prepared in case the fire moved closer toward the city of Fillmore.

Despite the active flames, Cal Fire officials described their efforts as successful along the Highway 126 corridor. They're not taking any chances, though, and have crews positioned above Fillmore just in case.

"We continue to have a challenge above Fillmore" said Mark Brown with Cal Fire. "We have personnel still in place should it flare up and move down the hill toward the town of Fillmore."

Currently, there are no mandatory evacuation orders in place within Fillmore city limits.

Santa Ana Winds are expected to persist in the fire zone as the red flag warning is expected to be in effect until Wednesday evening.

The Thomas Fire expanded by 2,500 acres overnight as the unrelenting blaze entered its ninth day Tuesday.

Firefighters from 856 engine companies were involved in the firefight, whose cost has reached $38.37 million, according to Cal Fire. Twenty-seven water-dropping helicopters and 48 water tenders were also in the burn area Tuesday.

Firefighters believe they have a few more days of good weather to get a handle on the fire before the Santa Ana winds kick up again.