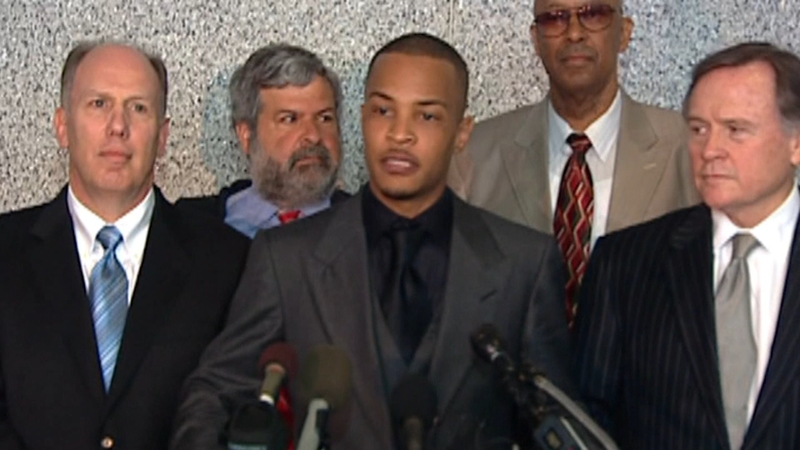 An attorney is asking two states to investigate rapper Clifford "T.I." Harris and his wife, singer Tameka "Tiny" Harris, in the wake of sexual assault and abuse and other allegations the couple have denied.

Attorney Tyrone A. Blackburn says he has been contacted by more than 30 "women, survivors, and witnesses" regarding claims against the couple.

At a press conference Monday, Blackburn reiterated his statement from a press release dated Sunday that he has reached out to prosecutors in Georgia and California to look into the alleged incidents. Blackburn says he has 11 clients.

Steve Sadow, attorney for the Harrises, provided a statement saying "Clifford (T.I.) and Tameka Harris deny in the strongest possible terms these unsubstantiated and baseless allegations."

"We are confident that if these claims are thoroughly and fairly investigated, no charges will be forthcoming," the statement reads. "The Harrises implore everyone not to be taken in by these obvious attempts to manipulate the press and misuse the justice system."

CNN has not spoken with any of the alleged victims and has not corroborated their claims.

It is unclear whether authorities have officially launched any investigations.

Blackburn says he sent letters to state authorities. The two obtained by CNN indicate one alleged victim was in California; five were residents of Georgia. All but one are referred to by aliases.

"We can confirm receipt of the letter," a spokesperson for the office of Georgia Attorney General Chris Carr said in an email. "That's all I'm able to share at this time."

A representative for California Attorney General Xavier Becerra wrote in an email: "To protect its integrity, we're unable to comment on a potential or ongoing investigation.

The Los Angeles County District Attorney's office said it could not confirm receipt of a letter.

Allegations against the Harrises first came to light weeks ago on social media after the couple's former friend, Sabrina Peterson, posted on her Instagram account that the rapper had put a gun to her head, though she said she did not call police about the alleged incident.

"Hold up... So you want your abuser to train your sons? He was just uncle 2 years ago," Tiny wrote in the caption.

Peterson, an entrepreneur, said on social media that after she shared her story, multiple women approached her claiming they had been assaulted and abused by the couple.

She shared the allegations on her Instagram stories, which self-delete after 24 hours.

In late January, Harris posted a video on his verified Instagram account denying that he and his wife had done anything wrong or that wasn't consensual. "Whatever we ever have done, has been done with consensual adults."

Without naming Peterson, Harris said he had "proof" that some of the stories that had been shared were invented to chase "clout" -- meaning to get attention.

In his earlier press release he said that "anyone who has suffered or witnessed any drugging, kidnapping, or raping by (the couple) may reach out confidentially" and he reiterated that on Monday.

"Three are non-sexual assault clients," Dumas wrote. "They are accusing T.I. and Tiny and their team of terroristic threats."

Blackburn claims the alleged victims don't know each other.

During the press conference, Blackburn briefly described the allegations involving six "Jane Doe" clients in Georgia and California, which he said include sexual assault, drugging and kidnapping.

Clifford Harris is from Atlanta and the couple frequently spend time in Los Angeles.

Blackburn said during the press conference that his office is "asking various law enforcement entities to investigate."

On Sunday, The New York Times reported that it had spoken with five of the alleged victims who, the letters, said "were drugged, raped or sexually assaulted by the Harrises or those in their orbit."

The publication reported having spoken to multiple friends and family members of the alleged victims who "said they were told of those episodes." The Times said it reviewed messages and photos in three cases that backed up the timeline of their claims.

Blackburn said that Sadow, the attorney for the Harrises, asked for the names of the women and wanted some kind of deal. "I told them my clients want justice," Blackburn said.

Sadow provided CNN with a statement later Monday saying that the claim that the Harrises wanted to make a deal is "patently false."

"I reached out to see if he would share any information since his name was posted on Instagram as the attorney for Sabrina Peterson."

"Blackburn repeatedly refused to provide the names of his accuser-clients or any corroborating or supporting evidence of his groundless claims," the statement went on to say. "The Harrises repeat that they are confident if a thorough and fair investigation is conducted, no charges will be brought."