LAX to expand rideshare pickup lot amid complaints from passengers 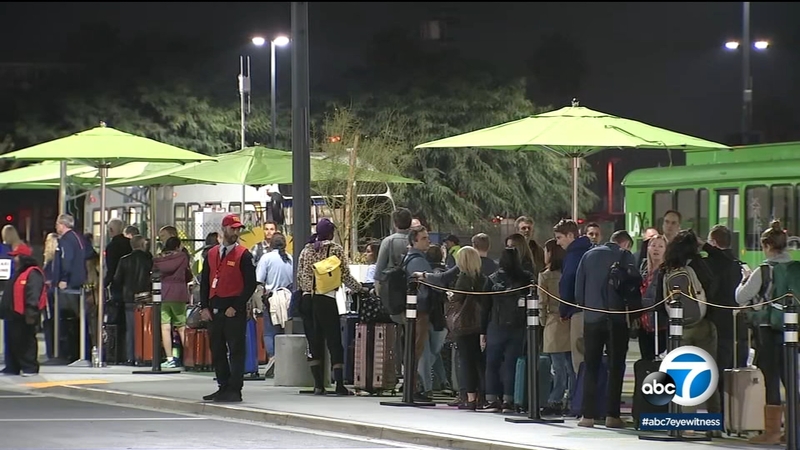 The airport announced it is increasing the size of the LAX-it rideshare lot, saying it is adding extra lanes in hopes of improving wait times.

The lot is expected to be expanded by 50% on Wednesday morning.

The change comes as travelers and drivers have been angered over long wait times and other issues hampering travelers from leaving the lot, including attempting to figure out which line to get into.

"We are pretty flexible and amenable when it comes to taking rideshares anywhere around the planet. This particular portion of the planet, it stinks," Mid-City Los Angeles resident George Peters said.

Other passengers say drivers have had difficulty entering the lot because of congestion. Some have also reported surcharges from Uber amid exorbitant wait times.

Some drivers said traffic was backed up to Sepulveda Boulevard, with it taking more than an hour to arrive at the lot.

Last week, the airport launched its new system, which is the only place where passengers can now grab a taxi or get picked up by Uber or Lyft.

A Los Angeles City Council committee held a hearing on the issue Tuesday and taxi drivers in particular expressed anger over the loss of business.

"We lose a lot of business actually," said taxi driver Yemale Gebrekirst. "Normally I was doing 10 to 12 trips in the airport before. But right now maximum four to five to six normally."

LAX officials also spoke, saying the changes were made necessary by an ongoing construction project ultimately aimed at reducing congestion at the airport over the long term.

They said other airports that have done construction projects on a similar scale "experience calamity that was unthinkable."

Councilman Joe Buscaino criticized Uber and Lyft for not sending representatives to the hearing.

"I'm disgusted and frustrated and upset," Buscaino said. "If we're going to solve this problem together we need the rideshare companies at the table along with our airport executives at the table to solve the problem."

Eyewitness News reached out to the two rideshare companies, who said they have been in constant communication with airport officials and they look forward to the expansion of the rideshare lot.

City Councilman Paul Koretz said he has heard complaints from advocates for the disabled, who say the new lots present problems for the physically challenged.

Airport officials told Eyewitness News the lot is compliant with the Americans with Disabilities Act.
The airport has a fleet of shuttle buses to carry passengers from the terminals to the LAX-it lot, which are scheduled to arrive every 3-5 minutes during peak hours. New signs have gone up with bold letters and directions painted on the pavement. More shuttle buses have also been added to the fleet.

"I was anticipating it being kind of crazy, 'cause the airport was crazy, but looks like they're ironing out some kinks," Santa Monica resident Jordyn Snider said.

RELATED: LAX apologizes after livid travelers get stuck for nearly an hour in shuttle on day 1 of ride-share ban

LAX also implemented measures aimed at reducing chaos and long delays after travelers were outraged about getting stuck in a shuttle for nearly an hour on the first day of the airport's rideshare ban.