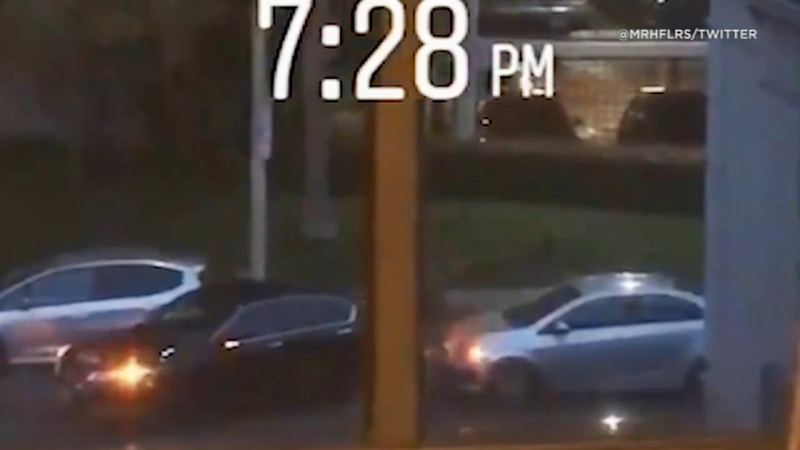 KOREATOWN, LOS ANGELES (KABC) -- When Mariah Flores peered out of her Koreatown apartment to see a peaceful but prolonged dispute over a curbside parking space, little did she know that her real-time chronicle of the incident would soon go viral on social media.

The late-afternoon tiff was first shared with the world as an Instagram Story, appropriately titled "Car War." The series of videos and photos begins with a snapshot taken from across the street.

"This car is blocking this other car from grabbing this prime spot," says the caption, accompanied by two respective arrows pointing at two vehicles, one black, one silver.

The person behind the wheel of the black sedan had apparently driven slightly past an available parking space with the intention of backing up into it - "and the silver car was like 'absolutely the f--- not' and did a classic box-in," according to Flores, whose Twitter handle is @mrhflrs.

What followed was a slew of gripping video clips, duly captioned, that showed the status of the standoff:

"Still here but now they have turned on their flashers."
"Petty level 6,000 unlocked."
"This standoff is creating drama outside the duel. Passerby are forced to go head to head with oncoming traffic very dangerous situation."

Amid the drama, Flores asked her followers if they were "Team Black Car" or "Team Silver Car." She even performed a "half-time show," consisting of a selfie video of herself dancing solo in her apartment.

The ordeal stretched on for more than an hour. The sun went down. The drivers remained in their vehicles.

Then, a breakthrough. A vehicle parked nearby drove away. Two parking spots were now available. The black and silver cars both parked alongside the curb - but neither driver got out - at least, not right away.

"Should I go talk to them?" Flores asked. "Just a knock on the window to tell them I love their work."

After another prolonged wait, the driver of the silver car exited that vehicle, and the saga came to an end. But not for Flores, who was determined to hear each motorist's side of the story.

"Your resilience is inspiring," she wrote in a note that she later placed on the silver car's windshield, asking to be contacted by email. "Thank you for the hour & a half of entertainment. I'll never forget you."

To the black car's driver, she wrote: "I was always on your team, I really thought you would win, but am happy with the way things turned out. Everyone on my Instagram said you deserved the spot."

To add to the fun, this exact scenario played out on an episode of "Seinfeld."

Flores later shared the story in a Twitter thread, whose first tweet has since received more than 49,000 retweets and 125,000 "likes."

Even celebrities like Chrissy Teigen joined in on the conversation.

black car wasn’t just driving then saw in his rear view mirror there was a spot behind him. He passed it on purpose. TO PARALLEL PARK. anyone saying silver car - U ARE A MEAN AND BAD DRIVER!

The woman who captured it all spoke to Eyewitness News about the drama.

"They were just on their phones, sitting there being patient," Flores said. "It was like a really beautiful display of patience."

She added that she was glad the standoff didn't escalate to something more serious.

"I'm so happy it was a nice, happy ending," she laughed. "Very dumb, if I'm honest. It's very dumb, like, I'm viral for watching... also sitting and doing nothing for an hour and a half."