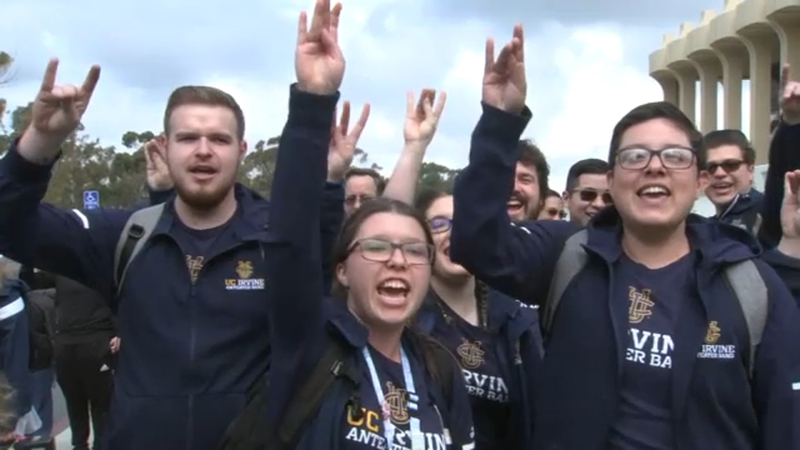 IRVINE, Calif. (KABC) -- Dozens of fans, parents and grandparents lined up to send off the UC Irvine men's basketball team as they left for the NCAA tournament on Wednesday.

The Big West champions boarded a charter bus to cheers from a spirited crowd.

"We're just really excited to see the guys go out and compete. I think it's awesome to bring some attention to the basketball program down at UCI," said Jackson Hunt, a UC Irvine grad student.

Eager Anteater fans lined the street to see the team who will make only its second ever appearance in the tournament, both under head coach Russ Turner.

"Thank you all for coming out. This morning, send us on our way, we might be gone for a while," Turner told the crowd.

The Anteaters are making the short trip to San Jose for their first-round match up against Kansas State. Many of the players' families already have their tickets booked to watch these men achieve their dream of being part of March Madness.

"I have followed him since he was very, very young, about 4 years old, he started playing basketball, and I've tried to keep up with him," said Barbara Jordan. Her grandson Evan Leonard is a junior on the team.

The anticipation is over. The UC Irvine Anteaters know where they're playing in the NCAA Tournament.

The Anteaters are the No. 13 seed in the south region, matched up against No. 4 seed Kansas State.

All of the fans at the send-off are hoping for an upset, except one -- a UCI law student who has a tough choice to make.

"So, I went to undergrad at Kansas State and made my way here for law school, and here I am representing my dual loyalty," said Luke Hartman.

Call them an underdog, a Cinderella story, whatever you want -- these Eaters have their dancing shoes on and are ready for more.