LA sports fans hoping for another title as UCLA, USC advance to Elite 8 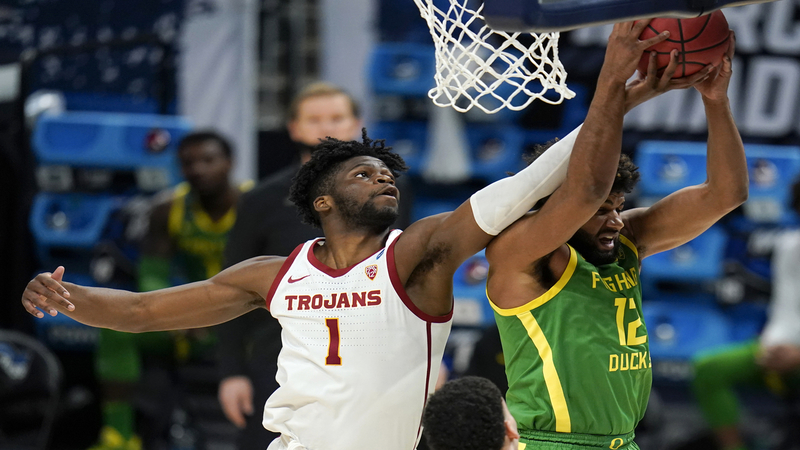 LA sports fans hoping for another title as UCLA, USC advance to Elite 8

LOS ANGELES (KABC) -- Los Angeles was once again a city of champions last year, with major titles won by the Lakers and Dodgers just a few weeks apart.

Now the City of of Angels has another shot at sports glory, this time in college basketball.

USC and UCLA this weekend both advanced to the Elite Eight of the NCAA men's basketball tournament, the first time both teams from Los Angeles have made it that far in the same season.

If both win their next matchups, the two schools would face each other in the Final Four.

This is the first time USC & UCLA have both advanced to the #Elite8 in the same Tournament! #MarchMadness #BackThePac pic.twitter.com/403XZrcNVU

That's a big if. The two teams face tough opponents this week.

The No. 11 Bruins play the top-seeded Wolverines Tuesday night in Indianapolis.

That's after this weekend upsetting the 2-seeded Alabama Crimson Tide to move on to the Elite 8 for the first time since 2008.

The Bruins pulled off the 88-78 upset in overtime behind Irvine native sophomore Jaime Jaquez who scored 17 points and brought down 8 boards. Sophomore Jules Bernard, a Los Angeles native, scored 17 points with six rebounds.

RELATED UCLA pulls off overtime upset over Alabama, moves to Elite 8 for first time since 2008

In the history of their matchups, UCLA has beaten Michigan in three of their four NCAA tournament games, including the 1965 national championship in Portland, Oregon.

It won't be easy this year, as Michigan, coached by alum Juwan Howard, went 22-4 this season and is considered one of the top teams in the tournament.

But arguably no team has been playing with more confidence than UCLA. Johnny Juzang and Jaime Jaquez have been dynamic scorers for the Bruins through the tournament run: They average 21 and 16.8 points per game, respectively. With good defense to complement their offense, UCLA could book their ticket to the Final Four.

Sunday night, the Trojans also advanced to their first Elite Eight appearance in the tournament since 2001, after dominating Oregon throughout Sunday's matchup.

The game was the first ever Pac-12 matchup in the NCAA men's basketball tournament. Behind Isaiah White's 22 points and Tahj Eaddy's 20, USC led most of the way, at one point opening up a 21-point gap and eventually ending in a final score of 82-68.

USC has an even tougher challenge ahead, as the No. 6 Trojans face undefeated Gonzaga Tuesday afternoon.

The No. 1 Bulldogs boast the best offense in the country, scoring an average 91.8 points per game. They beat each team they've faced in the tournament with double-digit scoring margins of 33, 16 and 18, respectively, through three games.

But USC is also a great offensive team, led by potential top-three NBA draft pick and Pac-12 Player of the Year, freshman Evan Mobley. Mobley is averaging a double-double so far in the tournament, putting up 12.3 points and 10.7 rebounds a game to go along with his 2.7 blocks per contest.

Another factor making Gonzaga tough to beat has been their dominance on the glass, outrebounding tourney opponents by 35 through the first three rounds.

But the Trojan roster is one of the tallest in the tournament, leading the nation in blocks and standing among the best on the boards.