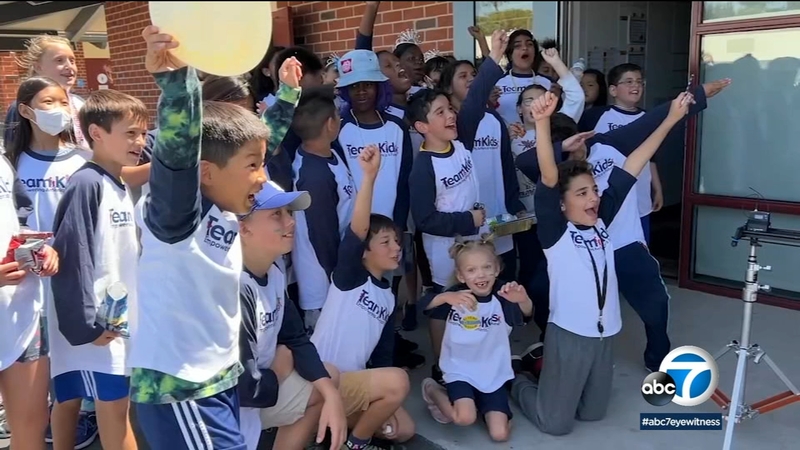 IRVINE, Calif. (KABC) -- Four-year-old Kristina Minzianov and her family enjoyed a day at a student carnival Friday put on by Team Kids at University Park Elementary to help children in Ukraine.

In late February, Pertrovska made a video with her four-year-old daughter in tears and a message- stop Putin.

The Ukrainian family said they came to the U.S. on a visa, after surviving the attacks. The videos on their cell phones show the plumes of smoke visible from their home windows. The family was forced to shelter in an underground paring structure.

Friday, the family had a very different day attending a carnival at University Park Elementary put on by students with the nonprofit Team Kids.

Team Kids is celebrating its 20th anniversary. The nonprofit teaches programs in elementary schools from Irvine to Brooklyn in New York City.

"We ask them if you had a magic wand, you could change the world, how would you want to change the world? The students here at University Park, as part of their annual Team Kids challenge, voted on helping the children and families from Ukraine. So this came from them this is their voice and today was a perfect example of just how powerful kids' dreams are to change the world," Hudash said, adding, "and how critically important it is to give kids a chance to make a difference in kids' lives," Hudash said.

The main focus for the carnival were donations of and funding for baby formula and medicine.

Students Parnian Yazdani and Jade Thomas shared why they joined the efforts.

"We're all people and we need to have kind hearts and like care about other people," Thomas said.

"I really want to help them and this is just a really great opportunity for me," Yazdani said.

It was a day where kids could just be kids- spending time with firefighters and police officers, but changing the world one game at a time.

"You know I think it's a big reflection of the type of community we have here. Our children are so involved in the community, giving back to the community. This is one of many examples," Irvine Police Dept. Chief Michael Kent said.

It was a community event, welcoming families who lost everything.

"Thank you Team Kids for a very nice day today because it makes us smile. Thank you," Pertrovska said.

Hudash said as of Friday afternoon, Team Kids students had raised more than $2,000 in carnival tickets worth a quarter each.