Complaints are piling up about slowdowns with the delivery of mail by the Postal Service.
KABC
By Rob McMillan 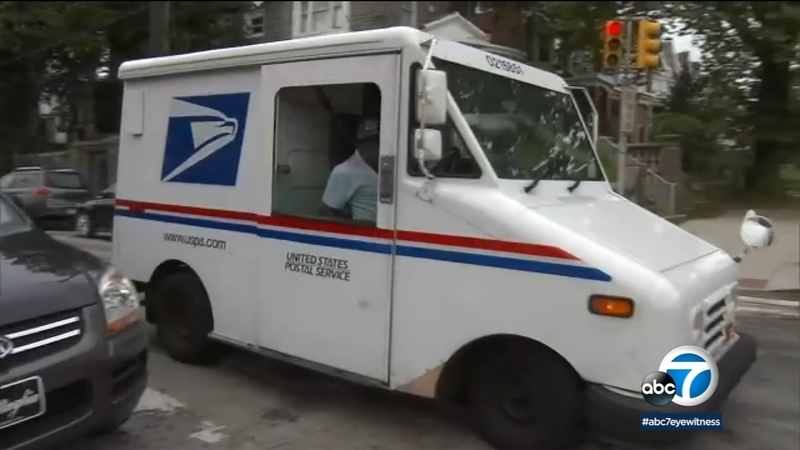 Complaints are piling up about slowdowns with the delivery of mail by the Postal Service.

Viewers have reached out to Eyewitness News claiming some deliveries are instead being made later at night. Others have complained that they haven't had any deliveries at all over the past several days.

Nick Casselli, a representative with the American Postal Workers Union in Philadelphia, said mail isn't being delivered at the rate it should be.

"My union reps are calling me throughout the night and the morning and say the mail is all over the place," said Casselli. "They're just not getting it out."

"We're not providing the services we provided 24/7 before Mr. DeJoy was appointed Postmaster General," Casselli said.

Louis DeJoy was appointed to the position of Postmaster General in mid-June by President Donald Trump. DeJoy recently prepared remarks for the USPS Board of Governors suggesting a dire financial situation for the Postal Service.

"Our financial position is dire, stemming from substantial declines in mail volume, a broken business model and a management strategy that has not adequately addressed these issues," wrote DeJoy.

"As a result, the Postal Service has experienced over a decade of financial losses, with FY 2019 approaching $9 billion and 2020 closing in on $11 billion in losses. Without dramatic change, there is no end in sight, and we face an impending liquidity crisis," the statement said.

Trump has also been critical of the Postal Service, threatening to hold back on a $10 billion loan approved by Congress.

"The Postal Service is a joke," said Trump in early April. "They're handing out packages for Amazon and other internet companies and every time they bring a package, they lose money on it."

In an official statement to Eyewitness News, a Postal Service spokesperson blamed many of their recent difficulties on the COVID-19 pandemic.

"The COVID-19 pandemic has led to heavy parcel volumes as customers continue to place online orders of essential items as they shelter in place," said spokesperson John Hyatt. "U.S. Postal Service Priority Mail products and First-Class packages may require more time to be delivered due to limited transportation availability.