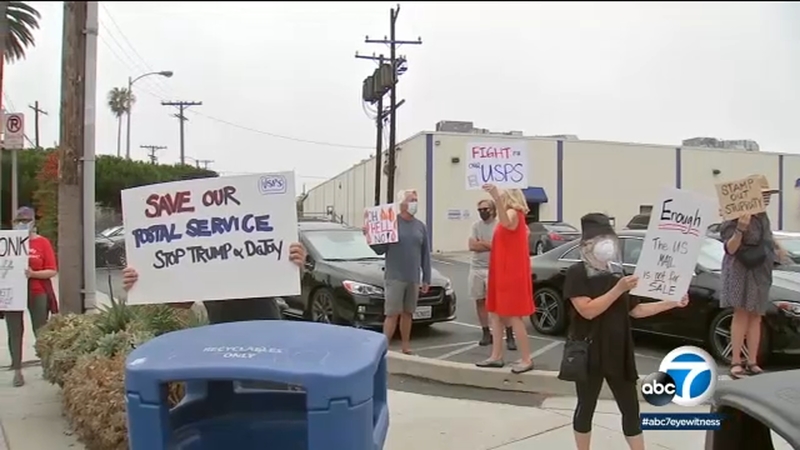 VENICE, Calif. (KABC) -- The controversy surrounding the U.S. Postal Service and its recent slow down in delivery times is now spurring local protests.

About a dozen people staged a demonstration outside the Venice post office Monday afternoon.

Protesters say they're upset that the Postal Service's new Postmaster General Louis DeJoy is cutting back overtime for mail carriers and ordered the removal of dozens of high-speed mail sorting machines ahead of the November elections. The postal service is already warning 46 states that ballots might not be delivered in time to be counted.

"Our mail has slowed down a great deal. Some days we haven't even had deliveries," said demonstrator Tony Quin. "So, there's something really strange going on."

People across the country have also documented the removal of mailboxes from street-side locations. Residents in Goleta placed flowers and notes where mailboxes were taken away.

Several mailboxes in Burbank were locked closed over the weekend, and people looking to use the post office there say they faced long wait-times.

The United States Postal Service is at the center of a heated debate over mail deliveries and the impact on the presidential election. On Monday afternoon, three members of Congress voiced their outrage over recent changes and with President Trump.

"The line was all the way out onto Hollywood Boulevard," complained Burbank resident Paul Savage. "So I came around to find a spot and then go inside and see the line all the way through the building."

A U.S. Postal Service spokeswoman tells Eyewitness News that the slowdown in mail deliveries is due to the COVID-19 pandemic and that more people have been placing online orders for essential goods, leading to heavy parcel volumes.

"Our employees in Greater Los Angeles area post offices are working diligently to keep up with the increased volume and we are in process of hiring additional temporary employees to meet the needs," said Evelina Ramirez of USPS Corporate Communications. "We are flexing our available resources to match the workload and appreciate the patience of our customers and the efforts of employees as conditions change on a day-to-day basis."

As for the locked mailboxes, the postal service says its to prevent mail theft outside normal service hours and has been policy in known theft areas since 2016. Monday morning, the Burbank mailboxes were unlocked and open.
President Trump told reporters Monday that the recent changes are designed to make the postal service profitable.

The USPS said it's common practice for mailboxes outside post offices to be locked on days they are closed to prevent vandalism.

"I have encouraged everybody, speed up the mail!" the president said. "Not slow the mail."

But that is not the way Speaker of the House Nancy Pelosi sees it. She's calling the House back into session this week for a vote Saturday on legislation to block the changes ordered inside the postal service.

On Monday afternoon, three Congress members expressed outrage as the slow down in mail delivery is affecting people across the country. Representatives Maxine Waters, Nanette Barragán and Jimmy Gomez say all of their offices have been flooded with complaints from constituents who aren't receiving mail, medication and items for their small businesses.

"This is not a Republican or Democratic issue. This issue affects everyone across the country," Barragán said.

The House will vote on the "Delivering for America Act," a piece of legislation to retroactively repeal the operational changes implemented by USPS's newly-appointed Postmaster General Louis DeJoy. It comes as DeJoy has been making what he calls "cost-cutting measures" which is slashing overtime for mail carriers. They're also removing high-speed sorting machines and many mail boxes across the country have been removed.

"I want this president and I want his lackey to get those blue boxes back in our neighborhoods," Waters said.

"Not only do those changes slow delivery down, it's creating a huge backlog and it could be catastrophic for the November elections"

The local union president in South Los Angeles says the removal of boxes is not standard practice.

"They normally remove them to repair them and put them back. But at the scale that they are moving them now it's not what I've seen in 27 years. It's the first time I've seen stacks of them being removed and they're not damaged," said Eddie Cowan, local president with the National Postal Mail Handlers Union.

What's happening at the US Postal Service, and why?
EMBED More News Videos