Mayor Garcetti says LA employees who aren't vaccinated by Dec. 18 'should be prepared' to lose jobs

The deadline was initially Wednesday. However, under a proposal, pending approval, workers would have until Dec. 18 to show proof.
City News Service 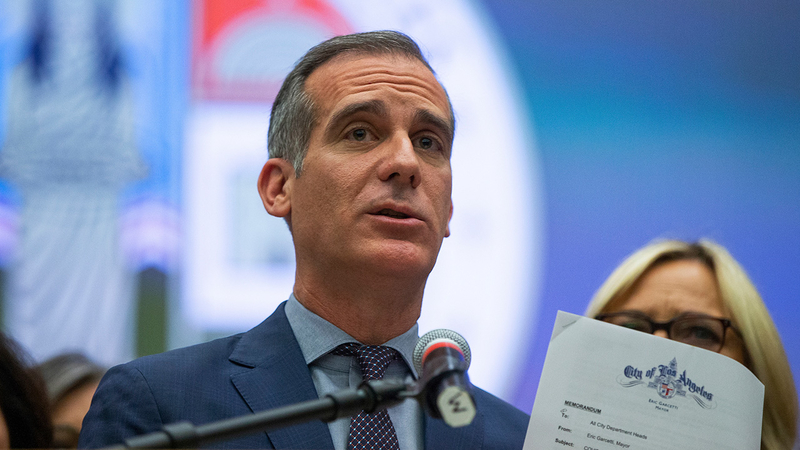 Garcetti to LA city workers: Get vaccinated by Dec. 18 or lose job

LOS ANGELES (CNS) -- Mayor Eric Garcetti said any city employee who refuses to get vaccinated against COVID-19 by Dec. 18 "should be prepared to lose their job.''

The deadline was initially Wednesday for Los Angeles' mandate that all city employees be vaccinated. However, under a proposal submitted Tuesday by the city administrative officer, pending City Council approval, workers would have until Dec. 18 to show proof of vaccination.

As of Wednesday morning, a date had not yet been set for the City Council to officially approve the plan, according to Council President Nury Martinez' office, but Garcetti released a statement Wednesday morning saying employees had until Dec. 18 to be vaccinated.

"The city's employee vaccine mandate is critical to protecting the health and safety of our workforce and the Angelenos we serve,'' the mayor said. "Employees must be vaccinated by December 18, and we are putting a rigorous testing program into place in the meantime. Let me be clear: Any employee who refuses to be vaccinated by this date should be prepared to lose their job.''

Parents, teachers and some children took part in a series of protests across Southern California Monday as part of a statewide pushback against California's vaccine mandate for students.

The proposal to extend the deadline was submitted to the City Council as a resolution.

Until Dec. 18, according to the proposal, unvaccinated employees would have to submit to two COVID-19 tests per week, and $65 per test would be deducted from their paychecks.

Employees would have to get tested during their free time, and testing would have to be conducted by the city or a vendor of the city's choosing.

Third party tests would not be allowed.

According to data from the mayor's office Tuesday, 72.8% of city employees reported being fully or partially vaccinated, 17.9% either declined to state or did not report their status and 9.2% reported they were not vaccinated.

Those seeking religious or medical exemptions would also be required to take two tests per week at the employee's own expense while the city processes the exemption request.

If an exemption is approved, the employee would be reimbursed for testing costs and going forward would be required to test for COVID-19 once per week, but the city would pay for it.

If an exemption request is denied, the employee would have five business days to file an appeal. If they do not appeal the decision, they would be issued a notice that they must submit proof of vaccination.

Failure to do so would result in "corrective action,'' but details were not released.

The proposal also states that the employee would be able to either resign or retire "all in good standing in lieu of discipline'' if they did
not comply with the vaccination mandate.

Exemption requests are evaluated on a case-by-case basis.

People can qualify for an exemption if they have a medical condition or sincerely held religious beliefs, practices or observances that prevent them from receiving the vaccine.

"How can we ask Angelenos to be vaccinated if we are not doing it ourselves? We need to set the strong example for our communities. The vaccines are available, they're effective, and they're keeping people out of the hospital and off ventilators,'' Council President Nury Martinez said when the ordinance was approved in August.

Many workers who don't want the vaccines say it's an issue of personal freedom.