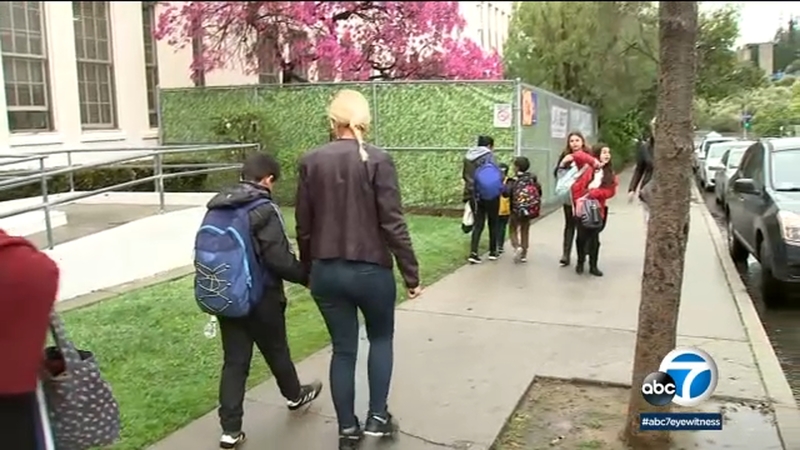 As Gov. Gavin Newsom released details for California elementary schools seeking to return with in-person instruction amid the coronavirus pandemic, one of the state's two powerful teachers unions warned that reopening campuses would be "reckless."

It was not immediately clear how many public and private schools might apply for waivers to reopen elementary schools, but the idea of using classrooms in counties with increasing case numbers is misguided, said Jeff Freitas, president of the California Federation of Teachers, which represents 120,000 education employees.

"We think that's dangerous and compounds the effects of spreading the virus," said Freitas. He noted that last Friday, California reported 215 deaths, its highest daily toll. "We broke the record for the most number of deaths just a few days ago. And now we're talking about waivers for reopening schools?"

Rules announced earlier this month by Newsom all but ensure the vast majority of the state's K-12 schools serving 6.7 million students won't reopen classrooms when the academic year starts. Newsom stipulated that public and private schools in counties on a state monitoring list for rising coronavirus infections and hospitalizations can't hold classroom instruction until their county is off the list for 14 days.

There are 38 counties representing more than 90% of the state's population on the list.

Los Angeles County health officials on Tuesday announced that they will not consider any applications for waivers to open elementary schools for in-person instruction.

The waiver application, released Monday by the state Department of Public Health, applies to kindergarten through sixth-grade schools seeking to reopen in the 38 counties. It recommends that local health officials not even consider waivers in counties with the highest rates of coronavirus infection - more than 200 cases of COVID-19 per 100,000 people - over two weeks. That's the case in 14 counties, including Los Angeles, Riverside and San Bernardino, with several others just below the threshold.

The waivers only apply for kindergarten to sixth grade because health officials say those students are less likely than older children to become infected or transmit coronavirus. For most people, the new coronavirus causes mild or moderate symptoms, such as fever and cough that clear up in two to three weeks. For some, especially older adults and people with existing health problems, it can cause more severe illness, including pneumonia and death.

Reopening plans must cover a raft of safety issues, such as disinfecting, health screenings, social distancing and mask-wearing for staff and students. The ability to keep children in "small, stable" groups should be one qualification, according to the guidelines. The guidelines do not specify group sizes but Secretary of Health and Human Services Mark Ghaly said Tuesday that groups of four to eight children are ideal.

Among other things, the state's guidelines say schools seeking waivers must have support from labor, parent and community organizations, though it's unclear how "support" will be measured.

Private schools, most of which are not unionized, may have more luck given the overwhelming objections California teachers unions have raised to the idea.

Among private schools, there is "considerable interest" in waivers, said Ron Reynolds, executive director of the California Association of Private School Organizations.

"I think every private school would like to resume in-person instruction at the earliest possible date at which it is deemed safe to do so," said Reynolds, whose group includes two dozen private school organizations. "The challenge is to strike an appropriate balance," he said, adding that schools will be working closely with public health authorities to make sure a waiver application meets the extensive health and safety criteria.

Schools seeking the waivers need to apply to their local health office, which will consider the request and decide whether to submit it to the state Department of Health for final consideration.

California's largest school districts have already announced they will start the year with remote learning. Los Angeles Unified School District, the nation's second-largest district with nearly 735,000 students, will start the school year with only distance learning in two weeks.

"Los Angeles County's case rate currently is 355 per 100,000 and we will not be considering waiver applications, at this point in time," it said in a statement. When the rate falls to acceptable levels the decision will be reconsidered, it said.

"We know that to many families, this is a disappointing announcement," the public health department said, adding, "We need to ensure the health and safety of our children, school teachers and staff and all of their families."
EMBED More News Videos

California public health leaders on Monday outlined guidelines for how some elementary schools across the state may return to in-person instruction.

Just a day earlier, district Superintendent Austin Beutner had said the district planned to provide at least some classroom instruction if it received a waiver.

In the San Francisco Bay Area, Santa Clara County Public Health officials issued a directive two weeks ago encouraging elementary schools to seek the waiver. It noted that in-class instruction is critical for younger students, and that child care would be needed when schools are shuttered, which means "closure of elementary schools is less likely to significantly reduce transmission."

On Tuesday, Santa Clara Unified School District spokeswoman Philippa May said all students will start the school year with distance learning and the district had not applied for any waivers.

With most districts announcing remote learning, some families are hiring private tutors and arranging school pods that some call a luxury only available to the well-off.