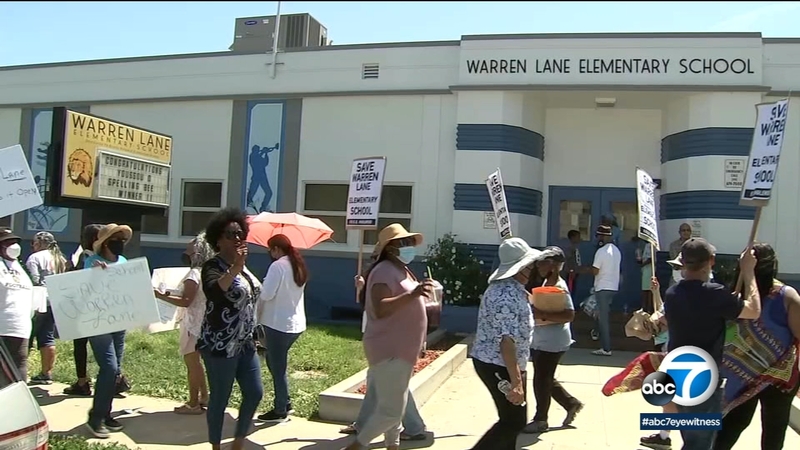 INGLEWOOD, Calif. (KABC) -- The parents and grandparents of children who attend and attended Warren Lane Elementary school in Inglewood are fighting mad over the school's pending closure.

Located in a working-class neighborhood, the school, which used to be named Daniel Freeman, is one that generations of parents walked their kids to.

As new residents move in, they want to keep it open for their children.

"All of these people live right here," said Taj Powell, a parent who lives nearby. "This school is literally a block away from my house. So it's also important to give this school a chance."

Because of financial troubles, the Inglewood Unified School District has been in receivership and run by the state for 10 years. Bond measures have passed to help out. The district reportedly says lower enrollment is why the school is being closed.

Parent Tina McKinnor told Eyewitness News: "It is important that this community has great public schools for the kids to go to. If we start closing down schools, where do the kids need to go?"

Parents who attended Friday's protest said they knew that since the district is in receivership, they have one option left to reverse the districts decision: to go straight to Sacramento and convince the state superintendent to keep the elementary school open.

"Inglewood Unified is not alone in needing to face challenging school closures. Districts across California are facing difficult decisions to close schools as the state experiences lower birth rates and a shifting population. In 2020, the Public Policy Institute of California projected a 7% decrease in enrollment in the next 10 years. The pandemic has only exacerbated the loss in enrollment for schools.