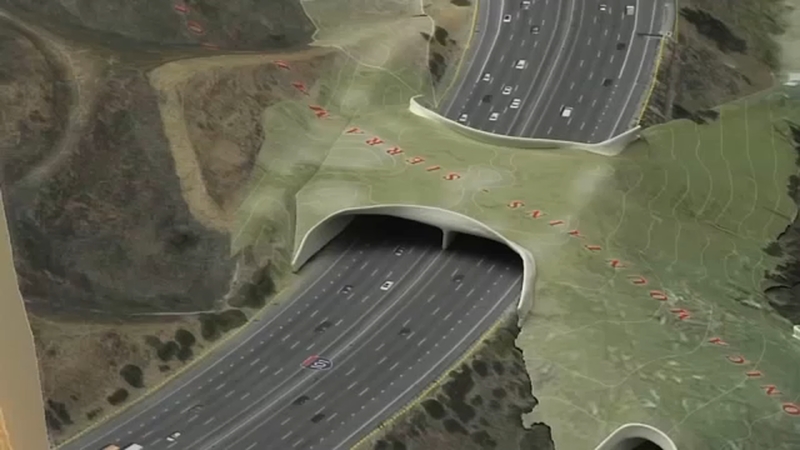 AGOURA HILLS, Calif. (CNS) -- The National Wildlife Federation's #SaveLACougars campaign announced today that philanthropist Wallis Annenberg and the Annenberg Foundation have made a record $25 million conservation challenge grant to help break ground on a wildlife crossing over the 101 Freeway in the Liberty Canyon area of Agoura Hills.

The campaign has already raised more than $44 million with the grant and needs to secure an estimated $35 million to "unlock'' the challenge grant and to break ground in November on the landmark project at a location that is a formidable and virtually impenetrable barrier for many wildlife species, including mountain lions, bobcats and mule deer.

The wildlife crossing is expected to be the largest of its kind in the world, spanning 210 feet over 10 lanes of highway and pavement along with an access road, and is the first to be significantly funded through private donations along with public support, according to the National Wildlife Federation.

The wildlife crossing -- which will include a landscape design that will blend the structure into the surrounding mountain habitat -- will provide a connection between the small population of mountain lions in the Santa Monica Mountains and the larger and genetically diverse populations to the north and help to protect the endangered mountain lion population and other wildlife in the area.

"It's reconnecting the ecosystem, not just getting animals across the road,'' Beth Pratt, the National Wildlife Federation's California regional executive director and leader of the #SaveLACougars campaign, told City News Service.

Wildlife crossings are powerfully effective at restoring ecosystems that have been fractured and disrupted, according to Annenberg, who is chairman, president and CEO of the Annenberg Foundation.

The fundraising campaign to create a wildlife crossing over the 101 Freeway in Agoura Hills to help the mountain lion population has reached the $18 million mark, putting the groundbreaking within sight.

"It's a way of saying, there are solutions to our deepest ecological challenges, and this is the kind of fresh new thinking that will get us there,'' Annenberg said in a statement announcing the challenge grant.

"To me, this is an important local and regional initiative even a model for the kind of change we need all around the world. I'm enormously proud that California is in the vanguard of this effort, and that our foundation can be a part of it too. Our hope is that a strong state and federal role won't be far behind."

Collin O'Mara, the National Wildlife Federation's president and CEO, said the challenge grant is the largest ever received by the organization and puts it closer to breaking ground on the project later this year.

"Wallis Annenberg's grant will protect this global biodiversity hotspot -- recognized as one of only 36 biodiversity hotspots worldwide -- and ensure that California's iconic mountain lions and other wildlife can find the food and mates they need to survive by reconnecting the Santa Monica Mountains and the Simi Hills and beyond,'' O'Mara said.

More information about the campaign is available at https://savelacougars.org.